There will be another reggae remake of a classic album, but no one’s saying what it will be
Sep 3, 2010 6:56 AM By: Stephen Smysnuik 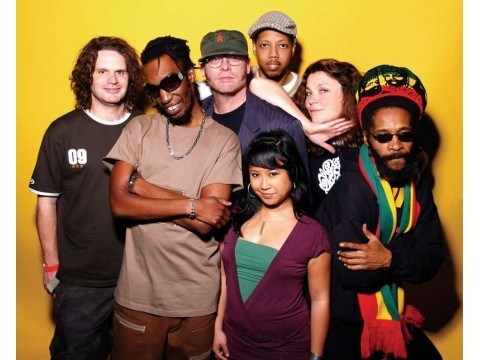 Who: Easy Star All Stars

Music geeks have spent far more time than necessary dreaming about, debating with friends and deliberating what album the Easy Star All Stars will cover next.

Since 2003, the New York-based collective has recreated three of the most highly-regarded albums in popular music history - Pink Floyd's Dark Side of the Moon , Radiohead's Ok Computer and the Beatles' Sgt. Pepper's Lonely Hearts Club Band - as reggae albums. Their music has helped bridge a gulf between dub, reggae, rock and indie fans, people who might otherwise never be in the same venue at the same time.

So whatever album they recreate next has to step in line with these three classic albums. What'll it be, boys?

"What we're working on is an original full-length," says All Stars drummer Ivan Katz, speaking from their tour bus en route to Vancouver.

But alas, original new songs it must be. They released Until That Day, an EP of original material, in 2008 and have been working on/recording new material on the road ever since.

That doesn't mean the Easy Star All Stars consider themselves sonic torchbearers of Pink Floyd or the Beatles. Not at all. Playing other people's music is well and good but creative people need to, well, create .

"As the band goes on the road after all these years, we've made all this music together so we're really excited right now, in addition to these cover albums, to go in and record this album," Katz says.

The All Stars project is the brainchild of bandleader and producer Michael Goldwasser, who picks what classic albums the band will cover. He also writes the arrangements, produces the albums and hires all vocalists and musicians.

The covers projects are wildly ambitious - all three albums are already imposing, fully-realized albums that don't really need reinterpretation. Any one of the albums could have floundered in the band's attempts to redo, or even outdo, the originals but the recreations are tasteful and respectful. Every song on all three albums contains the elements that lend themselves to a reggae conversion - strong melodies and trippy soundscapes.

Radiohead guitarist Johnny Greenwood called Radiodread "truly astounding." Thom Yorke gave his blessing. Roger Waters's "people" supposedly like Dub Side of the Moon but the All Stars don't know if that came from the Pink Floyd songwriter personally. There was also a rumour that Paul McCartney was supposed to sit in with the band during their set at last year's Glastonbury, but that never happened.

Regardless, Katz says it's "an honour" that these men are paying attention at all.

"We want them to love the music and we want them to appreciate that we're not just covering their music, we're taking it and reinventing it in our own style," he says. "That's the essence of art, reinventing something that inspires you. It's totally an honour. It's a big thrill for the whole label."

That label is the New York-based Easy Star Records, which started out in 1996 recording and selling seven-inch singles of original reggae music as well as compilation albums of reggae from the 1970s and 1980s. It wasn't until they released Dub Side of the Moon that the label really took off.

That album and the two follow-ups have been three of the top-selling reggae albums of the last decade - no surprise given their cross-over appeal - and have earned Easy Star records credible status as a major player in the reggae worldwide.

But anyway, if anyone gets a chance to speak with the band after their set at the GLC, don't bother asking what the next cover album's going to be. Katz says that's "top secret info."

"There will be another remake of another classic album," he says. "We have no idea what it's going to be. It's intentionally a mystery to the band."

So yeah. Dream on, geek.