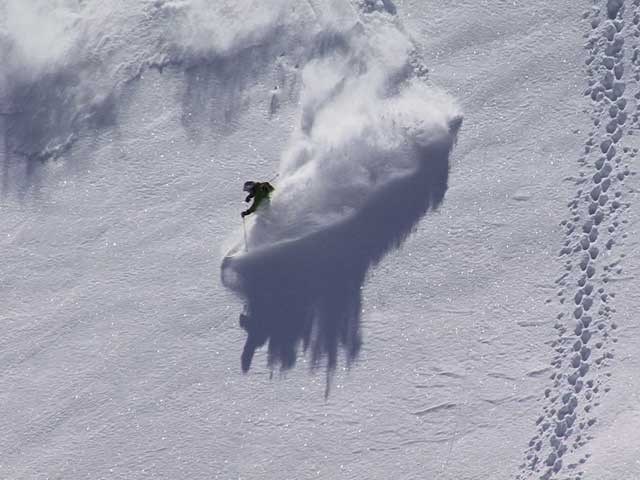 Fresh Tracks A still shot from "Weather We Change", which will be shown at the film fest

All issues environmental are up for discussion at Whistler’s annual Enviro-Fest, but energy is going to be the hot topic on the silver screen.

Marie Fortin is the Enviro-Fest co-ordinator with Hilltrip, a local events and promotions organization that aims to improve sustainability by promoting key issues through events and actions. This is the seventh year for Whistler’s Enviro-Fest, and the second year for the Energy Film Festival.

She calls the film a powerful medium to get a message across.

“It’s a great way to educate, because it’s entertaining and a lot of people really enjoy going to the theatre, so it’s just to broaden the experience of presenting environmental messages,” she said.

The festival features eight films, ranging in length from seven to 98 minutes, and touching on a wide range of energy issues, though they share one common thread: they are meant to inspire and engage the audience.

The films don’t just focus on the science behind energy issues — most also incorporate aspects of adventure and activism to show how global warming and the energy crisis can impact our day-to-day lives.

“So its education, but at the same time, there’s a very nice storyline,” Fortin added.

Oil & Water follows world-class kayaker and environmentalist, Seth Warren, as he travels from Alaska to Tierra Del Fuego on post consumer vegetable oil, while Power Play: The Theft of B.C.’s Rivers , examines the privatization of B.C. rivers and public power. Another, Weather We Change , is a skiing adventure documentary that follows athletes as they search for a greener ski bum lifestyle from the Swiss Alps to the West Coast.

While last year the film festival stretched over two days and featured more films, this year there will be guest speakers from the Community Foundation of Whistler (CFOW) and AWARE, and a panel discussion. The annual Whistler Environmental Business (WEB) awards will also be incorporated into the festival.

The panel forum discussion, which focuses on the topic of Clean Energy for a Change, is designed to create a dialogue between members of the panel and the audience. The forum discussion takes place at 3:30 p.m., and will be facilitated by William Roberts of the Whistler Forum, and features panelists Dan Wilson of the RMOW, Rob Baxter of the Sierra Club, and Chris Joseph of Simon Fraser University.

Organizers also decided to use the film festival to bring a greater level of attention to the presentation of the annual WEB awards, which are awarded by AWARE to small, medium and large businesses.

“It’s a better orchestrated event, I would say,” Fortin explained. “We have more opportunities for dialogue and again, we have a couple of displays where people will be able to learn about different energy alternatives.”

Fortin hopes the film festival will continue to grow each year, while retaining its focus on energy and climate change.

“I can see it becoming much more refined in the future,” she said.

The Energy Film Festival starts at 12:45 p.m., and runs until 10 p.m., broken up by the panel discussion and the WEB awards. But if you aren’t quite prepared to devote an entire day to learning about energy issues, don’t worry — you will be given a stamp that will allow you to come in and out as you please.

For a detailed schedule of films, check www.enviro-fest.ca .