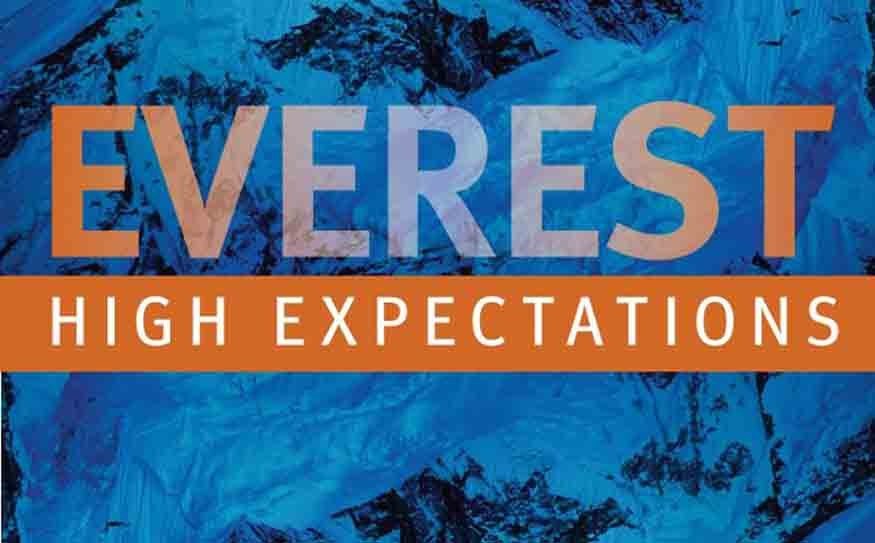 Written by Pat Morrow, who summitted Everest as a member of Canada's 1982 expedition two days after teammate Laurie Skreslet became the first Canadian to reach that pinnacle, and Sharon Wood, who became the first North American woman to reach that same point in 1986 with teammate Dwayne Congdon via a difficult new and never repeated route, the book itself represents several firsts.

In a narrative sense, it's the first publication to tell the story of how the preparation, unfolding tragedies and successes of the 1982 expedition spurred the particular planning, execution and triumph of the 1986 expedition.

But its production as an electronic book designed specifically to take advantage of the iPad's unique technological capabilities sets a new standard for illustrated books by combining the tradition of splendid coffee table books with multi-media innovation.

With 142 full-colour photographs illustrating its 140 pages, the book contains chapters by both authors. Each describes their personal histories and apprenticeships that led to their inclusion on their respective teams in an era when the only people climbing Everest were highly skilled climbers invited by their peers.

Subsequent chapters detail their respective climbs, and the book concludes with afterwards by each of them, in which Wood and Morrow share insightful comments on the mostly lamentable state of Everest as overcrowded and disrespected, with Morrow writing, "Adventure tourism has turned one of the world's great mountains into a crowded playground. Admission is costly, and sometimes fatal."

Both Morrow and Wood's writing styles are engaging and captivating as they describe the adventures and experiences that defined and celebrated that particular chapter of each of their life stories.

At the same time, the book's equal triumph is in its multi-media 3D presentation facilitated by the iPad's technology.

A flick of the finger on any photo expands the image to fill the screen. Numerous photos have two, three or as many as 10-full colour and sharply textured images accessed as interactive slide shows, each bearing captions that share additional details about the climbs' events, personalities and state of the mountain.

Not stopping at still photos, the hybrid book also incorporates video and audio footage from both the '82 and '86 expeditions, which literally bring the story to life — including breathless commentary by Skreslet as he films an avalanche thundering down a not-very-distant slope, adding an extra dimension of drama and depth to the story.

You can feel the cold in Skreslet's voice.

The book also includes links to external resources including a one-hour documentary, as well as electronic footnotes providing valuable information about key people and story elements that can be accessed later without interrupting the text.

Beyond the high-tech bells and whistles though, Everest: High Expectations masterfully shares a story from a perspective that's never before been recorded — how the circumstances of the 1982 expedition, during which a large team intent on making a uniquely Canadian stamp on Everest by climbing a new, technically challenging route, fractured after the tragic deaths of three Sherpas and a cameraman. The team regrouped and ultimately succeeded in its goal of placing the first Canadian on the summit — which inspired and guided the planning and execution of the self-sufficient, smaller Everest Light 1986 expedition.

To produce the publication to coincide with the 30th anniversary of the '82 climb, Morrow teamed up with publisher Frank Edwards, with whom he first worked in 1975 when Edwards was editor of Canadian Geographic magazine.

For her part, Wood said she valued the opportunity to write about the '86 expedition from her perspective as one member of the team and to express how the '82 expedition influenced and inspired her.

"I really enjoyed writing about how I was very moved to witness my peers facing such hardship and rising to it, and also by how different individuals rose to those challenges in very different ways," Wood said. "The '82 trip was very much an inspiration for me, and I wanted a chance to rise to a challenge the way they did."

With both the '82 and '86 climbs being ground-breaking Canadian mountaineering accomplishments, it's only fitting that the book that links their connection should be too.

More than just a book, Everest: High Expectations is a well-written, introspective and thoughtful story artfully told in a 3D multi-media experience. As such, Morrow said he feels confident that while many fans of mountain literature may not own or use iPads, with 600 million current iPad users projected to rise to 100 million, he expected the book's captivating stories of adventure combined with its high production values have the potential to reach a large audience, including those who might discover mountaineering as literary genre. At the same time, he added, the book could potentially be made suitable for other electronic readers.

"Mountaineering is a natural fit for electronic books, so many expeditions have video and audio components," Morrow said. "Keep in mind; this is only version two of this software. We're just at the dawn of iBook publishing. The iPad itself is underutilized. Our book stands a chance of opening eyes to what's possible."

Everest: High Expectations is downloadable on the iPad by searching for the title, authors' names or at the iTunes book store for $9.99.