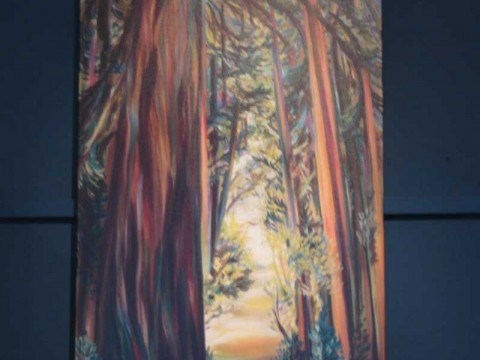 At first glance to a passerby, Expressions Art Studio may appear to be just another "paint your own ceramics" shop, a place to come with the kids and create a coffee mug or a dish. And while it is that, there are also many other artistic layers to peel back on this local business.

Ivana Ilic Stewart has owned the studio for almost nine years, though the studio first opened in 1996.

"The concept is everything is handmade in British Columbia," Stewart explained. "Originally, it was just a family activity centre."

Today, she has grown the business to encompass many different purposes: while Expressions is still a working studio, where people are welcome to come in and flex their creative muscles and create food safe souvenirs, jewelry, paintings, visual travel diaries, paint ceramics, fuse glass, sculpt clay and paint with acrylic and watercolour, the studio also features the work of accomplished, skilled artisans from across the province. Fused glass by Jeremy Morris, wood pieces by Bruce Campbell and Peter Kiss, pottery and jewelry by Whistler artist Borgi Rayen, more pottery from Sea to Sky artists Vincent Massey and Laurie McCallum and hand-felted, hand-painted scarves and hats by Alice Philips are featured in the souvenir gallery on one side of the studio. And that's just scratching the surface.

"Its been evolving slowly," Stewart said. "Now, it's looking better than ever and it's exciting to have all of these artists here, displayed."

They also host parties for families, children and corporations, and over the years, they've developed a loyal clientele of locals and visitors.

"It's the only place in Whistler where you can have three generations having fun all day!" Stewart laughed.

Cary Campbell Lopes also teaches her popular painting workshops at Expressions, and is due to start another adult watercolour class on Saturday, March 20.

"It has evolved over the years. We've tried to include local artists and when they sell their work, we ask that they teach, too, so it's worked out really great for us, too."

Stewart has recently converted one corner of the studio into a dedicated space to exhibit work by Linda Dayan Frimer, a Canadian artist who is well known for West Coast wilderness-themed paintings, and her cultural and environmental concerns. Frimer has completed special commission projects for groups like the Red Cross, Canadian Breast Cancer Foundation, Trans Canada Train Foundation, Western Canada Wilderness Committee and the Raincoast Conservation Society. Her bright, vibrant paintings and murals adorn the walls of hospitals, cultural centres and homes around the world.

"It's definitely added way more style and colour (to Expressions) and it's a great experience for people that are familiar with Linda's work from Vancouver to have her at their fingertips in Whistler," Stewart said.

Frimer actually walked into Expressions one day and introduced herself to Stewart. The two reached an agreement that will see Frimer's work alone occupying the new gallery corner of Expressions on a long-term basis.

Frimer recently completed a special painting entitled Whistler Passage: Where Legends Begin, which is also featured at Expressions. She will be donating a portion of proceeds from the sales of Whistler Passage posters to Whistler Community Services Society.

"We find that we really enjoy having all of this artwork here and it's inspirational for the customers who have been coming here over the years," Stewart said.

They'll be hosting an opening party with Frimer in attendance on Saturday, March 13 at 4 p.m.