Voleurz combines passion for life, on and off the hill, in Whistler
May 2, 2008 2:48 AM By: Holly Fraughton 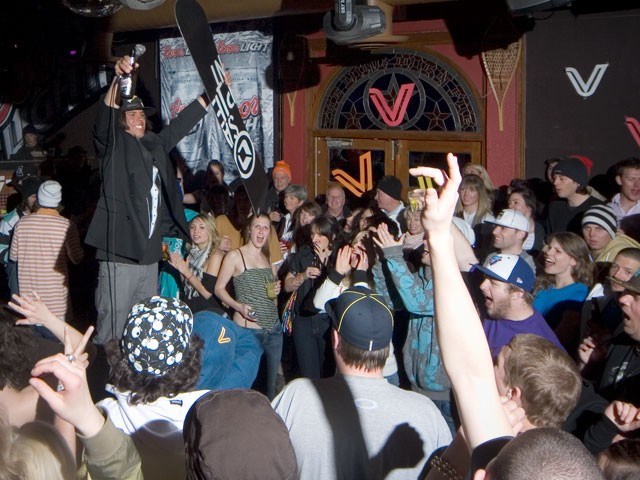 Odds are, if you’ve been in Whistler this season, you’ve spotted people rocking toques emblazoned with giant Vs. Well, that V stands for Voleurz, an up-and-coming young brand that’s poised to make a big splash in the ski, snowboard and skate industry.

Mason Mashon is just one of the many minds behind the madness at Voleurz.

He first teamed up with the founding members, Darren Rayner and Bruce Giovando, about eight months after they developed the brand way back in 2003.

Now, there are about 18 members of the Voleurz “family,” a group of energetic, talented snowboarders, skiers, and skateboarders who are extremely handy with camera equipment. They capture their antics on the slopes and streets, producing short and full-length films for the masses.

And style is crucial to the Voleurz family — it’s so important, in fact, that they make their own clothing.

“A lot of the companies now are more focused on their market segments, like it’s just skiing, it’s just snowboarding, it’s just mountain biking, it’s just skateboarding,” said Mashon. “Our brand is catering to the lifestyle. It’s the Whistler lifestyle, right? You have four seasons here and you can’t do everything all year.”

While their promotional gear, like hoodies and toques, has been around for a few years, they’re just launching their first full clothing line late this summer.

The fashion side of their operations really took off after they met their clothing manager, Harvey Li, about two summers ago. Li was able to hook them up with a new supply chain overseas.

“We were ordering stuff in Canada and just trying to order products that we could try and customize and we were having problems with fitting and prices,” Mashon explained. “…We decided that we should take this opportunity to develop our own line.”

Since Li is based out of Squamish, it seemed like a logical decision to base their operation in the Sea to Sky region, so they recently migrated from Victoria, where they first started out, to set up shop in Whistler, full-time, so they can ride, shoot and live.

The clothing design is mainly done by Giovando and Li, but they also get the rest of the family in on the process.

“It’s nice because of the family aspect, you know?” said Shayne Zwickel, a rider for Voleurz. “Nothing really gets done without everybody’s input.”

Mashon recently went down to Squamish with a rider to work on some new designs.

“We were just talking about this rain jacket that we want to make, and everyone just kind of throws ideas out there… we’re all having an open discussion on how we’re going to design this product,” Mashon explained.

Now, they’re busy trying to get established and create a name for themselves, and with a strong roster of riders and skiers backing them up, that shouldn’t be too hard.

“Trying to sell this first line, there is a little bit of apprehension because we’re not well known. People don’t really know us — therefore it’s higher risk for someone to invest money into our clothing line, so they’ve been kind of wary,” said Mashon.

The debuted their new line during the Telus World Ski and Snowboard Festival, teaming up with Liberty Skis, Coors Light, Newschoolers.com, Snowboard.com, Sapient, Whistler-Blackcomb and Ripcurl on the “No Big Deal” fashion show at the Longhorn Saloon.

Almost 250 people turned up to see the riders’ “innovative” take on catwalk style — TJ Schiller poured beer over one of the models, Peter Olenick stripped down to his Speedo, and Josh Bibby had his mustache shaved off on stage.

A quick visit to their website — www.voleurz.com — reveals a few of the family’s latest antics, including a mid-April powder day in Vernon, and a full 24-hour session of snowboarding, as chronicled on the Voleurz blog.

They also just completed a six-week cross-Canada tour for one of their recent films, More For the Astronauts, which was sponsored by Coors Light.

This RV adventure yielded lots of tape, though Mashon admits he’s been a little reluctant to watch it.

“I’d like to see it for analytical purposes, just to work on my speeches better, but there’s definitely footage on there that I don’t want to see,” he said, exchanging a grin with Zwickel.

With such a strong focus on the clothing line right now, one would think that they would back off a bit on the film side of things. But that isn’t the case for these avid riders and skiers; they’re currently in the process of shooting their fourth film, Outdoor Education, a high-definition full-length film that showcases skiers, snowboarders and skateboarders, plus some random antics from the Voleurz family thrown in to keep things interesting.

Whether they’re behind the camera or sitting down at the drawing table, Mashon said the Voleurz family is all about bridging the gaps between the worlds of snowboarding, skiing and skateboarding.

“We feel that everyone is here for pretty much the same reason, why not make it more of a community, you know, and bring people together?”