Fashion fused with food and fun 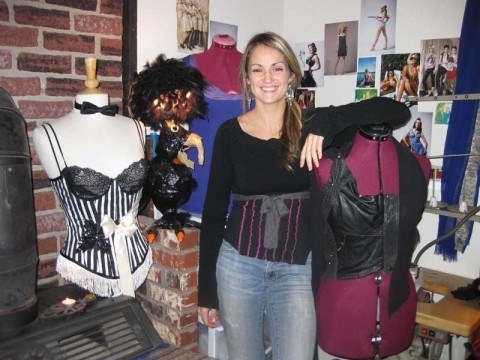 Textiles are often forgotten in the artistic world, but two local fashion designers have been toiling away behind the scenes, creating pieces of wearable art for Sea to Sky residents and visitors.

Both graduates of the fashion program at George Brown College, sisters Angela and Lara Cooney decided to team up and start their own line, Clothes Minded Apparel and Design, a few years ago. Based out of their home studio in Squamish, they produce functional, fashionable pieces for real people, and are as environmentally friendly as possible in the process, using recycled fabrics and materials in all of their items.

Anyone from the Whistler area would recognize their signature funky legwarmers made from old sweaters. But many people have no concept of the amount of time and energy that goes into a project that is as seemingly simple as legwarmers.

"It's a little bit frustrating because I know that its recycled sweaters, cut up and then sewn back together - I'm not hiding that - and it's frustrating when you get women who have figured it out: 'oh, don't buy those, Marge! They're $45 - I'll make those for ya!'" Lara sighed.

For the past two summers, they've hosted the Legs, Leather and Lace fashion show at the FireRock Lounge.

This time around, with all the excitement and extravagance that comes along with the Cornucopia crowd, they're taking things to another level, hosting a special Asian-inspired show at a transformed Longhorn Saloon. The sisters will be showcasing their evening wear and lingerie alongside the designs of Vancouver's Shea O'Connor. Attendees will also sip and sample Asian-inspired cocktails and canapés, of course, while a DJ will provide the tunes to get the models sashaying and swaying down the runway.

The party promises to be one of the most exciting new events on a roster chock full of parties for Cornucopia 2009, one that will cater to a young, hip and local crowd, specifically.

"There's going to be a little bit of an Asian flair to things," Lara hinted.

Lilli Clark is events producer for Watermark Communications, the local company that took over the reigns of Cornucopia last year. She explained that the Chopstix, Turntables 'n' Lace show will fill a void in the programming, offering up a much more affordable alternative to some of the spectacular and opulent parties that can cost upwards of $150 a ticket.

"I think it's a great addition to Cornucopia because it's going to be a fantastic party - they're going to totally transform the Longhorn, it will not be the Longhorn that you know. And it's at a really great, reasonable price for those who maybe can't afford Oceans + Bubbles."

The event should also prove to be a great opportunity for these designers to step into the spotlight and showcase their collection to a crowd from outside of Sea to Sky.

"We're basically now just looking for retail stores to carry our stuff," Lara said, adding that their designs are currently for sale at Transition Space gallery. They will again have a table at Bizarre Bazaar later this month.

Over the past two years, they've been focusing on expanding their line.

"We've built our base of supply a lot more," Lara said, explaining that with more variety in like fabrics, they have more creative freedom and are able to create more than just one of some items.

"We're starting to focus in on certain areas of design," she added.

Getting Clothes Minded off the ground and trying to grow it into a larger entity has been a learning experience for the sisters, who have managed to start selling their designs online through Etsy.com.

She pointed out that amassing their material and equipment is an expensive endeavour.

"You're constantly investing in yourself to be creative.

"We're trying to make it that more than one piece will come out," she said. "So for example, we've got these recycled denim jackets, so they're old denim jeans made into these kimono-style jackets."

Lara made one of the jackets for a friend, and soon received more requests for the same piece. Now, she's trying to make variations of the original style while still ensuring each item is unique.

Their creations are carried at a few shops outside of the Sea to Sky region, in Vancouver, Nelson and as far away as Seattle. But they're finding it hard to grow in an ethical manner working within existing industry standards.

"I'm starting to try to figure out how to branch out and become a larger company and maintain sort of the environmental awareness, and it's really hard," she said.

While they're still producing a lot of intricate leather pieces and accessories, and the popular legwarmers and lingerie, they're now creating more one-of-a-kind evening wear pieces.

"We've been doing a lot of evening wear," she said, gesturing to a leather piece in progress on a nearby dress form.

At the upcoming Cornucopia show, they plan to showcase some of these newer, sexy, backless designs coupled with some more risqué lingerie items paired with reconstructed rock T's.

"It'll get a little saucier as it goes," Lara said with a smile.

They've been working steadily for the past three weeks on designs for the show, and will be sewing up until the last minute.

"I work well under pressure," she laughed.