Feeling the spirit of the drums 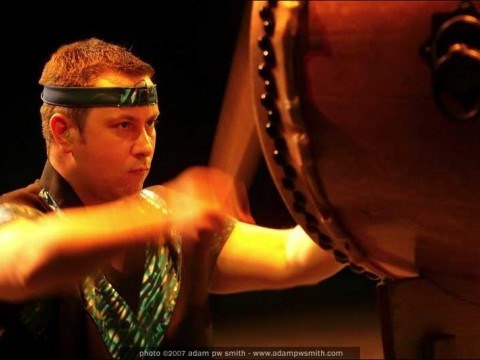 There's just something about the Japanese taiko - the "big drums" - that conjures up emotion with a single strike. The pulse of the player's blood and their heartbeat travels from the bachi (taiko sticks) into the centre of the skin and then down along the body of the drum to the floor, sending vibrations through the soles of your feet.

Bonnie Soon knows that feeling all too well. She is the artistic director for Uzume Taiko, Canada's premier professional taiko drumming group. Based in Vancouver, the troupe has been performing for audiences around the world since 1988, fusing their unconventional brand of taiko drumming with different styles of Western music and performance.

Starting out as a professional modern dancer, Soon's artistic interests transitioned to taiko drumming in her early 20s after she saw a performance at the Museum of Anthropology.

"The hardest part of drumming for me wasn't the physicalness, it was martial arts and vocal shouts - it was making a sound with my voice."

At first, Soon assumed all of the Asian taiko performers were Japanese, but when she discovered that they were actually of different backgrounds, races and cultures, she was inspired to take up the art form.

"I knew that if people saw me play, they would assume I was Japanese and I think that was right at the time when cultural appropriation was quite a debate as a topic - I'm speaking mainly First Nations - but I still was very sensitive that I didn't want to seem like a fake," she said with a laugh.

But Uzume Taiko wasn't setting out to sell themselves as a traditional taiko group.

"We're a Canadian taiko group and we're not traditional Japanese drummers, so that's very important to us because we're funded by the Canadian government. We are first and foremost Canadian and that's what's special about Uzume Taiko, I think. We can't help it - we play from where we are."

This cross-cultural attitude comes through in their performances, which often see the group collaborating with a variety of musicians.

"It's been our focus to play with other people who are in Vancouver and whose music we enjoy and that can range from Western to different cultural traditions."

"Growing up in Vancouver ... in the '60s,'70s, all through school I didn't really appreciate being Chinese Canadian and this was an opportunity to get involved in an art form that was closer to my Asian heritage."

She admired and respected the strong Asian women who took centre stage in the performances.

"They were really strong and traditionally, I think I was raised to be quiet and really respectful to my elders, which is all really great, but I actually couldn't speak until I was an adult."

While both dance and drumming require a strong connection to rhythm and the desire to engage and entertain an audience, the similarities between the two mediums basically end there.

Uzume Taiko's group drumming approach isn't true to a long Japanese tradition, though they take their essence from the festival drumming style.

"That means that instead of the drum being used to help village life or spiritual practice or to support classical theatre, it became its own art form or style," Soon said.

Their name, Uzume Taiko, comes from taiko, the Japanese word for "big drum," and from the goddess of laughter, Ame No Uzume No Mikoto, the Heavenly Alarming Female who, according to legend, started the art of taiko drumming.

Aside from the obviously powerful music of the taiko drum, the troupe's performances also include humour and dramatic choreography and staging for a well-rounded audience experience that communicates emotions, power, energy and spirit on stage, creating a live performance event that will move people.

Today, Soon performs with three other members of the troupe: Eien Hunter-Ishikawa, a drummer, percussionist, and taiko player who has lived in Japan, Michigan, and Hawaii; Jason Overy, who has studied with some of North America's taiko and percussion masters; and Naomi Kajiwara, who became enthralled with Taiko drumming after her first workshop with Uzume Taiko back in 2001.

The group has brought their unique brand of taiko drumming to stages across North America and further abroad, sharing their collective wealth of over 40 years of experience with audience members and classes.

Learning the craft was a slow process, one that involved more than physical and musical discipline.

"It really is a spiritual connection, as well, and hopefully you have to engage your soul and spirit to play when it's deep," Soon said.

"If you get the spirit involved and people actually feel how committed you are, it's like singing a song without words."

Like an army, sometimes they play in sync and in unison, conjuring up strength and power. But other times, they break off into solitary parts, enjoying some lightness.

They've collaborated with the likes of Paul Bray, Mearingstone, the Victoria Symphony Orchestra, Ben Rogalsky and Dave Corman. This time around, they're touring with musician Alcvin Ryuzen Ramos, pairing the taiko drums with the sounds of shakuhachi and shinobue flutes in a performance titled Taiko and Take.

"The sound of the flute, the bamboo, it's a great contrast to the heavy drums, so he adds a lot to the show," Soon said.