Collector Jacques Barbeau wants gallery to have 'pick of the litter' of his art treasures
Oct 8, 2014 6:00 PM By: Cathryn Atkinson 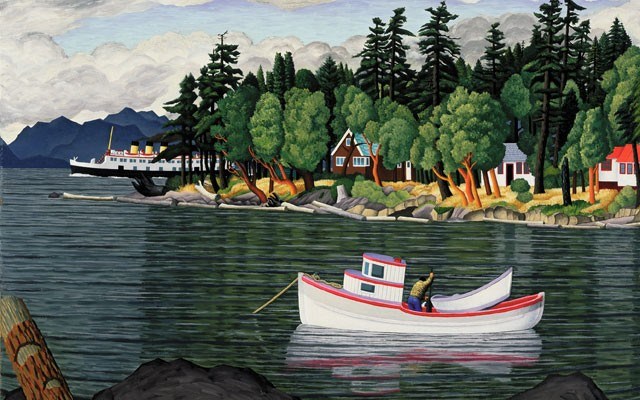 Generous donation Taylor Bay, Gabriola Island (1952) is one of 15 works being donated to the Audain Museum by collector Jacques Barbeau. image submitted

Whistler's Audain Art Museum (AAM) is to house the finest collection in Canada of works by late B.C. landscape artist E.J. Hughes, thanks to a major donation from a collector who bought his first painting by the artist over 50 years ago.

Retired lawyer Jacques Barbeau made the announcement at a press conference and tour of his Vancouver home on Monday, Oct. 6.

In all, 15 Hughes watercolours, acrylics and oils owned by Barbeau, plus an additional four Hughes paintings from museum founder Michael Audain's collection, will be given their own room, to be named the Barbeau-Owen Gallery.

Born in North Vancouver in 1913 and passing away in 2007, Hughes painted well into his 90s. Most of the donated works are landscapes from Vancouver Island or the Gulf Islands. One is a portrait of his mother, painted in 1939. Hughes captured a changing British Columbia over seven decades.

Now in his 80s, Barbeau and his wife Marguerite Owen amassed 80 Hughes paintings and drawings and were looking for a B.C. gallery to display part of the collection. When they learned of Audain's ambitions for an art museum at the resort, Barbeau fired off a two-line email to him.

It read: "If you have room, you can have the pick of the litter."

Currently under construction in Whistler Village, the art museum is due to open in the fall of 2015.

Audain and his wife, Yoshiko Karasawa, are the principal donors of artwork to it.

Suzanne Greening, the executive director of the AAM, along with Ian Thom, a senior curator at the Vancouver Art Gallery who chose the 15 paintings for the donation, joined Barbeau for the announcement.

In an interview with Pique, Barbeau said collecting was his passion.

"I don't do golf, I don't do sports. I do this," he said, gesturing to the dozens of paintings on the walls of his Shaughnessy home.

"Over the course of the last 25 years of his life, E.J. Hughes and I got to know each other and we'd meet regularly. He would say, 'My art is my bequest to the people of British Columbia.' If he said it once, he said it 20 times," Barbeau said.

"His real aim was for people to see (the work). In a typical museum today, they're loaded and great works are hidden in the basement. Somebody told me to look at the website for the Audain Museum. And I saw the conceptual gallery, and said 'This is manna from the heavens.' This is perfect for Hughes.

"I contacted Michael and we took it from there. We decided to merge our works into a permanent collection. It allows me and my wife to meet our commitment to E.J. Hughes."

Barbeau said they had donated individual paintings in the past, but this was their largest single donation to date.

Asked what spurred his ongoing obsession with Hughes' paintings, Barbeau said that the works "provide serenity" in his life. He first spotted a painting by Hughes on the cover of a B.C. telephone directory in the 1950s, and found himself looking at a real Hughes in a gallery in 1959.

He purchased the painting for $400, which he paid off over three months.

"When I first started collecting it, it was the colour, the tonality. It was very attractive and powerful, sensual. The context of each scene was captivating," he said. "It just seized me. Don't ask me why, I had no formal training... E.J. Hughes, to me, anchored the heart and soul of British Columbia."

Over the years he would purchase Hughes' work wherever he could find it, whether directly from the artist or at a New York auction.

Owen supported her husband, coming to love Hughes' work as much as he did.

"It was a partnership, no doubt. We've been married 56 years," Barbeau said.

The couple had a home in Whistler when their four children were younger.

"There was only one grocery store. It was really rustic," he said. "I haven't been to Whistler for a long while, but now we're gonna start going!"

He had high praise for Whistler council's efforts to bring the art museum to the resort.

"The mayor of Whistler and the council, they conceived this deal and they got Audain to do it. To me, this will be the Stanley Park of Whistler. I have no doubt. People tell me I'm exaggerating as usual, but when I saw the museum... it's by the creek, the trees. It's going to be world class," Barbeau said.

With this announcement, the AAM now has 182 objects due to go on display, creating a chronological history of British Columbian art, said Greening.

The earliest piece is a Nuu-chah-nulth First Nations mask carved prior to 1800 and the most recent object was made in 2013, she added.

It was recently announced that Michael Audain had purchased Crazy Stair by B.C. icon Emily Carr for $3.393 million in 2013. This, too, will be housed in Whistler, along with more than 20 other paintings by Carr.

And while the AAM will be a collecting museum, Greening said there is no budget as yet for purchases. She is hopeful that other donors will step forward, encouraged by Barbeau's announcement.

"I'm a huge fan of E.J. Hughes. I come from Ontario and his work so represents the B.C. coastline for me. When I moved out here 12 years ago, I totally embraced the mountains and water. E.J. Hughes has done such a great job in capturing B.C.," Greening said.

"We are thrilled by the donation. To have the generosity of another couple, Jacques and Marguerite, who got excited by the art museum... It's about sharing a vision."