Canada's First Nations made quite the impression at the Olympic opening ceremonies last week as they shared their song, dance and traditional regalia with the world. That won't be the last you see of First Nations, including Métis and Inuit.
Feb 19, 2010 2:18 AM By: Holly Fraughton 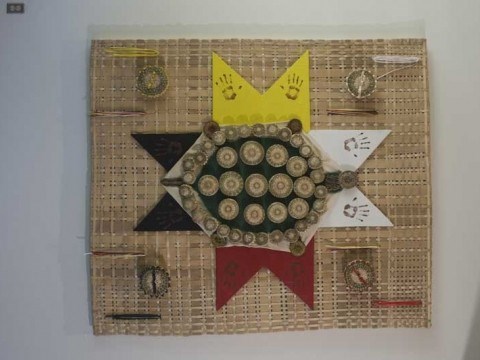 Canada's First Nations made quite the impression at the Olympic opening ceremonies last week as they shared their song, dance and traditional regalia with the world. That won't be the last you see of First Nations, including Métis and Inuit. They have a huge artistic presence at the 2010 Games.

Anyone who has visited Whistler's venues has probably already noticed the welcome works created by the Four Host First Nations as part of VANOC's $2 million Aboriginal Art Program.

Connie Watts, mixed media artist and a business owner of Nuu-chah-nulth, Gitxsan and Kwakwaka'wakw ancestry, is program manager of the Aboriginal Art Program. The program has produced the Four Host First Nations welcome pieces that are located at each official venue in Vancouver, Richmond and Whistler.

The program is intended to showcase the talents of First Nations artists from across the country, as well as the unity and diversity of Canada.

"We did reach every province and territory," Watts said. "To be inclusive, we included textile works, which are often coming from the women's knowledge, youth mentorship projects and variations from traditional to contemporary."

At Whistler Olympic Park, for example, there is a large wall piece woven of black ash and sweetgrass that came all the way from Prince Edward Island.

"Their whole community got involved in the creation of it, so it's a spectacular story," Watts said.

A stroll through the Whistler Sliding Centre, Whistler Olympic Park, Creekside, Whistler Village, Roundhouse on Whistler Mountain or the athletes' village shows that Canada's First Nations people have, indeed, been busy preparing for the Games.

An accomplished artist in her own right, Watts is very pleased with the calibre and quality of the pieces that have been created for the Games, including 16 new pieces in Whistler.

"I think it's incredible and it's very exciting to know that as a nation across Canada, we have such talent, and growing talent," Watts said. "These are a lot of newer artists, established artists and up-and-coming artists, so it's been incredible to see the professionalism and the desire to really show their best to the world."

At the athletes' village, there are five installations including Running With Spirit, a red cedar carving by Johnnie Abraham and Jonathon Joe of the Lil'wat Nation, a Caribou hair-and-leather creation called Strength Through Fun from the Northwest Territories and an aluminum and enamel sculpture from Rosalie Dipcsu of Lil'wat Nation.

The pieces will remain in place permanently and, Watts feels, so will the stories that go along with each. Those stories are preserved in a new book, O Siyam, that features more than 45 pieces of Aboriginal-inspired artwork created specifically for the Olympics.

"I think it's going to leave a large legacy," Watts said. "I think the stories will continue on well after the Games because of the diversity and the complexity of the program. It's so far-reaching and it helps that there's one book that captures it all, because there are 15 venues from Richmond to Whistler and there are pieces including Four Host welcome works that are involved in every single venue. And then you diversify that out into Métis and First Nations across Canada and you can see the complexity growing!"

Though we're in the midst of the Olympics and most of the pieces are in place, the Aboriginal art projects aren't entirely finished yet. Rather, a youth mentorship program is still running in Richmond. And Ray Natraoro of the Squamish Nation will be carving a piece at Whistler Olympic Park during the Olympic and Paralympic Games, allowing spectators to watch this fascinating tradition come alive before their eyes.

"These are permanent works that are put into the venues, but we felt we'd take advantage of the audience and show some of the work actually being developed," Watts explained.

For Watts, the program has been an unquestionable success and a true legacy for First Nations artists. Many of those artists live here in the Sea to Sky region.

"For me, it was outreach to public programming and increasing the understanding of what First Nations have the capacity of now fulfilling and working in. So as we know with public programming, it's often complex, the process is often form-heavy... I think this allowed capacity-building within the communities, to understand what that process actually is.

Now, entering the final stretch of the program, Watts' sense of respect for the artists who contributed to the Games is unmistakable.

"Our artists are really incredible and I'm so proud of them," she said. "I couldn't be more proud and, I have no children, but I'm sure this is the pride that parents feel when they see success. And I feel that they had such great success."