For the love of classical 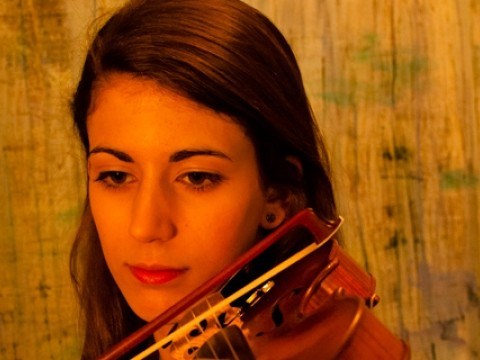 Pop music gets all the glory. When Whistlerites like Ali Milner or Rachel Thom - bless their souls - have a concert or win a competition, everyone hears about it.

But there are vast numbers of talented young people born in these mountains that may never get the same recognition because they play a less popular instrument.

Well stand up and recognize Maddie Reid, a virtuoso on the violin specializing in classical. On Saturday, June 18, Reid will give her first solo recital in her hometown.

"When I was younger, I used to play the choir concert or whatever, but nothing like this," Reid says from her parent's house in Alpine, where she's staying for the summer before heading back to Vancouver Island to resume studies at the School of Music at the University of Victoria.

Accompanist Karl Hirzer, a fellow student who plays guitar in a heavy metal band and will head off to Salzburg on a music scholarship, will join her on stage. The two played a similar show in Hirzer's hometown of New Westminster the week before.

"It's just a good thing to do in third year, to have a solo recital," she says.

Together they will play a Mozart concerto, a Brahms piano sonata, Bach - you know, the classics. These are difficult pieces to master but ones that even non-fans of classical music will be able to appreciate for the proficiency alone that it takes to play these pieces.

It's taken Reid relentless practice, three or four hours every day on top of gruelling 13-hour school days to get to the point where she can stand up before an audience of people she has known all her life and let that violin sing.

As a child, she attended Myrtle Philip Community School and later Whistler Secondary. Growing up, she was always drawn to the sound of the violin, the way it wept, the emotional range and the flurry of sounds that could be teased out of an instrument so small. She quickly excelled, playing as part of the Vancouver Youth Symphony Orchestra for two years, and then playing in the Summer Pops Youth Orchestra. Last summer she played in the Symphony Orchestra Academy of the Pacific in Powell River, which draws young musicians from around the world.

So, the girl can play. And she will play for you, Whistler, if you will listen. She's a Whistler girl at heart, she says, and if it were possible, would move back once she finished her music education at the University of Victoria.

"I don't know if there's a lot of opportunities for me here so I may have to stay in a city, but it would be nice," she says. "We'll see."

Instead, she'll try to settle for somewhere in Europe. Good enough, we suppose.

"There's a lot going on there for music and funding and what not. It's a good place to be," she says.