Former Whistler athlete featured in Beyond the Break 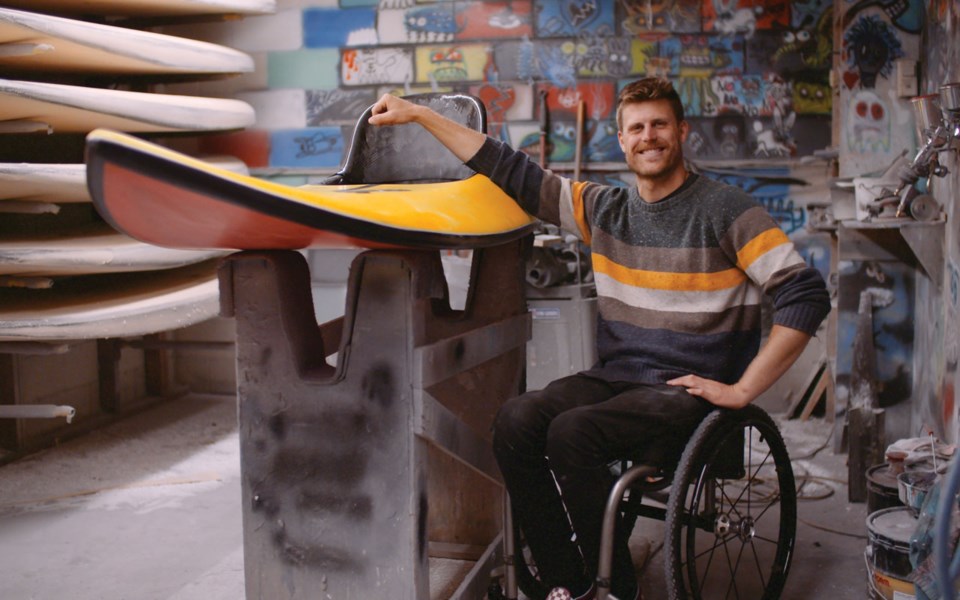 Sam Danniels and his handmade waveski are featured in Beyond the Break. Troy Baird

When filmmaker Missy McIntosh set out to make a documentary about a guy in North Vancouver creating adaptive surfboards—called waveskis—she thought it might lead to a five-minute short.

“I think it was just the idea,” she says. “His personal story is amazing, but the adaptive gear angle really hooked me… Here was this guy who has this amazing story, but I loved his ingenuity and engineering ability. He kind of had to take it on right after his injury—even with skiing, none of the skis really fit him. He had to basically start there.”

The result was Beyond the Break: The Sam Danniels Story, a 46-minute film marking its debut at the Vancouver International Mountain Film Festival.

“If she had approached me and said, ‘We’d like to make a 50-minute video about you’ I would’ve laughed and said, ‘I’m not that interesting,’” Danniels says. “But it evolved into that.”

Danniels—who called Whistler home for a decade—might be modest, but the film demonstrates he is in fact interesting enough to fill 46 minutes. Whistlerites in particular will be able to relate to his background as a fearless outdoor athlete.

When a horrific mountain-bike accident in 2005, at the age of 19, injured his spinal cord and left him paralyzed from the chest down, that didn’t change.

Instead, he customized a sit-ski and wound up competing around the world; built an adaptive bike, more for fitness than enjoyment, he points out in the film; and, later, came to the sport of waveski surfing, building several of his own boards.

“That was really inspiring to me—just the fact that this guy who had so many obstacles put in front of him was engineering ways around him to do the sports he loved,” McIntosh says.

The documentary follows Danniels as he creates his latest board—from the start with shaping it to have it glassed to actually hitting the waves in Tofino. It’s interspersed with Danniels’ story and insight into how far effort, passion, and determination can take you.

Because he doesn’t have control of his lower back, or hip muscles, for example, instead of rolling his waveski like a kayak when it overturns, every time he falls, Danniels has to unstrap, right the board, get on top of it, and strap back in.

“It’s a lot of energy, for sure,” he says. “[But it’s a] big part of the skill of being able to go out and do it safely and successfully.”

While shaping the board only took three days, along with a few days to glass it, the production of the film took much longer.

“We had quite the delay,” McIntosh says. “But COVID didn’t stop us completely because we’re a documentary crew and quite small. In most cases, it was me, and a cameraperson who was also doing sound. It was a crew of two people. We were able to resume some filming in the summer.”

Also adding to the delays: Danniels was on his sit-ski on Whistler Mountain last winter when his binding failed, he fell, and sustained a concussion.

But when the film crew, Danniels, and his partner Megan, who’s also featured in the film, were finally able to make the trip to Tofino to try out the new waveski for the first time, it all came together.

“It was a really awesome thing for me because we had been talking about surfing the whole time,” McIntosh says. “But there’s also nerves. I had never seen him surf before. I didn’t know how confident and capable he was … He’s determined. He doesn’t want anyone feeling sorry for him. He’s out there just doing it. It was so cool to see him get in the water and then when he caught the first wave I almost cried.”

Catch Beyond the Break, streaming as part of the Vancouver International Mountain Film Festival until Feb. 28 at vimff.org.

Here are all the winners from the Whistler Film Festival's virtual awards ceremony
Dec 22, 2020 9:09 PM
Comments