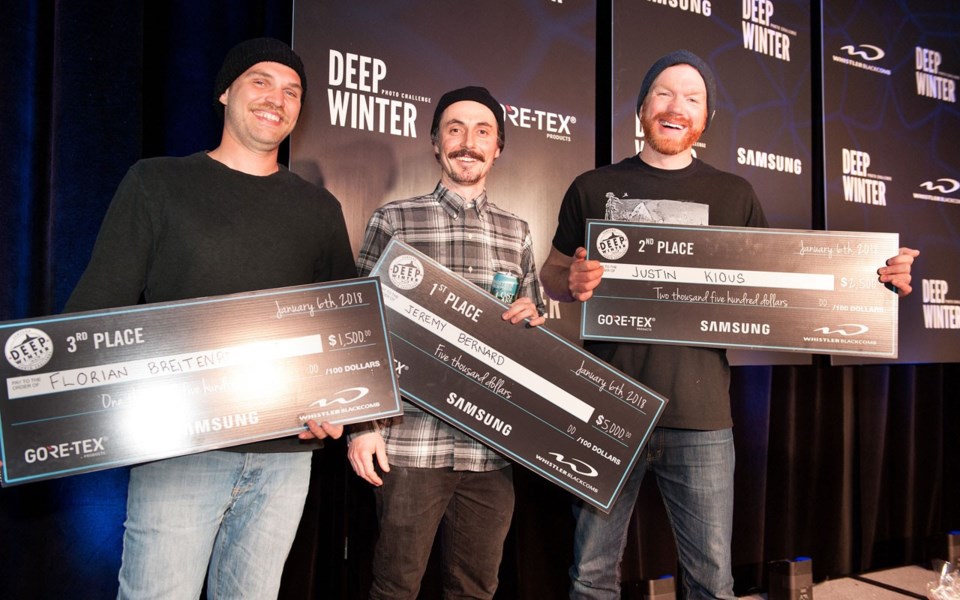 It was the year of the outsider at the 2018 Deep Winter Photo Challenge.

France's Jeremy Bernard was crowned the winner at the annual photography showcase on Saturday, Jan. 6.

"Seventy-two hours to shoot and put a slideshow together is pretty short. But getting organized and knowing exactly what I needed helped me to shoot all I needed," says Bernard over email from Tokyo following the win. "It's just a huge amount of work to accomplish in a short time."

Deep Winter invites six of the world's top snow-sport photographers to compile a slideshow of awe-inspiring images shot within Whistler Blackcomb's boundaries over only three days. The annual race against the clock, which has become one of the premier events on the snow-sport photo circuit, tends to favour those competitors with a finely honed concept and a precise plan of attack.

Bernard, whose slideshow paralleled the "Whistler dream" with a precocious child gazing into a snow globe, ticked both those boxes.

"So many people dream about coming to Whistler one day. This is just a story about three friends skiing in Whistler and looking at it through their own eyes," he explains. "The kid is dreaming about skiing through his snow globe, and we are skiing in Whistler through our crystal ball."

Hailing from the French Alps, Bernard says that his unfamiliarity with the terrain offered some challenges over the 72 hours, but his outsider's perspective also helped his imagination flourish.

"Going in blind pushed my creativity and forced me to work with all the little features we found," he says.

The European isn't a complete stranger to Whistler, however, having lived here for a season some 10 years ago.

"I was at the beginning of my photo career; this is where I shot my first photos. I ran into (three-time Deep Winter winner) Jordan Manley when he was competing in Deep Winter, I went at the show and saw all the slideshows," recalls Bernard. "That night, Jordan's work really inspired me and all I wanted to be was as good as Jordan one day. So entering the competition 10 years after was like an accomplishment for me. I feel like I closed a chapter of my photographer's career."

Rounding out the top three were two other photographers from outside the region: Bellingham, Wash.'s Justin Kious, and third-place finisher Florian Breitenberger, who hails from Germany.

"That outside perspective potentially helped me," says Kious. "I didn't have any bias against going to certain spots because I didn't know certain spots."

The theme for Kious' show was "Seek and Enjoy," about the journey skiers and boarders embark on to find the perfect patch of ridable terrain.

Bernard takes home $5,000 and the honour of being crowned the 2018 King of Storms. To see more of his work, visit jeremy-bernard.com.