Get knotty with macramé

Former Sea to Sky resident returns to Whistler to lead workshop
May 23, 2018 6:00 PM By: Alyssa Noel 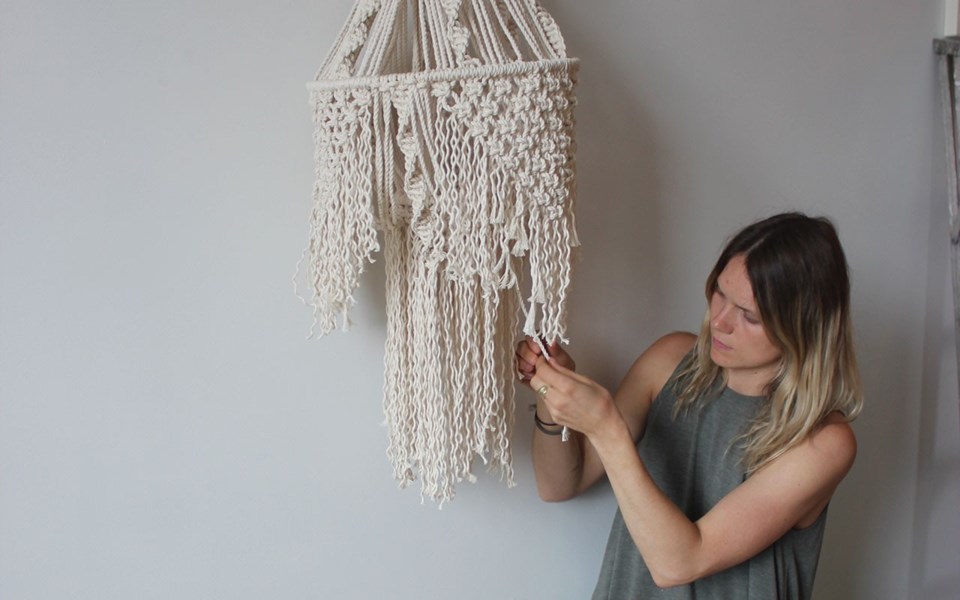 knot art Diane Rudge is an artist who works in macramé and weaving. PHOTO submitted

Diane Rudge has a tip: "I've just been a yes man. Every opportunity leads to (something) else."

Rudge's trajectory from professional snowboarder to successful textile artist—working in macramé and weaving—was anything but straightforward. She started out as a member of the Canadian National Freestyle Snowboard Team, competing in both slopestyle and halfpipe. "That was 100 per cent of my focus at the time," she says. "I put all my energy into it. A lot of athletes, when you get out of that, are a little lost."

While Rudge co-owned the Squamish store Wild and Heart, for a short time she was also pursuing holistic nutrition before deciding it wasn't the right fit. "My last year with Wild and Heart I started weaving and doing macramé more," Rudge says. "(After I sold my share), I gave myself a year to focus on that and see where it would take me—and now I'm here."

"Here" is Ucluelet, where Rudge shares a studio/ storefront space called The Den with three other artists. Thanks to her "just-say-yes" approach—and, of course, the internet—she's been able to take on commissions from anywhere.

"I do a lot of large-scale woven pieces," she says. "Right now, I'm working on a piece for a store in New York ... It's nice to have the freedom to live the lifestyle I want to live. I can ship stuff or order supplies—I don't have to go to Vancouver and stock up on everything."

Still, Rudge finds herself returning to the Sea to Sky corridor regularly. Local shops—like 3 Singing Birds—still display her pieces and, on June 9 and 10, she'll be teaching an Arts Whistler macramé workshop called Knotty Thing: The Art of Macramé at the Alta Lake Station House.

"It'll be fun because it's a two-day workshop. The first day is focused on the foundations. I'll teach them how to make a plant hanger or wall hanging ... I give them the freedom to create their own patterns and let their creativity come out," she says.

On the second day, participants will create a smaller-scale sculpture—like a hammock, light fixture or hanging chair. "With macramé there's the core base of knots," Rudge says. "Once you learn those you can do anything. It's about repetition, creating different patterns in the repetition of those knots. You can apply them in hundreds of ways."

While macramé might have been at the height of popularity in the '70s—Rudge hears from people nearly every day who remember it fondly—it's seen a resurgence in recent year, popping up as wedding backdrops, on Pinterest or in trendy shops.

Businesses have been tapping into that vibe as well. Because Rudge works mostly with large-scale pieces, she doesn't sell products in retail stores, but rather works on commission—often creating pieces to decorate stores.

"The past six months have been amazing," she says. "I've primarily been working with large, abstract pieces, which has been really exciting to see where I can take my art."

For more information or to register visit artswhistler.com/event/the-art-of-macrame.