Grease is the word

Whistler Secondary School brings Grease to the stage of MY Millennium Place for annual musical
May 14, 2010 7:33 AM By: Holly Fraughton 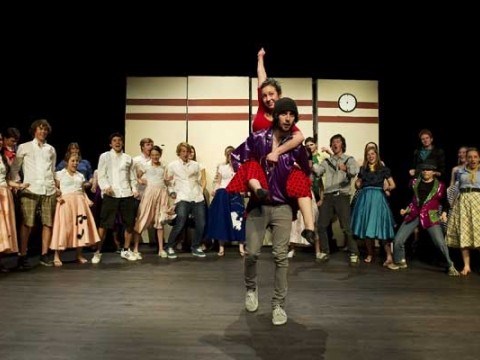 This weekend, the theatre at MY Millennium Place will be filled with black leather, poodle skirts, pomade and music, as Whistler's very own Danny, Sandy, Kenickie, Rizzo and friends take the stage for three nights only.

Whistler Secondary School students have been busily preparing for their eighth annual musical, Grease. On Monday afternoon, the Scotia Creek Gallery just outside the theatre was buzzing with teenagers wolfing down snacks and chatting. They were preparing to transition from the role of students to actors, while organizers frantically tackled last-minute details of the upcoming performance, like trying to figure out where they could source mass quantities of Twinkies.

Hilary Carrell, student director for this year's production, has been involved with the musical project for five years. The first three years she was on-stage in the production. Last year she stepped back to take on the role of assistant director, studying under the previous director in preparation for taking the reins this year.

"It was something that I kind of had been thinking about for a couple years, pretty much since I started," Carrell said. "I liked the idea of directing it and having the opportunity to organize it all and just enjoy the experience."

That experience, as Carrell describes it, has been "intense, but fun."

The cast is bigger than ever again, with more than 80 ­students - almost one quarter of the student body and half of the graduation class - taking part in the production. See, over the years, the annual high school musical has become something of a rite of passage for local students.

"It's kind of like something they feel they can't miss out on," Carrell said, shrugging and smiling.

Rebecca Ford, consulting director for the student-led production, has witnessed student interest in the musical continue to grow over the four years she has been involved.

"The kids are getting more confident in what they're doing - the directors, the performers - so more people are hearing how much fun it is to do it," Ford said.

This year, the cast began holding rehearsals in January but had to take a month off for the Olympics.

"We're actually short a month of rehearsals than any other musical before, so it's been a bit of a push," Carrell said.

To help make up for lost time, Carrell selected the cult classic Grease for this year's production.

"I wanted to do something fun and something that people already kind of knew, because it makes learning the songs easier and gets people in the community interested in coming out and seeing it if it's a production that they recognize," Carrell explained.

Ford was "thrilled" to hear that Carrell had picked the well-loved '50s musical as this year's show, not just because it's a fun show to stage.

"We also knew with the Games that we were losing over a month's rehearsal time, so having a show that everyone was familiar with, it really made losing that month a little easier," Ford said.

But as Carrell quickly points out, many of the songs and details from the original stage script were adapted and changed for the actors playing the roles in the movie.

"A lot of people have ideas from it mostly because of the movie, so it's hard because there are actually quite a few things that are different from the movie," she said.

And while they tried to stay to the original stage script, diehard Grease fans don't need to fret - the students opted to include a few of the anthemic songs from the hit movie: We Go Together, You're The One That I Want, and Greased Lightning all made the cut.

"They're both really talented singers and they both have a lot of fun. They've both been involved in the production before," Carrell said.

The cast will be backed up by a live ensemble comprised of musicians from throughout the community, led by Janet Hamer and Alison Hunter. Costuming, coordinated by a team of parents and community volunteers, probably posed a healthy challenge, with everyone sent home to scour their closets for long-forgotten '50s gear and their father's black leather jackets.

The musical is always a sold-out show and this year is shaping up to follow suit, with the Saturday evening performance already booked up as of Monday afternoon. The Friday and Sunday shows were well on their way to being sold out, as well.

"I think it's really a lot of fun and there's always an awesome energy in the crowd and from people watching," said Carrell. "And I just think it's a really good community event, even if you aren't from around here!"