Great Bear Wild opens up the beauty of the B.C. coast 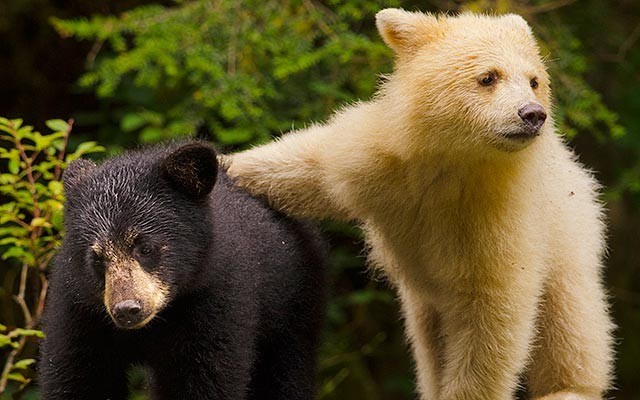 In the Great Bear Rainforest, which runs along the British Columbian coast from north of Prince Rupert to the northern tip of Vancouver Island, the ocean and the land are in permanent interdependence.

Photographer Ian McAllister has spent years capturing the relationship, which he has brought together in his book, Great Bear Wild: Dispatches from a Northern Rainforest.

The 200-page book has 120-colour photos taken by McAllister over years, and is augmented by stories about the animals and landscape — and the people.

McAllister has covered the region for the last 25 years. He is making a multimedia presentation on the book at Whistler Public Library on Wednesday, Oct. 22 at 7 p.m.

He laughs when asked how long he worked on the book. "I was working on it for years, and did a few other books along the way. But this is the is the book I'd always hoped for in terms of incorporating more of the underwater world and the marine world with the terrestrial world.

"The underwater photography and exploration was not without its challenges, but it took a while to do it some justice. Eventually you have to close the project, and there it is."

The book is divided into six chapters about the key ingredients that make the Great Bear Rainforest so special: The inlets that dot the region, the rainforests, the unique sea-going wolves, the fish, the ocean — and, of course, the bears.

The ghostly white spirit bear, a unique species, is beautifully represented at work (hunting for salmon), at play and at home along side its darker relations.

McAllister wants British Columbians to recognize how fortunate they are to have this natural heritage. He worries about the future of the region.

"Our provincial and federal governments are making plans to potentially destroy it in the stroke of a pen," he says. "If these pipelines are built, and all of these LNG terminals and plants and the associated tanker traffic are allowed to go ahead without any reservations, it will fundamentally change everything that we know about this coast."

McAllister says there has been some success at creating protected lands and conservancies, with approximately 30 per cent of the terrain protected. But it's another story when it comes to the Pacific.

He says: "Canada has the longest coastline in the world and yet ranks almost at the bottom in terms of how much of it is protected. We've only protected about one per cent of our marine waters in Canada, which is absolutely shocking to most people in the country. It's a national embarrassment.

"That was part of the motivation for the book. To show both how there is this difficult to define world between the marine and terrestrial worlds. One feeds the other; it is an interface that is completely symbiotic. So many of these species that I describe or illustrate in the book spend part of their life cycle in the ocean and part of it on land."

He doesn't forget the people either, with images of fishing families and a very poignant nighttime shot of the memorial built where the Queen of the North Ferry sank in 2006, with the loss of two lives.

But his emphasis is the natural world.

"Part of me felt that, especially through the joint review panel hearings that were kickstarted by Enbridge's formal application (to build an oil pipeline to Kitimat)... it was the lack of voices for the wildlife that exists here, above and below water. If a species happened to be listed under the Species At Risk Act, then there might be some peer-review publication that support further protection for them," he says.

But the federal government virtually ignored those recommendations, and approved the pipeline, he says.