Deanna Knight and the Hot Club of Mars perform at the Brackendale Art Gallery on Saturday, Jan. 17
Jan 14, 2015 5:00 PM By: Cathryn Atkinson 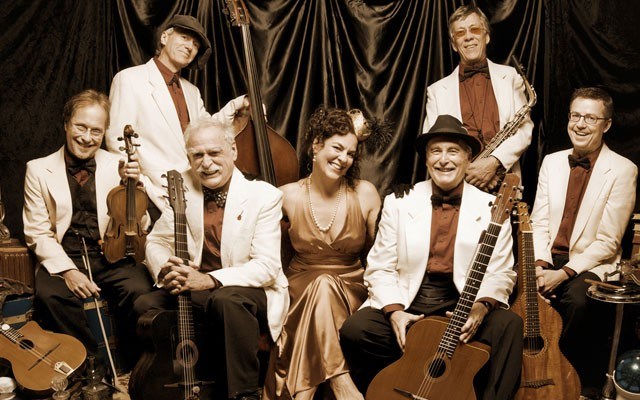 The word "jazz" is scary to some.

Deanna Knight, the chanteuse from Vancouver gypsy jazz ensemble Deanna Knight and the Hot Club of Mars, tries to anticipate this.

It still baffles her, though. Gypsy jazz, in particular, gets right to the heart of dancing and good times, Knight says.

"The word 'jazz' can just turn some people off. It's crazy but it's true," Knight says. "I've been trying to market us more as a world rhythm gypsy swing band, because the word 'swing' is fun."

She adds: "It's a really happy style of music, it's really upbeat."

Gypsy jazz is the epitome of "a great evening out." The band performs at the Brackendale Art Gallery in Squamish on Saturday, Jan. 17 at 8 p.m. Tickets are $20.

"It's our annual appearance and there is a little bit of room to dance there," Knight says.

The Hot Club of Mars are return visitors to the Brackendale Art Gallery. They usually play there the same time of year, during the annual eagle count.

The optimism of the music means it is accessible, both for younger people who might not know the repertoire and seniors, who do. Knight says this keeps them busy with gigs.

"It runs a very wide demographic, which gives it that great appeal," she says. "We can cross over from jazz festivals to folk festivals.

"The one thing I love about The Hot Club is that we can play so many diverse events. We play swing dances for the young swing clubs, swing dances for the seniors. We play lots of gardens and summer concert series, which I love because we perform for all ages. I love seeing children running around and dancing."

She has been with the band for 13 years "I've been their longest running chanteuse. There were many before me."

Knight had just moved from southern Ontario, where she had been performing with a 13-piece big band and arrived in B.C. knowing no one in the music industry.

"I packed up and ended up here on a wing and a prayer. I was pretty nervous to meet the whole musical community and network and put the band together. That's a daunting task because you have to make sure everyone gets along and they're professional and everyone is on the same page with their repertoire," says Knight.

But they did, they flourished. The rest of the Hot Club of Mars includes lead and slide guitarists Michael Dunn and Don Kellett, flute and saxophone player Mark Dowding, rhythm guitarist Steve Szabo and violinist Tom Neville. The band has been around for decades, since the late 1970s, Dunn, now 72, is credited with bringing gypsy jazz to the region.

"I've been lately referring to him as the granddaddy of gypsy jazz — and it's not his favourite term — but it suits him very well," Knight says. "He has mentored everyone in the region because he is also a world-renowned luthier (maker of stringed instruments) for that particular style of guitar. Everybody knows him because of that as well."

This meant that Knight slipped into an already-established band with a fan base and a professional team of players who get along.

The Hot Club of Mars has two CDs and along with the traditional sounds coming from gypsy jazz talents of the 1920s, '30s, and '40s such as Django Reinhardt and Stephane Grappelli.

But they have their own compositions and also draw on a wide range of musical styles that are adapted to their jangly sound.

"The band does play a few of my compositions as well, though I don't write particularly in that style, but I have a few songs that have worked nicely with the band. That has been a nice bonus for me, to have my writing showcased with the band," says Knight.

They also have adapted Hawaiian music, tangos and bossa novas.

"I'm trying to bring in a lot more contemporary pieces as well, and Canadian singer-songwriters, and trying to showcase their music in a gypsy jazz style. We do a Roy Forbes tune, and another by Danny Michel," says Knight.

She adds that while they play the major jazz festivals, as might be expected, they want to branch out more into folk festivals and similar events.

"We are busy and play a fair bit and I'm really happy with the amount of performance we play and the stages we land on. I think folk can be more of our community, to tell you the truth. Michael is an amazing workshop facilitator. He's full of knowledge and stories," she says."That's folk festivals for you; you're on stage with other players trying to play Bob Seger tunes. My guys can do anything and they're fearless. Their improvisational skills are high, plus they love to workshop and teach as well."