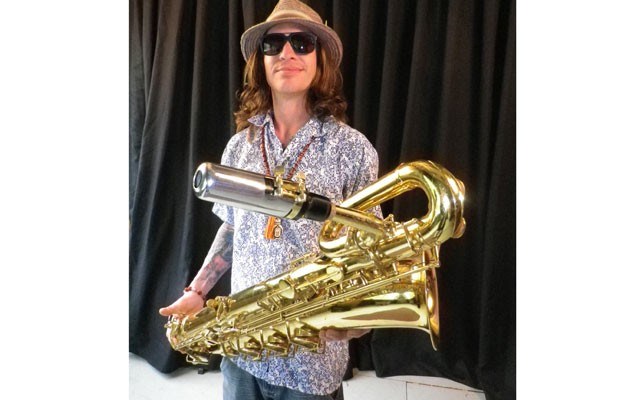 YOUR MOM NEEDS HELP Whistler musician Scott Mitchell is asking the community for help after his beloved saxophone, Your Mom, was accidentally damaged by a bar patron several weeks ago. Photo submitted

Mother's Day may have come and gone, but that doesn't mean Whistler musician Scott Mitchell doesn't want to fix Your Mom.

Well, not your mom specifically, but rather the baritone saxophone he coined with the matronly moniker, which was accidentally damaged at the Crystal Lounge several weeks ago.

"I always have my big baritone saxophone sitting on a stand in the corner of the room, and I took a break from playing music, went outside to have a smoke and I came back in and all of a sudden the horn wasn't playing right," Mitchell says. "I was like, 'What the hell happened to my saxophone?'"

The 32-year-old musician, who plays regularly with reggae outfit Kostaman and The Good Vibrations, as well as blues and funk band The Sociables, heard weeks later from someone who witnessed the mysterious musical mishap that a drunken patron of the bar had tripped on the saxophone stand and landed on top of the instrument, causing significant damage before bolting out of the bar without a word. Now, Mitchell is turning to the community for help with an online campaign he launched last week on Indiegogo to raise $1,000 to repair his beloved sax. The man known as "Ninja Lips" for his virtuosic playing abilities also took to the Whistler FM Après Lounge last week in an effort to raise awareness of his campaign.

"I'm very optimistic that people will help out. I'm at about the 20-per-cent mark right now and I think it's just a matter of continuing to put it out there," says Mitchell, who estimated that a new baritone would cost him between $3,000 and $4,000. "A lot of people have been very supportive but there's also a lot of musicians in town... who are in the same boat as I am: They're broke and they live in Whistler."

A self-taught musician, Mitchell explained how he discovered his passion for the baritone over two years ago after playing both alto and tenor saxophones for the better part of a decade.

"I finally was able to get a baritone, and I felt like a guy who played guitar for a decade and then picked up a bass, and realized, 'Holy Crap, I'm a bass player!'" he says. "From playing with different musicians like Kostaman and Biggins of The Sociables as well, my style has really developed and I feel like the baritone was the instrument I was really meant to play."