Arts Whistler has been releasing its Hear and Now series throughout the pandemic. They invited Pique to sit in on the final recording featuring Whistler’s Red Chair
Jan 4, 2021 10:00 AM By: Alyssa Noel 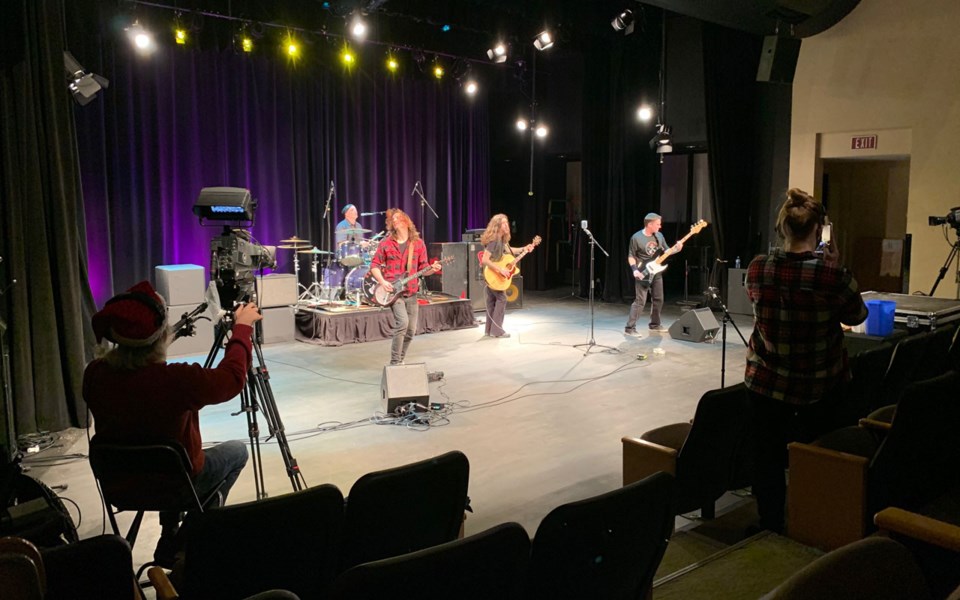 Red Chair performing at The Maury Young Arts Centre during a recording for Arts Whistler's Hear and Now series. Photo by Alyssa Noel

Imogen Osborne hands me a pair of purple earplugs in a small, sealed bag.

I hesitate before taking them as I do some quick math. My eardrums have remained in a pristine state for the past 10 months—definitely unexposed to rock ‘n’ roll decibels by a long shot. Does that make them more in need of protection for the evening ahead or could they use a little toughening up?

I take them, but quickly shove the bag in my pocket.

Osborne, programs and events coordinator for Arts Whistler, three camera people and I are spread across the very empty theatre in the Maury Young Arts Centre on a Friday night before Christmas for the last recording of Arts Whistler’s Hear and Now: Whistler’s Local Music Celebration Online.

While tonight’s show, featuring Whistler rock ‘n’ rollers Red Chair, won’t be posted until March 4, it marks the 17th band to record in this space during the pandemic.

“They weren’t all [recorded] in order,” Osborne explains. “It just happened that way. It’s a good one to end on.”

The band, made up of lead singer Adam Wilson, guitarist Cam Hyde, bassist Derek Stembridge, and drummer Frankie G., is loading in, clad in masks.

The process, at this point, seems like a well-oiled machine.

The cameras, Osborne says, are borrowed broadcast cameras because the ones Arts Whistler ordered are still en route.

“Ours aren’t quite as big,” she adds.

When the pandemic hit, the organization quickly pivoted to upgrade the theatre into a studio where they could record performances (thanks in part to some grants).

Onstage, the band is now into soundcheck. In regular times when I found myself at a concert before the show started, I would scroll mindlessly through my phone waiting patiently for the lights to dim. But in this foreign-yet-familiar setting where I’m the only real audience member, I feel like I need to take in the scene, memorize it, and never take it for granted again.

“These pants,” Wilson says, standing in front of the mic, “you fan them out and right away it keeps everyone six feet away!”

He’s wearing a pair of bell bottoms, reportedly gleaned from his dad’s closet, and swinging them around.

While the mood is upbeat—everyone seems pleased to be out of the house and about to play or listen to some live music—the atmosphere is still inevitably punctuated by just how strange this all is.

The soundcheck ends. “This is the waiting part,” Osborne warns.

“We’ve been waiting since March,” Stembridge says. “It’s all good.”

Finally, a signal comes through the headphones. The crew of two upstairs directing the recording are ready.

The band kicks off the first of their four-song set with their original track “Give It All.”

It’s high energy, despite the fact that they’re playing to a five-person room—and a future audience three months from now.

I have to remind myself to hold back applause—lest I be the person to ruin a perfectly good take. It feels so bizarrely counterintuitive.

“How was it?” Osborne asks them after a third take when everyone appears to be satisfied.

The band keeps the banter light throughout and they seem genuinely happy to be playing music on a stage.

By the third song, “Hang On,” everyone has loosened up, but the sound is tighter than ever. The showmanship has even been cranked up a notch as the band figures out which camera to play to—and with. Wilson sways around with the mic while Frankie tosses his drumstick in the air and catches it.

“You guys are so dramatic,” the camerawoman says. “It’s so good!”

The rest of us even start clapping.

It sounds silly, but after months of experiencing music through a screen I’m struck by the fact that I forgot about one essential element of live music.

It’s not merely sound; it’s something you feel—viscerally—rattling your ribcage, vibrating into your pores. It’s loud and consuming and demands your attention by sheer force.

And I can’t wait to experience it again someday with a room full of people.

Hear and Now performances return to Arts Whistler’s Facebook page and YouTube every Thursday at 7 p.m. on Jan. 7. To see the full schedule and watch old performances, visit artswhistler.com/hearandnow.