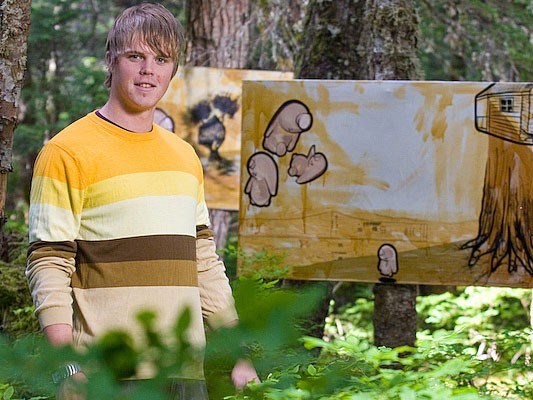 Artist Stan Matwychuk will showcase original new works for his first solo exhibition in Whistler for the month of October at MY Millennium Place. An artist reception takes place on Saturday, Oct. 6 from 7 to 10 p.m. in the theatre’s upstairs gallery.

The title of his show is Derivative: A Contemporary Collection of current works by Stan Matwychuk.

His works are inspired by the mathematical definition of a derivative: “a quantity measuring the rate of change of another.”

“I’ve adapted it to mean the rate of change of an instantaneous idea,” Matwychuk said. “It’s about spontaneity and how ideas come into your mind and how when they are approached you can go one way or another, and make that choice. Intuitive is a good way to put it. At the same time, I am trying to keep it all organized and keep a cohesive visual that people can grasp.”

Audiences, both close to home and internationally, are grasping the young visionary’s work, which seeks to promote awareness and equality for all.

Since the Ontario native’s exhibition at the 2007 World Ski and Snowboard Festival’s street-urban show, called Brave Art, Matwychuk hasn’t been able to put down his paint brush.

He was recently profiled in the 2007 Snowboard Canada buyer’s guide as one of Whistler’s leading underground talents.

In addition to inspiring art onlookers, he has inspired art in others by teaching a mural workshop at the Whistler Children’s Art Festival. He is also currently working with the Whistler Youth Centre, where he will recruit aspiring high school artists to transform the grey stairwell leading from the theatre foyer to the downstairs youth centre at MY Millennium Place.

This summer his big-picture thinking was sprayed onto the underside of the Terry Rogers Bridge on Lorimer Road, that crosses Fitzsimmons Creek. The day of anyone walking the Lost Lake trails to the Cross Country Connection is inevitably brightened by the rainbow rays cast out from the mural onto a forested scene spray painted by Matwychuk with fellow creative comrade Chili Thom as part of a Whistler Public Art Project.

“Being an artist you have to be open to each other’s work,” he said of his experience of working with Thom. “I can definitely apply more background to my work. (Chili) allowed me to think of things differently while at the same time, I am trying to define my own voice.”

His voice rang clear, echoing through the historic mining caves and mining machinery rooms at the Evolution Metamorphosis art exhibit at the B.C. Museum of Mining in Britannia last month. The rate of change spun wildly as his mind turned around the process of making copper for the exhibit celebrating mined materials.

He was fascinated by the process of extracting copper from an open pit mine, extracting the metal via a chemical process, and finally shaping it into wire, or a copper penny in the case of his artwork.

“A lot of work goes into it,” he said. “I was impressed and humbled by the idea that this metal is everywhere and that even your body needs a certain percentage of copper to keep healthy.”

Copper paint, spray paint and pennies run over by trains worked their way onto his boxed works, illustrating collages of mining machines and trains.

Box paper canvases are the mainstay of Matwychuk’s ever-evolving collection, but he isn’t afraid to channel his creativity in other dimensions — such as the one foot by one foot canvases he produced for the Square Foot exhibit at the AWOL Gallery in Toronto. Matwychuk was one of 500 artists from around the world selected to showcase his talent at the exhibit.

“I work in a process and series, so I try to maintain my old view of things, but take influences from everything that is coming through me,” he says.

One of those things was the realization of how product can really affect people, for the better. He worked with New Era to illustrate a series of baseball caps at the Artoleptic Festival in Seattle.

“The form was really great,” he said. “I like the idea of a hat and how everybody has one. Hats are personal. They are worn on your head, which is an important part of the body… It was fun to spread ideas that way.”

Social messaging and awareness is an important part of the Matwychuk palette. He co-founded Homebase Studios with artist Kate Power to provide support for other cutting-edge emerging artists.

All of Matwychuk’s ambitions will work their way into the MY Place showing. Twelve new hats will be tipped along with eight large stretch paper works, six panels and an assortment of smaller pieces on found objects and wood, including an installation work with a set of arms.

A film presentation from past showings will be screened with an artist celebration taking place at Seven restaurant afterwards.