Local world travelers host fundraiser to raise funds for malaria cause and expose third-world-country children to the joys of travel
Jan 18, 2008 6:45 AM By: Nicole Fitzgerald 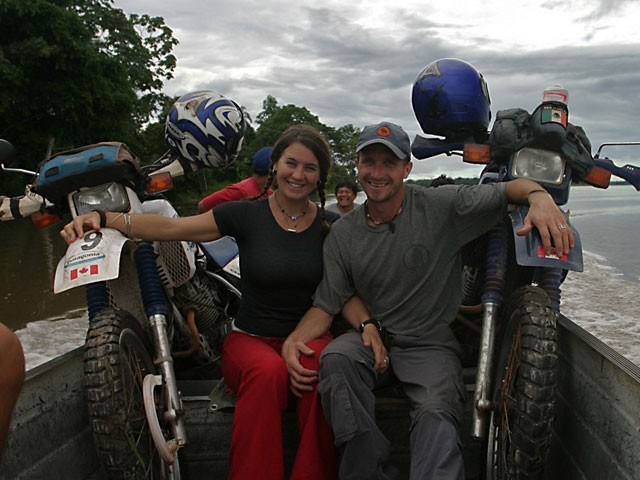 On the Road Again World travelers Todd Lawson and Christina Tottle will set off on another motorcycle adventure in their continuing effort to make the world a better place.

Photographer Todd Lawson has always wanted to go back to Africa.

He fell in love with the continent when his brother Sean and himself rode motorcycles through six countries over three months in 1999.

However, adventure turned to tragedy when his brother died from cerebral malaria in less than five days.

“I’ve always wanted to go back just to feel Africa again, and experience that freedom that we felt,” Lawson said.

This time, the Squamish photographer will return to Africa with more than just memories of his brother, but with much-needed bed nets to assist the efforts of the Against Malaria Foundation and funding for field trips for African children.

“Obviously my brother’s death was a catalyst to become involved with a malaria-related organization,” Lawson said. “This partnership allows us to give something back to all the incredible people we meet that make travel so memorable. It’s really a no-brainer: deliver mosquito nets, save lives. It’s just that simple.”

Lawson along with his traveling partner Christina Tottle will host a fundraiser for the cause on Saturday, Jan. 19 at 8 p.m. at Merlin’s.

The evening will include a slide show of the duo’s 19-month motorcycle adventure through Latin America last year. The slide show will be a visual journey of the 23 countries Lawson and Begin traveled through. Lawson, who is a freelance photographer and photo editor of Mountain Life Magazine, took all of the 700 photographs .

“(The show) really appeals to a wide variety of people, from travelers to motorcyclists to anyone who loves photography,” Lawson said.

“We’ve showed this slide show to more than 2,000 people in ten cities and towns throughout western Canada,” Tottle said. “Some people were in tears at the end of the show, and we’ve inspired other people to actually quit their jobs, buy bikes and hit the road. Now that’s rewarding.”

The two will buy four-stroke enduro motorcycles in Cape Town, South Africa on February 3 and then head north traveling through 30 to 35 countries, covering 40 to 50,000 kilometres with no gps, guidebooks or planned route. Their final destination will be Casablanca, Morocco.

“When I travel, I always think about the kids that we pass along the road,” Lawson said. “What does their future hold? Will they ever have a chance to live a life of fun and freedom, or will they have to worry about war, disease and poverty for the rest of their lives?... If we can save the life of even one child or help children lead a better life or expose them to life outside of their tiny villages, hopefully they will live a rewarding life as well. Life would be a pretty empty place without the smile of a child.”

Lawson and Tottle are working to ensure there will be plenty more smiles.

The two founded the Sean Lawson Young Travelers Foundation, an organization that helps third-world-country children learn about the world. The foundation aims to educate children about the diverse geography and cultures of the world and to give children a first-hand experience of traveling for enjoyment.

Funds from the slide show fundraiser will help children from small schools to take a field trip within their own country.

“By taking kids on field trips, they get the best of both worlds,” Lawson said. “They can see new things with wide-open eyes. They can meet people outside of their towns and villages. And they can learn about their own country while doing it, while traveling.”

The two will be taking children on the field trip as well as personally delivering bed nets to reach villages most in need. Through their web page againstmalaria.com/motosagainstmalaria, Lawson and Tottle have raised $4,500, which translates to more than 800 bed nets.

Tickets for the fundraising evening showcasing the motorcycle duo’s Whistler to Chile odyssey are $10 at the door.