Ignoring the boundaries for Intersection 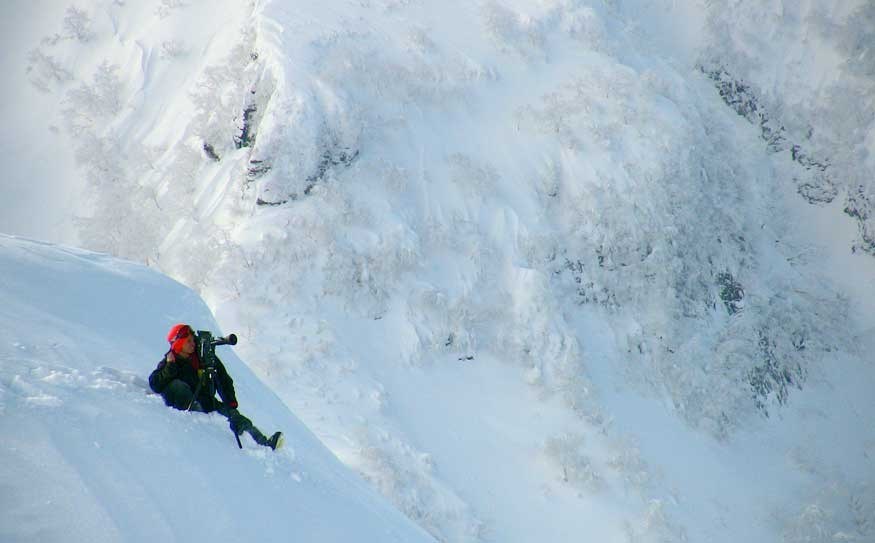 Heart Films' Keiji Tajima on a shoot. Heart Films is one of six competitors in Intersection this year, and the only company aimed at a foreign-language audience.

Intersection is a perfect marriage of the festival's sports and arts components.

This year, each team has seven days to complete a film and are gunning for the $15,000 top prize, which will be awarded at the gala on Wednesday night.

But who are this year's competitors? Read on:

The company name says Heart Films but the heart — and head — of the production team is Keiji Tajima. He does it all —manages the riders, shoots, edits, etc.

"He's so underrated for what his capabilities are in the snowboard industry," says Heart Films producer Yuho Sekihara.

The films are sold globally with the primary audience in Japan. The Whistler-based film company was founded in 2005 originally to showcase Japanese riders.

Sekihara says that while the competition will be used to gain profile for the company and for Tajima, she says their involvement with Intersection really is about promoting the riders, all of whom will be flying in from Japan for the shoot.

"We want to give the riders the opportunity to be showcased here," Sekihara says.

Ryan Kelly has learned a thing or two since last year. His focus was divided between the incredibly taxing 72hr. Filmmaker Showdown and the equally challenging Intersection, which resulted in work that he admits could have been better.

And he's been thinking about it ever since.

John Swystun, the affable honcho of NuuLife Cinema Company, says that they'll be more prepared for the unexpected this time around, now that they've been through the ringer once already. Either way, he thinks the competition is still going to be mighty stiff.

"If anything, the people involved last year set the bar so high and I think everyone has it in the back of their head that this shit has to be on point this year, and they have to bring something pretty amazing to the table," he says.

With a couple 72hr. Filmmaker Showdown wins under their belt, including the 2011 title, so the Vancouver company decided to try something new.

"I wanted to do something different, to give some new flavour and see what we can do, given this is a new challenge," says Patrick Henry.

The team lives in one apartment building off Main St., which means Capri Studios is more of a residential collective than any true production company. The fact that they're all neighbours might certainly work to their advantage.

Or not. There's really no way to gauge these things.

Jordan MacDonald says he's the "underdog" of the competition. Footy Fiend has been making snowboard videos for about three years and this is the first filmmaking competition they've taken part of. But really, what does that matter?

"I'm hoping to have some fun, make a quality video and maybe win a little money." That's the spirit.

Yes, they won last year. Yes, they're returning for another shot at glory.

Of course, Darren Rayner says it's going to be a lot easier said than done. It's always something of a crapshoot when going up against five other teams of professionals.

"We go into this contest to do our best, trying to produce something that all of the team is proud of. That's the most important thing," he says.

"If we're not happy with the final product then hopefully we'll just have a video that other people will like."

Tickets are $20 and available through www.wssf.com/estore.