In search of Asymbol-ism in sport, art 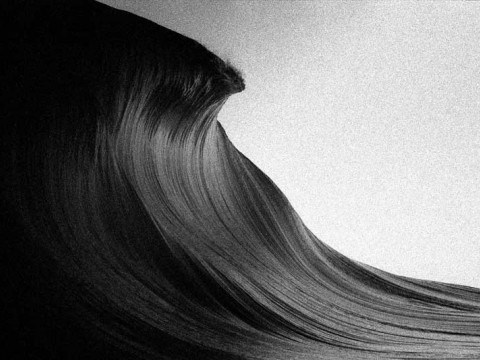 Travis Rice is embedded in many minds as the unknown rookie who rocked up and stomped a backside rodeo on a narrow, 117-foot-long spine tabletop at Superpark 5 in 2001, before going on to become one of most influential pro snowboarders in the biz.

But between trips to the backcountry and the park, this athlete has managed to find the time to cultivate his artistic interests.

When people think about skiers, skateboarders or snowboarders they don't automatically associate them with the realm of art snobs. But on the whole, this athletic community is very aesthetically aware and certainly not afraid to colour outside the lines. In fact, their equipment often also functions as an unconventional canvas, boasting vivid, powerful graphics and imagery.

Through his work in the snowboard industry, Rice has been surrounded by the aesthetic, and had the opportunity to work with incredibly talented photographers and designers who create board graphics and campaigns. An avid art lover, the pro rider has long supported the arts by buying and commissioning pieces, even co-producing the film That's It, That's All . But now, he's taking his passion to the next level, opening an online and roving art gallery that focuses on high-quality prints and carefully-curated pieces produced by his fellow riders and action-sport lovers.

Rice was in the Alaskan backcountry early this week but found time to talk about his new project, dubbed Asymbol.

"I guess after years of being in and around it, I just started noticing that there was a serious separation between the creators and the appreciators, in terms of some of these top guys' finest works. And I just really wanted to try and create a platform for them that kind of melded the two worlds," he said.

Rather than open a permanent gallery in the midst of an economic recession, Rice and his team decided to cut back on overhead costs and reach a much wider audience (think global) by having an online gallery rather than a physical space. The website, asymbolgallery.com, acts as a "storefront" for the gallery, offering detailed views of the works they are currently featuring. As well, a detailed written description, capturing the back story of each piece, is available when you click the "Behind The Scenes" tab. There, you'll find the powerful personal moments and memories that inspired the artists/photographers to create.

Through Asymbol, Rice and his creative partners wanted to honour the "real" stories behind the snowboarding industry, selecting pieces that could somehow be woven into a historical tapestry of the people and history of the sport, looking beyond the Olympics and the X-Games.

Rice collaborated with artist Mike Parillo on Blessing and Confrontations, one of the pieces in the collection, providing the conceptual theme for the piece and allowing Parillo to interpret that vision.

"He has an incredible ability to take those ideas and bring them into a complete visual place," Rice said.

The end result is a brilliant, sunshine yellow canvas infused with bold, graphic strokes and movement.

The paintings, mixed media pieces and photographs capture a range of emotions, everything from the pure joy of the perfect day on the mountain to sudden, paralyzing fear of returning to the slopes for the first time after experiencing an avalanche, as photographer Tim Zimmerman describes in the "Behind the Scenes" blurb for his shot, Deserted Mountains.

He writes: "I hadn't wanted to shoot on-slope at all, but somehow at the end of the day I found myself up on this ridge. In order to get back home I had to snowboard down to the heli. I didn't want to do it. I was completely terrified. So I was just standing up there, thinking about this run, just about to put my stuff away, when I looked over and saw this. This mountain has never been ridden by anyone before. It doesn't even have a name. I hadn't paid it much attention earlier, but this shadow had just come up the valley and contrasted with the light in a way that made it look like a giant ice cream scoop, which I thought was nice. And I'm not saying that it made the ride down to the heli worth it, or less scary somehow, but I'm glad I was there to take the picture."

On top of their permanent online gallery, Asymbol's pop-up gallery will also be touring to select locations. In February, the current exhibition debuted to crowds in Aspen. Next up, they'll be showcasing their debut collection of curated iconic photographs and art pieces from the snow, surf and skate realm here in Whistler. Each image in the collection is offered in a limited-edition run of archival-quality, signed and numbered prints through their website.

They've tried to keep the price point reasonable to ensure that the collection is accessible to all of the young, aspiring art collectors out there, with a portion of all proceeds from AsymbolGallery.com donated to the environmental non-profit organizations Action Sports Environmental Coalition (ASEC) and Protect Our Winters (POW).

Asymbol's pop-up gallery will be in Whistler at the Blake Jorgensen Gallery throughout TWSSF (Friday, April 16 to Sunday, April 25, noon to 7 p.m.). They're also hosting an opening reception for friends and fans at the gallery on Wednesday, April 21 starting at 7:30 p.m.