The multitudinous Lil'wat artist Levi Nelson on his first solo exhibit
Oct 31, 2019 2:00 AM By: Brandon Barrett 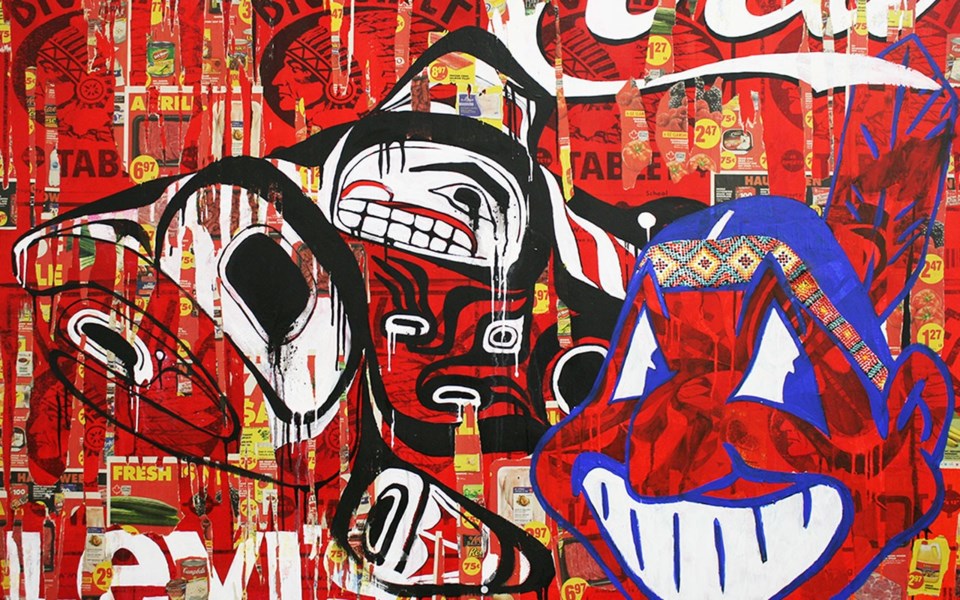 Construction of the Imaginary Indian (2018), one of the works featured in Levi Nelson’s first solo exhibit, After the Blast, which opens next week. Image courtesy of Levi Nelson

Levi Nelson still remembers when the Kevin Costner-helmed Western, Dances with Wolves, was released to much fanfare 20 years ago. To a young Lil'wat boy who had never seen faces that looked like his on the big screen, the film, which tells the story of an American Civil War soldier who develops a bond with a band of Lakota, was a revelation.

"It took me a while to realize that it was really just a story about Kevin Costner being this white hero who saves the Lakota people," Nelson says. "But it was something to be proud of because I didn't see First Nations people on TV."

Like a lot of modern Indigenous people, Nelson grew up straddling two intrinsically different worlds, and it has long been this sense of duality that has defined him as a visual artist. He is a proud Lil'wat who never learned his people's native tongue, because his grandma, a residential school survivor, knew full well the danger that could come from speaking Ucwalmícwts openly. He is a queer, First Nations artist endlessly fascinated by Renaissance images of Christ and the Virgin Mary. He incorporates traditional Aboriginal art styles in a decidedly contemporary, often neon-splashed style. He reimagines long-held Indigenous stereotypes through the lens of a largely white-dominated, Eurocentric art world.

"I think about it as there being all these different facets that play into who I am as a person, being from this traditional territory of Lil'wat, but also growing up with a colonial mindset," he says. "There are these tensions that create a lot of interesting dialogues that can be transformed into painting."

Nelson will be pushing those dialogues forward with his very first solo exhibition, After the Blast, running Nov. 7 to Dec. 29 at the Maury Young Arts Centre. Featuring more than 20 works, the exhibit showcases Nelson's bombastic style through oil paintings, silkscreen and collage.

It took some years for Nelson to land on visual art as his preferred medium. In high school, he was committed to becoming a fashion designer, and travelled to Vancouver twice a week for classes. He also pursued makeup artistry, acting, and did background work whenever he could find it. Then, one day while washing dishes at a pizza parlour in the Kootenays, Nelson had a meltdown.

"I realized I couldn't do this for the rest of my life. I re-examined my life and looked at what I was doing, and throughout high school and fashion design school and acting school, I was painting," he explains. "I took these paintings and compiled a portfolio for Emily Carr University, I applied and got in."

That was nearly four years ago, and since then, Nelson has capitalized on the relative artistic freedom afforded painters to forge his own distinct iconoclastic style that at once pays homage to more traditional forms of Indigenous art while actively re-envisioning them for a new era.

"Being able to paint or draw or create prints from my own perspective and my own vision, that's what really appealed to me. Not only that, but being able to have a voice and say things that the everyday person couldn't get away with," Nelson says. "I noticed a lot as an artist you could get away with saying political things without them having a really harsh effect on who you are as a person or your career."

Although his art can veer towards the political, painting is also a way for Nelson to make sense of the many divergent influences that hold sway over his work.

"I get an idea and the need is to get it out of myself in order to move on to the next idea. Just to see where that takes me," he says. "You'll notice from my show that's coming up, there are so many different styles of paintings and so many investigations of different historical painting movements, where I'm really wanting to experiment with everything, kind of like I did with fashion or acting or makeup artistry. I've always had a need to try everything I've ever wanted to do, just to see how it was."

So, after growing up believing he came "from a lower class of people" without any real positive representations of First Nations people in the media, what does Nelson hope Lil'wat youth will take away from his show, held on their traditional territory?

"I think it's a great thing that Yvonne Wallace with utszan, and artists like myself are trying to make a name for ourselves and are, not necessarily wanting to become role models but having to fulfill that spot for people who are younger than us," he says. "It's someone for them to look at and say, 'Hey, I can do this too. There's room in the larger society to be myself and not have to be ashamed.'"

Arts Whistler is hosting an opening reception for After the Blast at the Maury Young Arts Centre on Thursday, Nov. 7 from 7 to 10 p.m. Learn more at artswhistler.com.