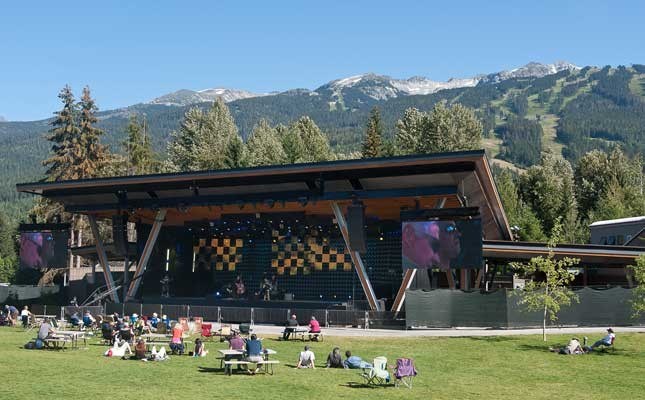 Festival trouble A small crowd watches a performance at the 2011 Jazz on the Mountain at Whistler. The 2012 edition is plagued by a hefty deficit and strained relationship between festival producers and the RMOW. <b>Photo BY scott brammer/coastphoto.com</b>

Jazz on the Mountain at Whistler (JOMAW) will not return for 2012 unless the municipality steps up with money and conceptual help.

He's asking for an answer by April 22. In an email exchange with Schwisberg, the RMOW's John Rae states alll JOMAW application materials will be reviewed in May. Schwisberg says it will be "too late" by then and he's now urging the community to write to council to save the festival.

"Without municipal engagement (Jazz on the Mountain at Whistler) is not going to come back," he says.

Despite JOMAW being a financial bust Schwisberg says that critical reception to the 2011 festival has been overwhelmingly positive, particularly from the artists. As a result, JOMAW has been offered "jazz royalty" to play at the festival — including Diana Krall and Michael Bublé.

"The royalty of the jazz world want to come here," he says.

"...(But) we don't have the budget to bring Diana Krall here just yet," due mainly to the deficit.

At the root of Schwisberg's concerns over the RMOW's mismanagement of his brand are a series of advertisements in Vancouver publications advertising the jazz festival as part of the municipality's free Whistler Presents concert series —without his consent. This was a critical factor in poor ticket sales, says Schwisberg.

According to a municipal spokesperson, the Whistler Presents marketing campaign was "an extension of the Tourism Whistler (2011) summer marketing program."

In an email to the Pique TW's Breton Murphy explained: "With input from the RMOW, Tourism Whistler developed and executed the marketing of Whistler's festival and events programming for 2011."

Later ads made the distinction between the free concerns and the ticketed events for the jazz festival after JOMAW called attention to the misleading nature of the original ads. But the damage had been done, says Schwisberg.

A key missing step in how the situation unfolded, says Scwisberg, was the failure of the RMOW to ask JOMAW to sign off on the ad copy.

In an ad that ran in the Georgia Straight in the August 4 edition under a headline reading: Summer in Whistler is Fresh, Free, Fun — the listing under Sept 2-4 says, "33 GIGS IN 3 DAYS. Whistler Village gets all jazzed up for the first JAZZ ON THE MOUNTAIN music festival."

Says Schwisberg: "That's a very serious challenge to overcome when people expect it to be free because it's advertised as such."

"We had the volunteer reports telling us repeatedly that people were coming up to the gate and were rather surprised that they were asked to buy a ticket because they had read that it was for free.

"I don't think there's a merchant here who would be happy if the municipality said, 'Those are my good and services and I'm giving them away for free.'"

The ad, which also ran in The Vancouver Sun, used the word "free" three times, while making no mention of the jazz festival's ticketed events. The four-day jazz festival, which was held over the Labour Day weekend, offered only six free concerts at the Plaza, — a small percentage of the festival's performances.

The jazz festival was the first — and so far only — third-party event to be held at WOP. It was an experiment of sorts for how the RMOW would manage festivals at the newly created public venue.

According to Schwisberg, it did not go well. If JOMAW returns for 2012, it will not be utilizing the $13.6 million venue.

"(WOP) is not a viable ticketed venue — physically, but more profoundly, the municipality has fuelled the expectation that it's free. That's very difficult to overcome that expectation," he says.

Instead, if JOMAW goes ahead it will utilize the Whistler Conference Centre as its "crown jewel" for larger events. Schwisberg says he is not intentionally slighting the RMOW or the Plaza. It's a case of simple economics.

"It's not a statement. It's a pragmatic reality," he says. "I'd love to see the Plaza used to its highest and best use. I would love to say in 2013 here's Michael Bublé at Whistler Olympic Plaza... but that can't happen until we get through 2012."

The tentative line up for the 2012 includes Jeff Lorber, Michael Franks, "Year of the Cat" singer Al Stewart and YouTube sensation Jake Shimabukuro. The free festival offerings have been trimmed down to only one — a single-night performance by Kool and the Gang.

Schwisberg also attributes the poor ticket sales to the denial of the special occasion liquor license — which would have allowed attendees to drink alcohol throughout the festival grounds and affected the festival's bottom line — as well as competition of the RMOW's free Whistler Presents concert series.

He says the RMOW's mismanagement of the JOMAW brand through its advertising campaign added further insult to injury.

An RMOW spokesperson wrote to Pique in an email, "We (TW and RMOW) worked with (JOMAW) to include them in Whistler Presents advertising. Tourism Whistler led all of the destination marketing activities for Whistler Presents, and developed and placed the ads (working with the RMOW as the executive producer)."

As per their communications strategy, the RMOW deferred all comments to Mayor Nancy Wilhelm-Morden, who could not speak to Schwisberg's charge of brand mismanagement, as she was not mayor at the time, nor was she "following the issue very closely" at the time.

"I have not talked to any of the staff about it. I understand that (Schwisberg) is interested in staging an event this year," says Wilhelm-Morden.

"I believe that staff has been in discussion with him about the event and are looking for some information from him, but other than that I just don't know."

Wilhelm-Morden says that the RMOW has set up a policy framework around the RMI funds, which is overseen by the Festival, Events & Animation Oversight Committee.

Schwisberg arrived from Toronto last week to meet with various community stakeholders, including both the FE&A and RMI Oversight Committees, and says he has found "overwhelming groundswell of support" for the return of the festival.