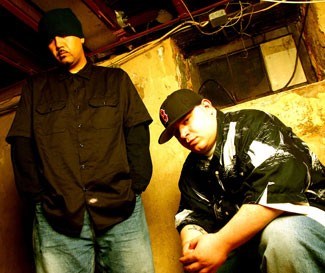 Hard-hitting Philly hip-hop crew Jedi Mind Tricks are bringing their urban assault to Whistler for a show at Garfinkel's on Monday night.

The duo of producer Stoupe (The Enemy of Mankind) with Vinnie Paz on the mic is known for intense compositions of foreboding orchestral samples over driving beats, to which Paz adds uncompromising rhymes that pull no punches in criticizing church and state.

The Jedi’s aggressive delivery plays out in raucous stage shows known to include stage diving and other antics usually associated more with rock rather than rap.

Formed in the early 1990s, Jedi Mind Tricks introduced themselves to the world with the independently recorded Amber Probe EP in 1996, chasing the buzz with their 1997 debut full-length album The Psycho-social-chemical-biological-and-electromagnetic-manipulation of human consciousness, which broke Paz as a relentless rapper of conspiracy theories and anti-religious diatribes.

The duo's latest album, 2004's Legacy Of Blood on Babygrande Records has shown the Jedis have no intention of backing down anytime soon. The album has won critical acclaim for continuing with the fierce "blood-drenched" style the Jedi's brought forth with second album Violent By Design. The sound is exemplified in the side-single ‘On The Eve Of War’ featuring the legendary GZA of the Wu-Tang Clan rhyming over the menacing classical riff best known from the DeBeer's diamond advertising campaign.

If the Jedi's are diamonds, they're definitely diamonds in the rough. The soundscape at Garf's is going to be raw on Monday night. Those that like their hip-hop hard won't want to let this one go by.

Tickets are $12 available in advance from the Electric Daisy Internet Cafe.

Aceyalone in the Bassment, Maestro on the mic at the Beagle

The Bassment, DJ Seanski’s hip-hop Tuesday night at Moe Joe’s, is getting a visit from longtime West Coast MC Aceyalone of Project Blowed notoriety. Acey will be trading off the mic with Bukue One, a fellow West Coast MC, who was last in Whistler performing on the main stage during the Crankworx Festival in August.

Over at the Savage Beagle it’s going to be a Black Tie Affair with a visit from Canadian hip-hop originator Maestro (formerly Maestro Fresh Wes). Maestro will be hanging out in the club all night, rhyming over tracks played by the resident Faction Sound Crew DJs.

Maestro recently released greatest hits album Urban Landmark: 1989-2005, which includes all the old faves including, you know it, Let Your Backbone Slide.