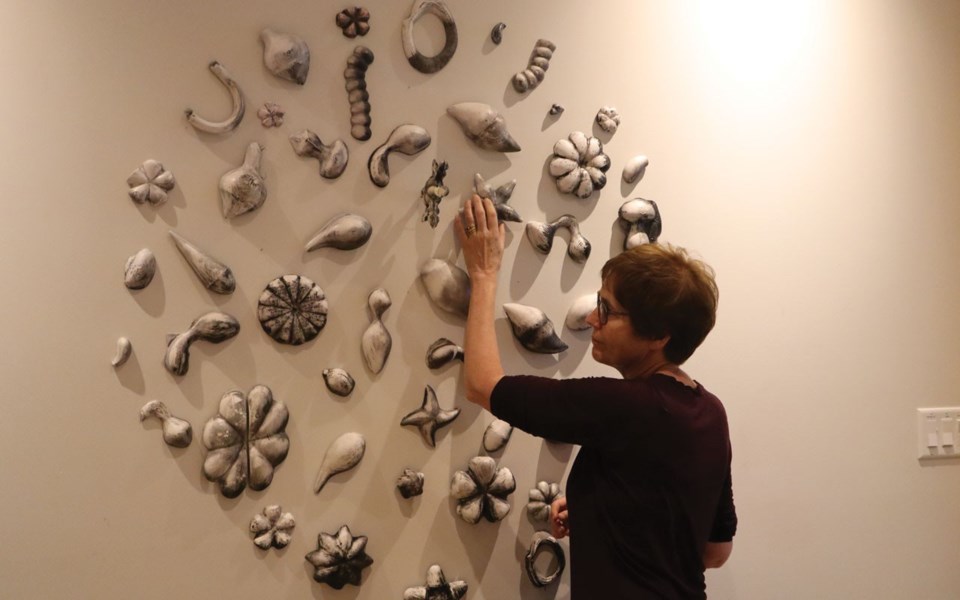 Jenny Judge poses with her piece, Moonscape, currently on the wall of her Whistler home. Photo by Alyssa Noel

It was a big ask.

Around three years ago, the Craft Council of B.C. had given Whistler artist Jenny Judge a solo show—only, they had expected she would turn in glass pieces for her exhibit, as that was the medium she was working in at the time.

"Mountain Object Makers [the co-op studio space she co-ran in Function Junction] folded, I had nowhere to fire and I was really tired of working in glass," Judge says from her Alpine home. "I said to them, 'Will you just trust me? I'm not going to give you a glass exhibition. I'll probably do an installation.'"

Only, when they agreed, "I panicked," she says. "I didn't know what I was going to do."

But, as has been the case in Judge's 30-year career, an idea formed organically, with inspiration gleaned from both her surroundings, and myriad art experience.

"I decided I was going to work in plaster because, as a kiln caster in glass, I used plaster all the time, but not as a material unto itself. I thought, 'I'm going to explore plaster,' and that's what I did," she says. "I would have never envisioned the work to be this when I started. I went with the flow, and it kind of came out the way it did."

With the help of her 3D printer, Judge designed various shapes gleaned from nature, printed them, and then used vacuum-formed moulds to pour plaster into.

"I gave to a Kickstarter campaign for this home-based vacuum former years ago and completely forgot about it," she says. "I was in the middle of thinking, 'How am I going to get this show together?' and this arrives at my doorstep. It was like synchronicity."

What resulted was Wonderments and Materiality: A craft-based installation, her solo show at the Craft Council of B.C. that starts on Sept. 5 and runs until Oct. 10.

Made up of four pieces, the overall aim is to capture a fleeting moment of awe. "The easiest way to understand it is the summer night sky. You're looking up at the stars and it's so much bigger than us. You don't know how to take it all in," she says.

Each installation features several smaller plaster pieces that, collectively, make up a circle. One, currently on display at her home, is called Moonscape.

With a range of shapes inspired by the natural world, each piece is positioned in a carefully chosen spot—and mapped out down to the nail hole on paper spread out in Judge's studio space. One side of each piece is painted black and the other is white, so depending on which side of it you stand, you see a completely different hue.

"I was really working with organic shapes," she says. "The craft space is very embracing—it's different than the white modernist cube art gallery. They told me I could do whatever I wanted. That's where I came up with the wall being embraced. I thought, 'If I have organic shapes, that will work.'"

The other pieces include similar shapes with wildly varying techniques applied to them. There's Alchemy, which plays with chemical reactions to metal; Carnival and Cotton Candy, a whimsical offering in delicious-looking hues; and White Sky, which features neutral tones in order to play with shadows.

That last piece earned her a spot as a Salt Spring National Art Prize finalist. Judge was one of 52 artists from across the country—chosen from around 1,200 submissions by a jury—selected to show her work on Salt Spring Island from Sept. 21 to Oct. 19.

From those finalists, one will receive a $20,000 Salt Spring Prize.

"Getting into the show is a prize unto itself," Judge says. "You get these amazing emerging artists. I'm excited just to see all the other works."

On top of that, as part of her solo show at the Craft Council, she will also be delivering a talk on Oct. 2 from 6:30 to 7:30 p.m. about her series, blending technology and art, and her approach to her work.

One small tip she'll share that can be interpreted as solid life advice, too: when you find a path that feels right, stay on it.

"With this body of work, I didn't let anybody in," she says.

"I didn't take any criticism. I didn't talk to anybody [about it]. I just put my head down and made it. I think it's really hard being an artist because you're always trying to please other people and I think sometimes that gets in the way of the creative process."