Victoria-based band opts to release new No Nations album on vinyl, CD and digital
Aug 7, 2009 7:52 AM By: Holly Fraughton 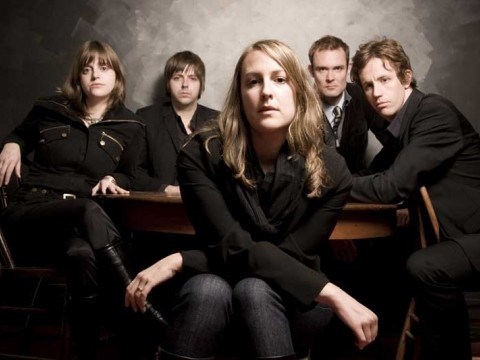 Jets Overhead's overall sound is atmospheric, almost ethereal rock, really, with a trance-like feel heralding back to the days of Pink Floyd, Radiohead and The Who. In fact, they've been dubbed "a laid-back, west coast Canadian answer to The Dandy Warhols" by the likes of Chart Magazine .

"We definitely all do love that vein of music, like The Doves, Radiohead, and that really chilled out but emotional tap that that kind of music can turn on, but it's kind of just a natural thing that happens," Adam Kittredge said after a thoughtful pause.

With Kittredge on guitar, Antonia Freybe-Smith on keyboards, Jocelyn Greenwood on bass, Piers Henwood on guitar, and Luke Renshaw manning the drums, all members except Henwood contribute to vocals. But songwriting is still a completely collaborative process, with each member of the group involved in developing and perfecting songs.

"When it comes to our songwriting process, we write as a group," Kittredge said.

He explained that more often than not, the process of randomly throwing out lyrics when developing a melody seems to work for them. In fact, that jam session approach is how they came up with the title track for their latest album, No Nations .

"So it just came out of thin air as I was writing the melody and we were jamming on the song, and 'No Nations' just obviously has a whole lot of depth of meaning, so it was easy enough to find some lyrics and content to go somewhere with that theme," Kittredge said. "...It came naturally and it came, I think, very organically out of our own life experiences and what we were reading and where we were at in our lives."

Once they stumbled upon this overarching theme, the group ran with it. And while their lyrics are definitely insightful and thoughtful, touching on that overarching theme of global unity, listeners won't feel like they're being preached to when listening to their music.

"We do want people to recognize some depth," Kittredge said. "...I think we're all thoughtful and I think everyone in the band is quite intelligent and opinionated, and we care about what's going on around us in the world."

Jets Overhead first got together in 2003, actually blossoming from a long-time high school band, The Special Guests, which three of the five members were part of.

They just debuted No Nations in China earlier this summer, which saw them playing a range of shows - everything from a small club show to a larger outdoor festival - in four different cities.

"The Chinese thing was kind of a wild way to showcase the songs for the first time and (the opportunity) came out of, actually, a Victoria company that's just trying to build relationships with the Chinese music industry," Kittredge explained.

The follow-up to their 2006 Juno-nominated Bridges , this latest album couples strong, impassioned lyrics with atmospheric music and a psychedelic-infused style of rock. They even managed to secure the help of a well-known industry figure on the production side of things, working with the leader singer from 54.40, Neil Osborne, and recording from a remote location on Hornby Island.

To say this Victoria-based quintet is tech-friendly is a bit of an understatement. They actually strive to be on the cutting edge of the music industry's digital age, garnering attention in 2006 by developing a voluntary download and purchase model off their own website - almost a year before Radiohead popularized the model with the release of In Rainbows . Oh, and they're also in the process of developing an all-Mandarin version of their website.

This time around for No Nations , they've opted to release their album on CD, vinyl and digital at the same time, while switching to the Creative Commons movement rather than repeating the voluntary purchase approach.

"Basically, it's a whole new concept... it's something that we think is going to catch on, in that it will just alleviate a lot of the wrong accusations of companies attacking the little guy over the use of intellectual property," Kittredge said. "So you see that 'CC' there, and you, as an individual go, 'okay, this writer or artist or painter has granted me the rights to use this material as long as I'm not going to get monetary gains from this material.'"

In early June, the group had the chance to play at the Bonnaroo festival that takes place in Manchester, Tennessee each summer. The experience, Kittredge said, was  "incredible." They arrived on-site the first night of the festival and met with a torrential downpour, complete with thunder and lightning.

"We woke up to sunny skies and everything was kind of calm again," he recalled. "We went out to the festival and we didn't play until about 8:30 in the evening and it was hot - really hot - and essentially, with 80,000 people plus, it was full of crazy individuals - creatures everywhere."

Surrounded by naked and body-painted music lovers, they played a set at the same timeslot as the Beastie Boys, who were playing on the main stage. But they eventually won the crowd over, drawing a few hundred people to the secondary stage to check out their sound.

"It's definitely the closest thing I can imagine coming to Woodstock," he said.

While they've been hard at work in the studio as of late, it's clear that Jets Overhead thrives on stage. To date, they've toured with the likes of Sam Roberts, The Dears, The Stills and Our Lady Peace, and this coming week, they're set to take the stage at the GLC.