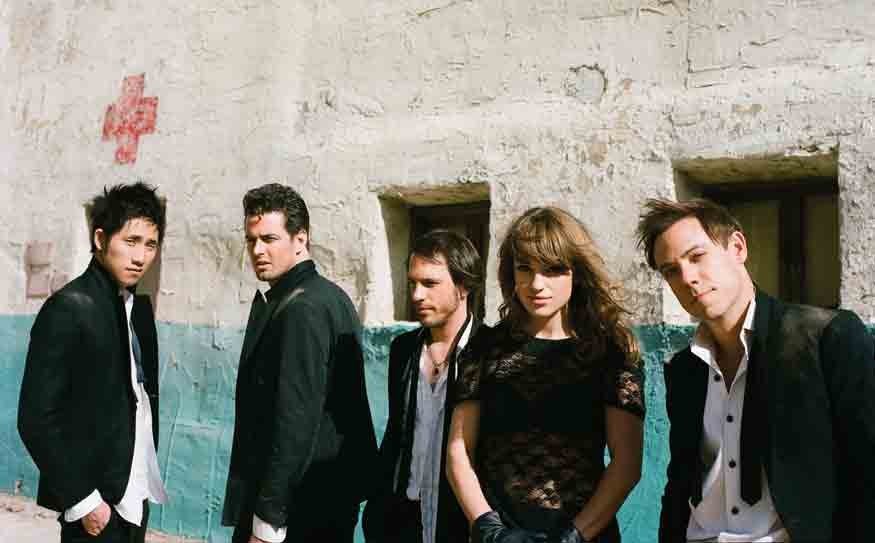 Mike Jollett admits it. His brain has turned to "mush."

After three intense weeks in Nashville, recording his third album, The Airborne Toxic Event frontman has returned to Los Angeles for some much-needed down time.

Of the new album, he says the songs were recorded live off the floor — a departure from 2011's All At Once — and that he has no idea when it will be released. And that's all he says, sorry to say... except that, well, recording has been...complicated.

"(Recording) is fun in the way that when you're recording something and you're really, really engaged with it and you wake up the next morning and you're like, 'Holy shit! How did I get my brain to the point where I was able to do that?'" Jollett says with a laugh.

"It's only through repetition and endless hours of doing something. Fun is the wrong word. It's like all-encompassing and sort of all consuming, and in that way I guess it's inspiring."

It all comes with the territory. With two albums and a slew of online hype — especially in the early days — TATE has been an indie-rock favourite for people who normally don't like indie rock. They've taken the beloved orchestral aspects of Arcade Fire, sanded down Modest Mouses's rougher edges and thrown in some clever insights into the human condition, concocting a palatable brand of indie rock suitable for radio tastes — and that's a great thing, at a time where quality radio rock is about as rare as a Siberian tiger sighting.

What makes it all the more impressive is that TATE — named after a section in Don DeLillo's postmodern masterpiece White Noise — arrived from virtually out of nowhere to find instantaneous fanfare. They formed in October 2006. Less than a month later, they played their first show. By December Rolling Stone, L.A. Weekly and other mainstream media were touting them as rising stars.

They released their self-titled debut in 2007, to mostly positive fanfare. The album shot to number one on Billboard's Heatseekers Albums chart and suddenly, they were a touring rock band — a big one, at that — hitting all the major festivals and the like.

Jollett, it must be noted, had never played in a band before. The new-found success was quite confounding.

"I felt for a long time like a charlatan," Jollett says. "I always thought I was really good at it but maybe it hadn't been my main thing for a long time. But at this point, I've been at it seven years, so I guess I feel like I've paid my dues."

Jollett, a thoughtful and conversational interview subject, talks about his craft in terms of "reaching out," as if the music is merely a vehicle for Jollett — a professional writer before founding TATE — to transmit his ideas to the largest audience possible. In his mind, music is an instrument for emotional connection — the artistic equivalent of brotherly heart-to-heart.

"Songwriting is a way of reaching out to others. There's something in your mind that you're alone with and, for whatever reason, if you feel that you can express it then you're not alone in it anymore," he says.

"At the other end of things, you hope there's people out there who recognize in that idea something familiar and they too are relieved and somewhat heartened by the fact that other people have had these sort of outspoken thoughts and emotions."

Jollett joined Twitter recently, and over the past month has taken to answering fan questions— everything from advice on how to start a band to what books to read. He says it's merely another way to connect. It's not merely about connecting with "fans" but connecting with humanity in general.

More than anything else TATE has achieved, it's this connection with huge groups of people that gives him the most pride.

"It's been a tremendous, tremendous honour. I have zero jadedness about (playing music). I feel very engaged, I feel lucky, I feel honoured and I just want to live up to it," he says.