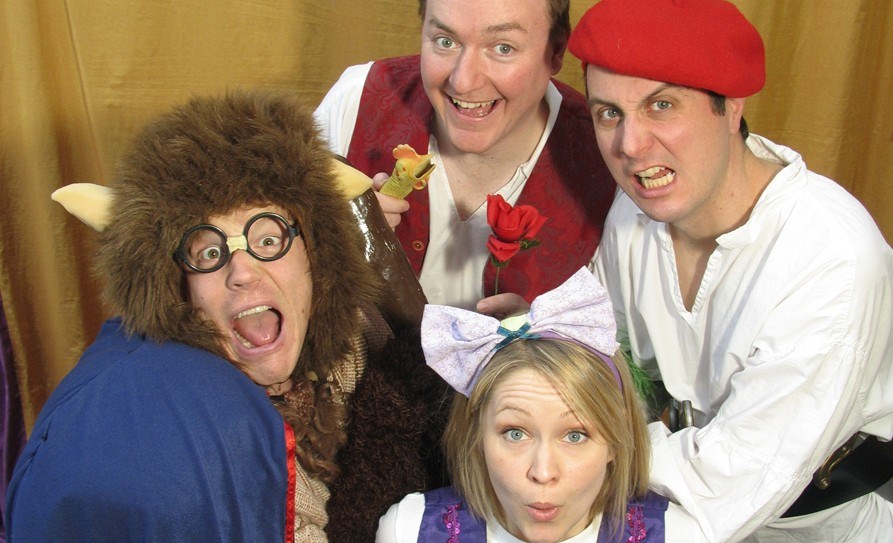 improv theatre DuffleBag Theatre will bring its unique show to Whistler with a bilingual version of Beauty and the Beast . Photo submitted

A DuffleBag Theatre production sounds like it could easily slip into chaos.

The Ontario-based touring theatre company recruits audience members (usually kids) for its shows as actors then incorporates props, elements of improv and, sometimes, more than one language.

"(Actors) don't get chosen ahead of time and there's no rehearsal," he says. "It's a lot of spontaneity and improv on our part."

Beauty and the Beast (a.k.a. La Belle Et La Bete) on May 4 at Millennium Place. While the play pokes fun at the Disney version (with its over-the-top characters like Gaston) of the fairytale a little bit, it combines some of famous version's plot with the more traditional story.

"It's gentle. It's very fun and the beast becomes an adorable character," Lundgren says.

This story begins with a handsome prince who turns away a woman seeking shelter, saying she's too ugly for his lovely castle. The woman turns him into a beast with a curse tied to a rose. If the flower dies before the prince learns to love someone more than he loves himself he will die too. Enter Belle, a beautiful young girl and the fairytale begins to unfold.

"We're very good at improv, but that still doesn't prepare you for everything," Lundgren says. "We try to make sure we have a fun environment on stage. Everyone knows the structure of the fairy tale too. You start with 'once upon a time' and you have to get to 'happily ever after.'"

In this case, you might also learn a little French along the way. Each host — whether it's a school or theatre — chooses from a select group of productions, including a bilingual option. "It's French and English so we have a narrator who speaks both fluently," Lundgren says. "We make sure it doesn't matter what language you speak, you'll understand the show. We make sure everybody gets to enjoy it and we can adjust the level of French based on the audience."

The hope: to expose kids to a new language in a fun way. "We look at it as a fun experience for people that includes both of our official languages," he adds.

While the plays are aimed at a younger crowd, there is content to hold the interest of adults as well. "Usually we get kids that are around four right up to whatever you want to top it out at," Lundgren says. "We have such an appeal that we work for all ages. Kids love us. We have fun doing fairytales and classics, but the parents like us even more. We have an awful lot of humour in there for adults."

They have also managed to appeal to a range of cultures, presenting their play everywhere from south of the border to Singapore, hence their tagline as the "nearly world famous DuffleBag Theatre."

No matter where they travel, though, the goal of their shows is the same: offer kids a new kind of art. "I think the single biggest thing we do is we bring the fairytales and classics to a (group) of people who are always in front of screens," Lundgren says. "They're always watching their videos or iPads or cell phones. To have everyone sit down and have a shared theatre experience and laugh and experience that joy is amazing."

For the actors in the company, touring towns and cities relentlessly can be tiring, but the payoff is rewarding. "When you have 300 kids laughing you love your job and it never feels like work," he says.

Whistler, he adds, is an exciting stop on their spring tour. "We've been to Whistler before and we know that the audiences there are awesome and you get a wonderful mix of people from different countries and places. It's a really fun show for us because the dynamics are always so exciting."