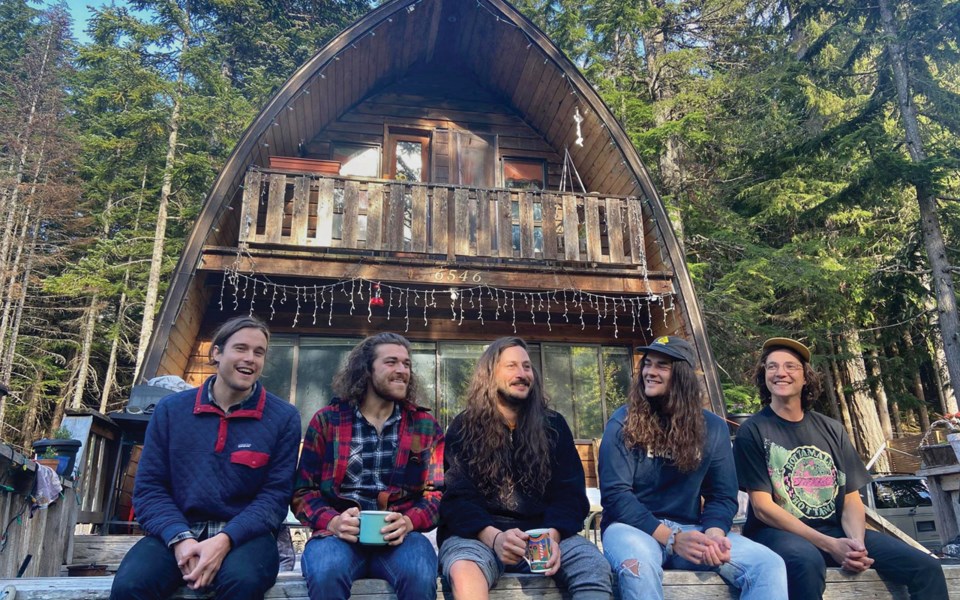 Lazy Ghost are releasing a new EP, Hungover Hopeful, one single at a time. Photo submitted

Lazy Ghost might be keeping their COVID blues in check, but no one would blame them for being disappointed that their summer plans were quashed.

Whistler’s favourite psych-rock five piece was set to embark on a tour that would take them down the coast to California and across Canada when the pandemic hit.

The feeling that they were on the precipice of bigger things was palpable.

“We were going to go live this cruddy rock ‘n’ roll dream and go travel around in our shitty van,” says Jay Booth, guitarist for the band. “Things are still OK—we get to live in Whistler—but it was really sad.”

The band spent the first month of lockdown not doing much of anything musical. “Nobody wanted to meet—you weren’t supposed to or allowed to,” Booth says. “There were five of us in a band and we were like, ‘See you in a month or so.’”

But as the new reality settled in, they decided they needed to get out of their respective homes and make something new.

The result is Hungover Hopeful, a new six-song EP written and recorded in their 4.5-metre-by-4.5-metre shed.

“It was relatively quick, but it was because we could spend so much time together,” Booth explains. “We can all sit together in the shed for six or eight hours and baby the songs and try to get good ideas out.”

Since a big, blowout release party isn’t in the cards, (they’ve cultivated a local reputation for some wild, usually-sold-out shows) the band has been releasing one single a week every Friday with three out at press time.

All possess the same loose, jangly, surf vibe that gained the group favour, but “Like You,” wades into reggae grooves, “Beach Bod,” offers tongue-in-cheek lyrics mixed with melodic garage-rock, and the title track, “Hungover Hopeful,” slowly builds to a chant-worthy chorus tailor-made for crowds packed shoulder-to-shoulder to sway and sing along to (when better times are here again).

“I think it’s going well. I truly hope people are really liking it. If they don’t like, there’s not much we can do about it. It’s what we’re doing,” Booth laughs.

They have had one gig since B.C. entered Phase 3—complete with plexiglass around the band and strict orders for the crowd not to dance. It was, of course, a tough order to enforce.

“It seems like even playing small shows for us is really difficult,” he says.

Instead, their next gig is a virtual one. They’ve been selected as an emerging band to participate in a new program called First Up with RBCxMusic. Run by RBC, it offers a $1,000 stipend, promo support, and networking opportunities to select Canadian bands.

On top of that, since June 25, they’ve been showcasing recorded, 30-minute performances on participating bands’ Instagrams with promotional support at instagram.com/rbcxmusic.

For the session, Booth and singer Kyle Leeming sat on a porch and played three pared-down songs. “It’s a different setting than the manic shows we used to put on,” he says. “People are usually drinking out of their boots at our shows.”

With any luck, the boot guzzling will be back soon.

“I miss it,” Booth says of performing for a live audience. “I’m not a big partier other than that, but it’s so much fun to see everybody let loose and have a good time.”

Check out their new singles on Spotify, or wherever you stream music.