Anthill Film’s Follow Me gets back to the basics of mountain biking: pure fun
Apr 16, 2010 7:36 AM By: Holly Fraughton 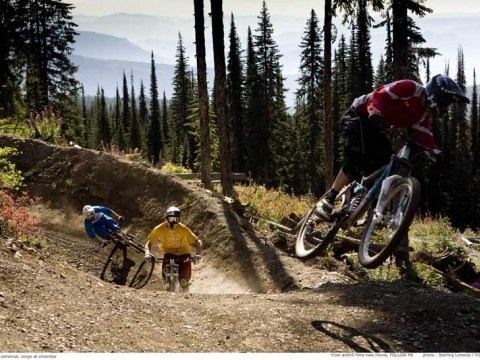 Standing at the top of a trail, one mountain biker shouts "follow me," his cry muffled by a full-face helmet while his friends nod and get ready to drop in.

It's a familiar scene that plays out in the bike park and on trails throughout Whistler, as riders head into the great outdoors to soak up the beauty of B.C.'s bounty and seek their next big thrill.

"It's a pretty cool thing," said Darcy Wittenburg. "When you're going down a trail, there's only one line, right, so you really have to follow your friend and if they kind of go off of something too fast or too slow, or whatever," he trailed off.

"It's one of those things, you're really riding together, and riding along is something that everyone does, as well, but it's a different experience."

Wittenburg is one of the many creative minds working behind the scenes of Anthill Films, formerly known as The Collective. They're the same guys that brought us the mountain bike flicks Roam and last year, Seasons , which showcased all four seasons of the sport, including the so-called "off season."

After Seasons , Wittenburg's partner at The Collective, Jamie Hussain, decided it was time to go back to school, so the rest of the crew got together to start a whole new project, dubbed Anthill Films, that they all had a stake in. Now, the crew - Wittenburg, Darren McCullough, Colin Jones, Jonathon Schramm, Ian Dunn and Sterling Lorence - are working collaboratively towards their common goal: to make badass bike films.

"If you look at the credits, there's at least a hundred names there and it really is that; everybody is working towards this common goal and that's kind of where the Anthill name came from."

Just in time for the Telus World Ski and Snowboard Festival, the Anthill crew is ready to unleash their first creation, Follow Me , to the public.

"That's what the sport is really all about," Wittenburg explained. "So we wanted to translate that onto the screen and try to represent a feeling that most people experience when they ride."

It's a concept that resonates with any level of biker, and one that we caught a glimpse of on The Collective's last project.

"The final segment of Seasons is the Whistler Bike Park and we have all the riders in the film riding together, and we had a lot of positive feedback on that segment," Wittenburg said.

To feature a wide range of terrain and scenery, riders and crew members traveled to Oregon, New Zealand, the North Shore and of course, right here in Sea to Sky country, to shoot. Three riders, four filmmakers and a photographer even make the trek to Northern Baja California, Mexico, to a little-known spot called Punta San Carlos, where they stayed at a remote surf camp while filming lines in the surrounding desert backcountry. The film also features an entire segment on B.C. bike parks, with the crew traveling to Silver Star, Mt. Washington, Sun Peaks and Whistler.

Follow Me makes its world premiere at the Sea Otter Festival in Monteray, California on Friday, April 16, then plays to a home crowd here in Whistler at the Telus World Ski and Snowboard Festival.

"There's such a huge biking community in Whistler and a lot of the people that you see in the bike park every day are a little bit hidden in the winter. And for us, every time we've done a premiere its like a huge reunion," Wittenburg said.