Let's all take a look at busking, folks

There may be a renewed interest in animating the village but funding will be key
Sep 17, 2010 10:13 AM By: Stephen Smysnuik 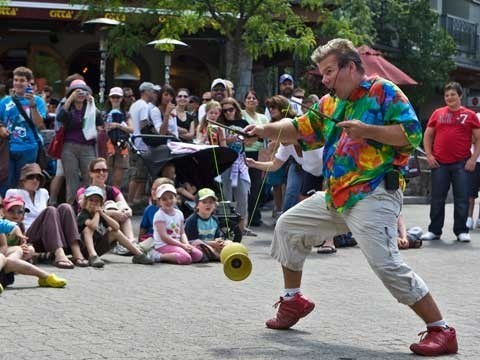 Busking: it'll shake up the village. It'll make it fun and festive, every day and all day... until a reasonable hour! Let's do it! Yeah?

It's a possibility. The need for more village animation is well understood throughout the municipality. Staff is currently composing its Village Animation plan for the 2011 budget year and Councillor Chris Quinlan says busking, the practice of performing in public, might be a part of that.

The question is how a busking program might be facilitated.

"If there's a way that we can get busking so that it's guaranteed to be quality and it operates within guidelines so guests don't feel that they're intimidated or pushed to have that, then that can be integrated with paid performances," Quinlan said. "I think that's really what you want to have. You need more of a hybrid then just one over the other."

Busking is illegal under a 1989 business regulation bylaw, barring the solicitation of business in public places. Council outlawed busking as a means to elevate the visitor experience. They figured that after paying for a flight, a hotel, food and whatever else they need during their stay, there was little point in asking visitors to shell out more cash for street entertainment.

But the Olympics have sparked a hunger within the community for more street entertainment. Those 10 days were the most animated the village has ever been - may ever be - and that raw energy was created by residents and visitors all mixing together in some radical human stew, lubricated with a steady dose of street entertainment.

Busking could be an effective way to bring more entertainment to the village with less cost to the municipality.

"As an idea, it seems to make a lot of sense. Why not just have buskers that are free?" said Mike Kirkegaard, manager of resort planning for the Resort Municipality of Whistler (RMOW). "But there are definite concerns about that over how aggressive they can be and how you maintain some quality and control over that."

In New York, Toronto and Vancouver, where busking is regulated, there's a call for entry, an audition process, the performers are licensed and away they go. Doti Niedermayer, executive director of the Whistler Arts Council, says Whistler could follow Vancouver's example by limiting the number of buskers on a street and making sure they have their permits visible at all times while performing. Vancouver charges $39 (tax included) for a four-month permit and $115.73 for an annual permit. The program pays for itself through these permits.

Currently, the Whistler Arts Council has a $100,000 budget for programming - a pittance for hiring high quality entertainment on a consistent basis. Niedermayer said that a busking program would enable more village entertainment because it wouldn't be so dependent on a budget.

"If there was any expansion of that program in anyway, whatsoever, whether it be busking or more money, we're all for it. We think having arts in the streets, it adds a lot of energy to people who are wandering the village," Niedermayer said.

"We don't lock into one thing forever," said Bob Andrea, manager of village animation. "We have continuously reviewed with the community and council whether or not we should change. Right now, up until this point, every time we have touched base, they've said, 'we like what we have.'"

The RMOW created the Whistler Street Entertainment program the year busking was outlawed. Tourism Whistler looked after programming and they had $300,000 per year to run it. Throughout the 1990s, the village had performers from all over the world every day of the week throughout the summer. By all accounts, it was something to behold.

Over the years, Tourism Whistler put more money toward marketing and funding for street entertainment program dwindled. Less money meant fewer performances. The RMOW took the program over and three years ago the arts council took over all programming duties with a $100,000 budget.

During that time, a number of performers have expressed interest in busking but because of its illegality, the arts council hasn't pursued it. Niedermayer says they have talked with the municipality at various points about changing the law but from what she gathered from those talks, it wasn't a concept open to change.

And it's true - no one wants to hear some longhair with an amplified acoustic guitar playing the intro to Wish You Were Here over and over. But if a busking program is done right, so that it ensures quality and professional programming, it has the potential to elevate the visitor and resident experience way beyond what is currently being offered.

There's a magic in the spontaneity of street performance that can tie a person to that specific moment in time. As a young woman in Paris, Niedermayer couldn't afford most cultural performances, so most of what she experienced was in the street. These were high quality performances that elevated her concept of Paris and have stayed with her ever since. This happens in New York and Barcelona and any major tourist destination where people come back from and say, "Yeah, that place is cool" because of it. This is what Whistler is missing.

"If we get funding and there's enough, we're going to look into a robust animation program," Andrea says. "That is our intention but for us to come out and make it look like it's going happen, we can't say that at this point."

Much of it is contingent on how much provincial money the municipality will receive. The street entertainment program has been funded through the hotel tax, but since the HST has been introduced no one is certain what will happen, though Councillor Quinlan says they should be receiving the same amount of money.

Whatever the case, something must be done. The whistling breeze is simply too boring to bear. Busking!