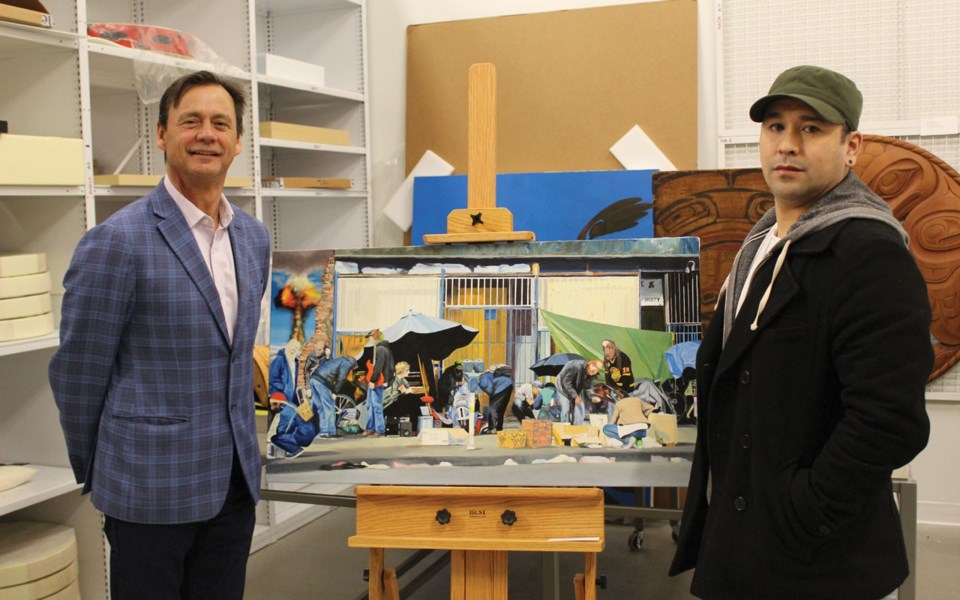 Curtis Collins, left, executive director and chief curator at the Audain Art Museum, poses for a photo with artist Levi Nelson and his painting, Nations in an Urban Landscape. The museum recently purchased the painting for its permanent collection. Photo submitted

His oil painting, Nations in an Urban Landscape, is only the second contemporary acquisition to be made under the auspices of Curtis Collins, executive director and chief curator of the museum.

"I feel extremely privileged," Nelson says. "When you look at the collection, all the different Northwest Coast nations that live here at the museum, now they have a piece from the Lil'wat Nation. It's fitting."

Last year, Nelson contacted Collins to say he had two paintings he thought might be a good fit for the museum. While that didn't pan out, Collins was impressed with the work and encouraged him to apply for the museum's emerging artist program.

"Then we just talked about anything else the museum could do for [him], like to start coming in and drawing," Collins says. "So Levi came in a few Tuesdays when we're closed just to sit in the first space [the Chrystal Gallery] and draw. We just set that up informally."

Nelson, who's currently in his final year of school at Emily Carr University of Art + Design, chose that gallery because it's filled with Indigenous masks from as far back as the 1800s.

"It felt like a real privilege to have the space to myself, but also to sit amongst these ancient artifacts that belonged to and were carved by artists 100 years, 200 years ago," Nelson says.

Ultimately, he ended up incorporating masks from that room into Nations in an Urban Landscape. The painting depicts a crowded Downtown Eastside street with three masks from the collection, as well as a bentwood box, a basket from the Lil'wat Nation that's in the Museum of Anthropology, and another basket based on one made by his grandma, a master basket weaver for the Lil'wat Nation, all tucked into the scene.

"I came up with this idea of wanting to give identity to First Nations people who are marginalized in the Downtown Eastside, just to showcase that Indigenous people who are down in that area come from really strong cultural backgrounds still," he says.

When Collins saw the piece at the launch for Nelson's solo show, After the Blast, which took place at the Maury Young Arts Centre last December, he was immediately drawn to it.

"From my perspective as a director, this work makes sense," Collins says. "The fact that it's got this relationship to this historic work also gives a greater relevance to our collection."

After approval from the acquisition board, and funds donated by the Bruno family, they purchased the painting.

"We have our acquisitions committee meeting four times a year and some things are approved and other things get declined," Collins says. "It's not automatic. I was a little bit nervous because this was such a bold move with a young artist, but I thought it was a worthwhile effort."

"I get to take my place among these artists I've admired since discovering them in art school," Nelson says. "It's super cool. It's dreams coming true."