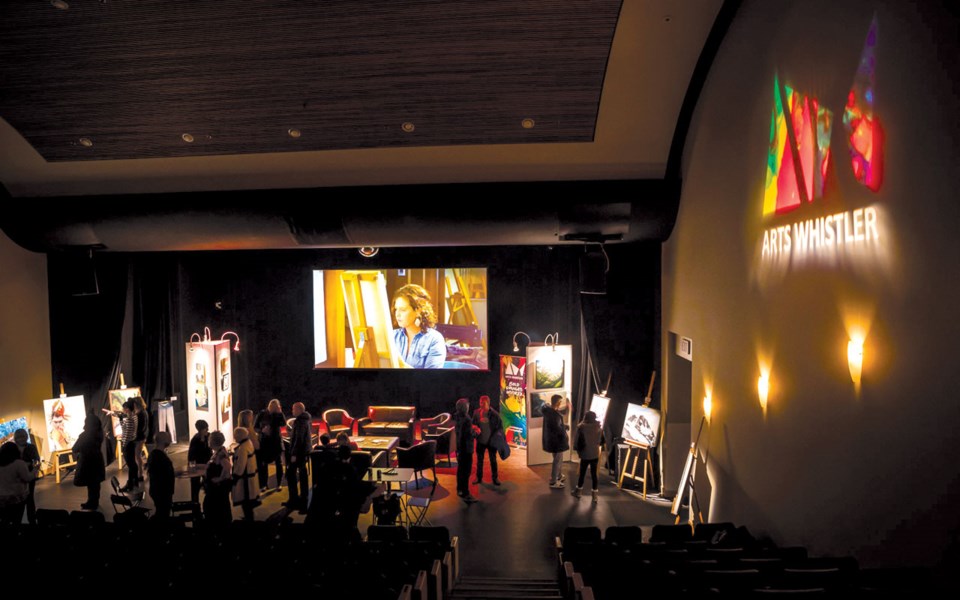 The theatre in the Maury Young Arts Centre might have been a hub for in-person performances before COVID-19, but now Arts Whistler is turning it into a livestreaming base. Photo by Justa Jeskova

Arts Whistler is preparing to transform its theatre into a studio in preparation for ongoing physical-distancing restrictions.

The organization is hoping to have three to four cameras installed in the Maury Young Arts Centre’s theatre by September in order to host high-quality livestream arts events and performances in the fall.

“We’ll work to do what we can in person, but this allows for more consistency of programs,” says Mo Douglas, executive director at Arts Whistler. “This is the focus for the next six to 12 months until we’re in a position to do live stuff in the theatre. [Livestreaming] might still have a role once we’re back.”

The new setup—which also includes adjusting the theatre lighting to make it more conducive to studio lighting—was made possible thanks to a combination of grants and shuffling funding that was originally allocated for in-person events.

“We have some program grants allowing us the opportunity to do this,” Douglas adds.

While programming plans are still underway, Douglas says the first production livestreamed from the revamped space will likely be a variety show featuring all kinds of local talent.

That could then serve as a testing ground to see what kind of entertainment could get its own show.

“We want this to be local and relevant,” Douglas says. “That’s what will make it different. There’s a lot of streaming stuff out there, but we’ll have some fun with the eccentricities of Sea to Sky and Whistler as well.”

There is a possibility that the Hear and Now music festival could become the debut streaming event from the theatre in September if restrictions prevent it from taking place outside in the village.

“If health conditions allow, it might be at [Whistler Olympic Plaza],” Douglas says. “If not, we can bring it into the theatre and shoot it more as a series where we spend a little more time with each band. It would be a great opportunity for the local music scene.”

Eventually, Douglas also envisions streaming in musicians from across Canada as well.

“We thought it would be fun, once we get local stuff under out belt, to bring in songwriters from further afield,” she adds. “We could do a songwriter exchange with a musician in, say, Lunenburg, Nova Scotia … Whistler is such a magnet for people across the country. Canada is a small country. Connections get made.”

The new space will build on the experience Arts Whistler gained hosting the Bike Shop Sessions with concerts streamed from Coastal Culture in May and June.

“That team did an amazing job and it was a learning curve,” Douglas says.

“What they learned is how affordable some of the technology is now. (And) to make a live show dynamic, how many cameras do you need? We went from two cameras to three. It really makes that performance way more dynamic. The musicians understand which camera is live and play to that camera. Being able to change the angles and for the audience to get a different perspective really does change how you perceive the show. We did learn a lot.”

Meanwhile, Arts Whistler also plans to connect with other local arts organizations to see if they have ideas for the space as well. (It will also benefit the Resort Municipality of Whistler council when it resumes in-person council meetings in the space.)

“We’ll be the guinea pig, so to speak, and reach out to colleagues as we get it running,” Douglas says. “It’s an opportunity for folks to do programs and share information through this medium as well.”