Living in their own Time Zone 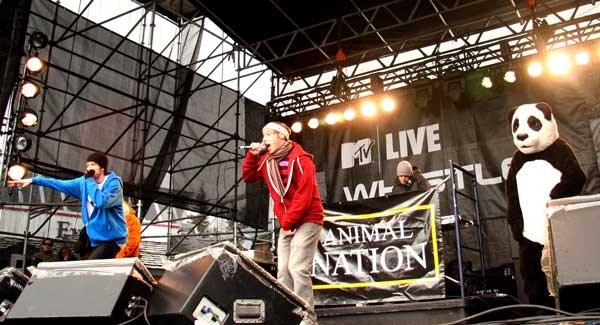 The local duo was worn out from a wild night out, the first in months. The hip hop twosome have been hard at work on their new album on Rallytime Records since August, the second album in Animal Nation’s two-year career.

Big ambitions for the recognizable chilled out hip hop vibe the West Coast is famous for. The roommate team of Steige Turner and Mike Armitage is fast tracking their dreams. Not this morning mind you, but a few mug fulls of java ticked the Time Zone story forward.

Since the release of Animal Nation’s self-titled debut album last year, the boys set out two goals for themselves: a new album backed by a record label and stepping up to the Telus World Ski and Snowboard Festival mainstage.

Done and done. The boys word-played into the opening act for Canadian legend Buck 65 at the April festival, summoning crowds out into the rain with their poetic rollings about life, imagination and burnt lasagna.

Music worth proven, the pair wrapped up the new album earlier this month. They’ll give a sneak preview at the Classified show on Monday, June 18 at Garfinkel’s, followed by a Whistler launch Friday, June 22 at Moe Joe’s. Already tracks are riding radio waves across Canada and New York, and the album was launched in Vancouver earlier this month.

Not that these best friends are bragging.

They deliver news straight up in between jokes and Armitage’s reflection on the corn beef benny being a little too big. While the toque and hoodie toating hip hopper may not fit the foodie mold, he talks about his breakfast with as much interest as his music — he is, after all, the cheese trolley expert at the Bearfoot Bistro.

Tongue in cheek, passionate and sincere, all of these complex personal makeup makings translate into an album that covers the map, musically and geographically.

For the first time, Animal Nation left the album beats to global talent, hence the name, with beats from Scamp, Pablie, Invisible Think, Hunchback and Monkey Reiling e-mailed in from every corner of the earth.

Time Zone tracks roll out with listening ease, each track in the book cover notes the time zone from whence it came along with a personal anecdote followed by lyrics that let you read into the Animal Nation mindset even before listening to it.

The track Two dana dana bo bana banana nana’s its way through the Animal Nation name, acquainting listener with the two, the pair, and the “two sides of every story” and their love affair with hip hop:

“And hip hop I love you and I hate to have to tell you that you’re losing appeal to me ‘cause most of rap is whack, but I’ll be the bearer of good news too so I’ll never leave the studio until I bring you back.”

The solemn pledge carries on with sensitive reflections and mindful insight through tracks I Never Cared (About the Troubles) and Time, each digging into life to find freedom, understanding and truth:

“Open your mind, days don’t count when you’re counting the days. We’re living in the now make the most of every phase.”

Soul searching edges up to sunnier beats with the playful mischievousness of Summer Kids then Animal Nation opens the floodgates on their cheeky humour with Golden Brown, a recipe of ridiculousness with conversation switching up between a cook and lasagna — the pre-boiled pasta condemning the non-pre-heated oven.

While humour always provokes a smile from the witty lyrics Animal Nation is famous for, the beauty of Midnight Rider brought the album home to Canada’s Pacific Standard Time and this nation’s journey ahead.

“A little further now, just a bit more. We gotta keep on moving, keep improving what we live for. Through the darkness, we change all the lights.

Cause as long as we’re moving then we’re doing alright.”