Local lore takes centre stage in About The Moose 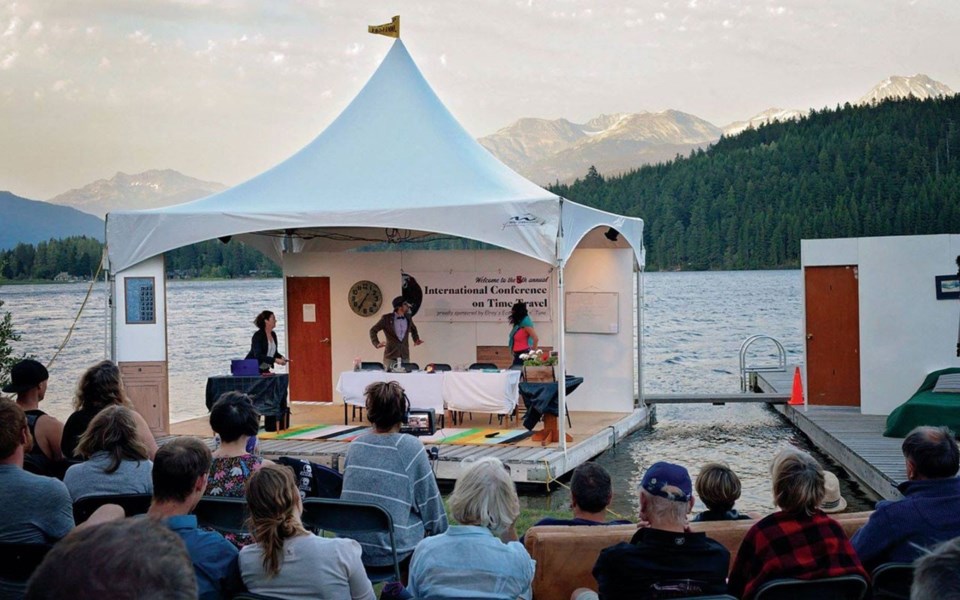 Back in the early ‘80s, a mysterious California man lugging a large cross with a wheel affixed to its bottom showed up in town.

While he was a bit of a spectacle, he wasn’t proselytizing. Rather, he had recently kicked a drug problem, discovered his faith and wanted to quietly celebrate it by hauling the eight-foot-long wooden crucifix from his home state all the way to Alaska.

“He was just filled with his faith and cleaned himself up and wanted to do a pilgrimage,” says Stephen Vogler, artistic director at The Point Artist-Run Centre.

Vogler had this story in the back of his mind when, earlier this year, he decided to incorporate it into a play for The Point’s annual Flagstop Theatre & Arts Festival.

To get the details straight, he sat down with long-time locals Marcel and Joan Richoz, who kindly gave the man a place to stay after Marcel encountered him while working on construction of the Hilton in the village. “So he stayed at their house in Alpine,” Vogler says. “There was a big hubbub in town about this cross. The next day, [Marcel] dropped him off at Village Gate Boulevard [where he had picked him up] because he wanted to start where he left off.”

But that’s not the only local lore About The Moose delves into. The location of the play—which is directed by Angie Nolan and features several local actors—is kept deliberately vague, but it’s also inspired by a moose that temporarily called Whistler home in 2013.

The production, developed as part of the Flagstop Theatre Mentorship program, is set to debut on Aug. 9 on a floating stage outside The Point—weather permitting. “We’re going to be ready for any weather,” Vogler says. “We’ll have a big tent as well on the grass that we could move in to cover the audience.”

After that, the show will tour to Gibsons on Aug. 16 and Powell River on Aug. 17. “It’s quite a crazy undertaking with 13 people,” Vogler adds.

The Flagstop Festival, meanwhile, will also feature comedy, music, dance, and food from Aug. 9 to 11.

Alongside the play, Friday evening will also feature a dance performance by Trish Belsham’s Gruff Goat Dance Theatre, and wrap up with a show by Vancouver band Coal Davie and the Rockabillionaires. Saturday evening, meanwhile, will be focused on comedy with comedian Dino Archie, who splits his time between Vancouver and L.A. and appeared on Jimmy Kimmel Live! in 2016.

“We went big this year with Dino Archie,” Vogler adds. “He’s really great. I really like his stand up. Vancouver TheatreSports will be back again. They’ll do a workshop with our local improvisers in the afternoon.”

That will culminate in an improv show later that evening, followed by a performance by Pemberton country band Marble Canyon.

Finally, Sunday afternoon will feature monologues performed on the floating stage by The Point’s Youth Theatre Mentorship Program, as well as live music and bocce and brunch.

“I’m hoping to sell out both nights and have a good turn out on Sunday,” Vogler says.

Festival passes for the weekend are on sale for $80, which includes two dinners and all of the shows, or $50 for the shows only.