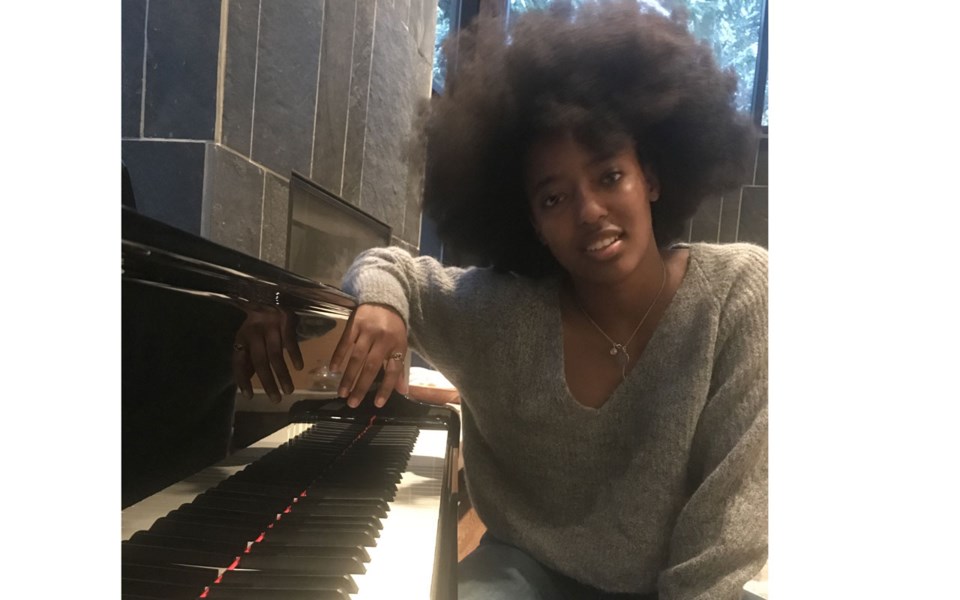 ZADA is set to perform as part of an online charity event for Canadian Humanitarian on Nov. 20. Photo submitted

Like many musicians around the world, Zada Szocs (who goes by the stage name ZADA) has spent her pandemic lockdown wisely.

The 17-year-old Whistlerite is at the tail end of creating her debut EP.

“It’s been great,” she says. “COVID shows you how focused you can be on a project. It shows how people can connect from distances great and far.”

While she doesn’t want to pin herself down to a single genre, ZADA describes her sound as “R&B, neosoul.”

The four-song release, meanwhile, lyrically, tackles everything from female empowerment to the Black Lives Matter movement.

“And then I have a self-discovery song—a normal teenager trying to figure out what’s going on inside their head,” she adds. “[It’s] a lot of personal, looking-into-yourself.”

To help hone her vocal and songwriting skills, ZADA has been working remotely with both a vocal coach in L.A. and with the Songwriting School of Los Angeles.

“What I really learned from working with everyone is looking around you and seeing how you process that and how it comes out on paper,” she says. “How you can make things around you creative … I love music and playing music, but I have an equal amount of passion for writing.”

While ZADA initially started out playing trumpet, it wasn’t long before she found herself drawn to piano instead—now her instrument of choice.

“I didn’t start singing until probably seven years ago. It took me a little bit to get into that,” she adds.

She had a short stint with a girl band in Vancouver, and still plays with another, but more recently decided to break out on her own.

“I’m trying to focus more on being a solo artist, which is where I feel the most free,” she says. “I’ve always wanted to write. Any time I’ve worked with other people, I’ve tried to position myself in the writing position.”

Although she hopes to release a single in December, and the EP possibly in the spring, locals will be able to hear a sampling of those songs—all for a good cause—when ZADA performs at an online charity fundraiser for the organization Canadian Humanitarian on Nov. 20.

The Alberta-based organization has a place in her heart because it helps disadvantaged children in Malawi, Guatemala, and Ethiopia, where she’s originally from. Her family has also been involved with the group for nearly 14 years.

“I have a big connection to Africa, so any time I see something like that where I can represent my country, I like to do it. We go back with my family once in a while,” she says.

The fundraiser—dubbed Hope for Tomorrow—will livestream from her piano and she will sing three or four original songs.

“I’ve done open mics, but no online shows,” ZADA says. “It’s going to be fun. I love the idea that you can connect with more people in a sense.”

Alongside ZADA, singer-songwriter Andrew Allen, who has volunteered with the organization, will also perform.

There will also be door prize draws, a silent and live auction and other fundraising.

“In the past, we’ve worked with them and gone to schools and supplied books,” ZADA says. “They asked me if I wanted to do it and I said, ‘That would be wonderful.’”

The fundraiser takes place online on Friday, Nov. 20 from 6 until 8 p.m. For tickets, visit trellis.org/hope-for-tomorrow.