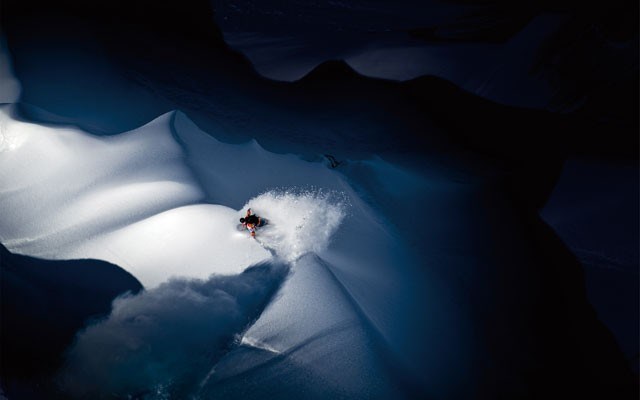 perfect shot Scott Serfas scooped up an award for his photo of Travis Rice at the Red Bull Illume awards in Hong Kong last month. Photo by Scott Serfas

A lot of great photography is about being in the right place at the right time, with just the right light to freeze a moment of time into a piece of art. And while a photographer in a studio can control a lot of those factors when composing a shot, action sports photography is a completely different game — moving targets, changing weather and light conditions, challenging access and angles. But sometimes everything comes together and you end up with a shot that's truly great.

That kind of luck had a little to do with Scott Serfas' award-winning photograph of snowboarder Travis Rice, which placed first in the "Illumination" category at the Red Bull Illume awards in Hong Kong on Aug. 29.

Illume is like the Olympics for action sports photography with awards every three years. This time around, judges narrowed down the winners from a selection of some 38,000 action and adventure sport shots.

"(The winning shot) was from a trip I did to Alaska to film the Art of Flight movie," says Serfas. "We were there for a month, and it started off kind of slow because we spent the first seven to 10 days stuck in the cabin wondering when the clouds were going to leave... We really had no idea what we were getting into, but it turned into by far the best trip of my life."

Serfas took all kinds of pictures that you might have seen in snowboard magazines promoting the video and its stars, Travis Rice, John Jackson, David Carrier Porcheron, Scotty Lago, Jeremy Jones, Nicolas Müller, Jake Blauvelt and others. But the winning shot, the one he wanted from the start, took until the last day of shooting to put together.

"The whole time I wanted to shoot from the helicopter, but we never got around to doing it" he recalls. "The Cineflex camera was around shooting all the time and to put another helicopter in the air would have slowed things down... But for the last day we worked out a flight pattern where I could sit and shoot out of one helicopter while the other helicopter flew around us. It was late in the day, Travis Rice was dropping in and we hovered above him and followed him, and I managed a few snaps on the way down — and I didn't really know what I had until I got back."

In the end Serfas submitted 20 shots to Red Bull Illume, and when the field was narrowed down to the top 250 some five of his pictures had made the cut.

"All I knew from that point is that I'd probably have at least one photo in the top 50, but things just got progressively better and better," he says. "It was pretty surreal. When they announced I had won that category, I was just speechless. I'd been told that it's arguably the hardest category to win and the one that most people go for. They describe it as 'show us what you've got,' and that means everybody's best photo, so it was definitely an honour to win."

The other Serfas shot that made the top 50 was a sequence shot of John Jackson from the same trip.

Serfas said the win was a highlight of a career that spans more than two decades. The prizes were cool — including a six-kilogram glass trophy and high-end photography gear — but it was the recognition, and the opportunity to rub shoulders with top action sports photographers that made the trip priceless.

Serfas's beginnings were considerably more humble, starting as a high schooler snapping shots of his friends while snowboarding around Whistler and the Lower Mainland. He never dreamed it would become his career.

"It was a hobby for me, and the idea of it becoming a profession never crossed my mind," he says. "Then in the early '90s snowboarding started to get a little bit bigger and there was a brand in Vancouver called Never Board. They later became Option, but at the time they told me that if I had taken a few of my pictures on slide film they would buy a few shots from me and put them in their catalogue.

"My first question was, 'what's slide film?' because I was just buying the regular cheap stuff at the drug store. So I started buying slide film and it took me a while to figure out how to shoot it and expose it properly, but a few months later I had an ad in Transworld Snowboarding with Never Board, and shots for their catalogue."

That was in 1992, and things started to pick up from there. Serfas also started shooting for Vancouver-based Concrete Powder magazine, which he says helped to launch his career long before the big magazines knew his name.

Serfas is based in Vancouver, but has spent a lot of time living in Whistler over the years. At one point he was living in his van in the underground at the Whistler Conference Centre on weekends, something he managed to get away with for months before he was noticed and kicked out.

"It was always from Friday after school until Sunday night, eating canned beans and Ramen noodles," he says. "It was all about being a bum back then, because I spent all my money on a season's pass."

Serfas has branched out from snowboarding to shoot other sports as well, notably surfing, skateboarding and mountain biking. He's already bagged one mountain bike shot he plans to enter in the next Red Bull Illume in 2016 — a shot of Whistler's Brandon Semenuk.

To look at other finalists and award winners from Red Bull Illume, visit RedBullIllume.com.