Madchild: not so mad after all 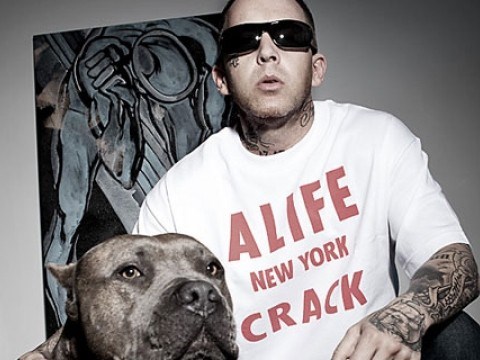 Madchild's back, but not back just putting out records. He's, like, back. Now sober, he's the creative and disciplined artist he was 10 years ago, before the fame, the gangs and the drugs.

He's making up for the time he lost addicted to painkillers, devoting each day to writing and recording new material. He's released one EP , Banned From America , and a mixtape M.A.D.E, which he is currently supporting on tour, with more new music on the way.

"I feel like I kind of wasted four years of my life - not kind of, I did - and now I'm trying to make every day count for four days," he says.

Madchild, born Shane Bunting, rose to prominence in Swollen Members. They were Canadian mainstays for the first third of the 2000s, perhaps best known for Madchild's nasal delivery.

After a string of successful singles and cross-Canada tours, Madchild's well-documented affiliation with the Hell's Angels (and the inclusion of patched members appearing in Swollen Members music videos) lead to Nettwerk Management dropping the group from their roster.

That incident, paired with the commercial flop of 2006's Black Magic , led Madchild into a depression he masked with painkillers. His creativity floundered. His career stalled. He lost everything - his cars, his 11 properties. All told, he says the addiction cost him $3 million.

He's been sober for just over a year but the first few months were anything but sunshine and rainbows.

"Coming out of your addiction, instead of being like 'Woo-hoo! I'm sober this is great,' you're like, 'Oh, this is the reality that I've created for myself,'" he says. "It took me to a very, very dark place. I was straight up suicidal a year and a half ago."

He threw himself into writing new material. The music became his therapy. Each verse from his recent releases is a heaving of troubling emotions, expelling every awful feeling that he had pent up throughout his drug addiction.

Paired together, Banned From America and M.A.D.E. (an acronym for Misguided Angel Destroys Everything ), are like two chapters of a book documenting the life of a battered Shane Bunting, who was once riding the crest of success, and now bleeding before a world that is forcing him to confront the pain he'd been masking with pills and cocaine.

In real life, though, Madchild has found the perspective he's needed to put the past behind him and move on. He's happy to have been given another chance - not just at music, but at life.

"The last eight months have been amazing, dude," he says. "It's so rewarding. It's like I wish I could just grab people and let them see inside my head so they could see that once you get past the hard part (of recovery), how rewarding it is, how good God is, how good life is, how many rewards there are on a daily basis."

He's candid about his former gang affiliations and the hassles it has caused for him. Banned From America was written in the six days after he was barred from entering the U.S. because of his Hell's Angels connections. The event made national headlines.

Last week, Abbotsford RCMP shut down his scheduled gig over fears that the show would be a magnet for criminal activity and, in light of the recent shootings in and around the area, they didn't want to take any chances.

"It was for entertainment facto," he continues, "but let's be honest. I was still glorifying a certain aspect of life and maybe I overdid it a little bit. Maybe it wasn't appropriate and I let it out, like I say now. I think I can have the same edge and still be the same crazy Madchild."

He's taken on a role-model approach to his younger fan base, working with high school liaison officers to share with students his experiences with gangs as a way to "shed some light on things."

"I know that I can relate to them more than some tactics that are made right now to try to steer kids in the right direction. I just feel like I might be able to have more of a heart to heart with kids or young adults and it might sink in a little deeper because I went in one end of the whole thing and came out the other end," he says.

But first comes his work. He's speaking to Pique from the set of an Edmonton video shoot, one of seven he has yet to release. He has enough songs for another EP and another mixtape. His debut full-length, Dopesick, is also ready for release but he says nobody will hear it until he's built enough hype for himself that people beyond the Swollen Members fan base will want to hear it.

"( Dopesick ) is not going to be an explosive impact," he says. "Let's be honest. I'm not at that point in my career. Even though I'm a veteran in the game, I'm a new artist. I'm a brand new artist. I've only been a solo artist for 10 or 11 months as far as the public is concerned."

So he's going to work this second chance the best that he can. He's going to keep writing and play shows until he can't take it anymore, and then write some more. With four years wasted, it seems he'll stop at nothing to get back on top. And he has the confidence that might just take him there.

"I don't think that a lot of people have my work ethic right now," he says. "I don't think a lot of people are messing with me, lyrically, song-wise. This is my whole life. I'm putting everything, my heart and soul, into this so I don't want it to just come out and have nobody know about it."