Marching to their own beat 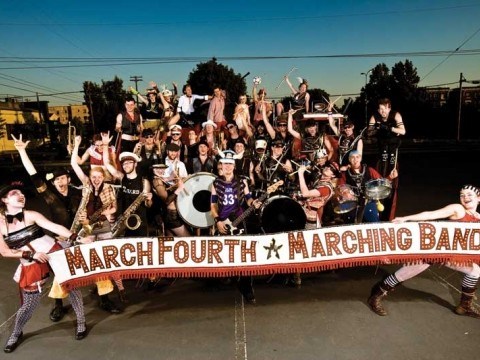 As anyone who was in Whistler during the Olympics can tell you, there's just something about a big, old-fashioned marching band that draws a crowd. In the case of the March Fourth Marching Band, it may be the fire-dancing stilt walkers, or costumed fire-eaters, flag twirlers, Vaudeville dancers, clowns or acrobats that immediately command the attention of the masses.

Or maybe they're drawn by the music.

Either way, March Fourth Marching Band - which is affectionately called M4 by its true fans - definitely isn't your average marching band. No, this massive musical ensemble has put a fresh, modern twist on the era of big bands, creating a throwback to a culture which isn't exactly mainstream today.

John Averill is bass player and bandleader for M4, which got its name from the date of their first show: March 4, 2003.

The group's roots stretch back to the infamous Burning Man Festival in Black Rock, Nevada. Averill attended the event one year and was inspired by the fun-loving atmosphere that fuels the event, year after year. He returned to Portland, Oregon and started hosting his own underground parties with the same feel-good vibe. Soon, he was putting together an impromptu marching band to play at a Fat Tuesday Mardi Gras party; assembling a group of performers and musicians to play a seven-song set of Rebirth Brass Band, Fela Kuti and Fleetwood Mac covers. They were a smash hit and M4 was born.

"I'm not sure why we connect," Averill reflected. "I think it's just an explosion of energy!

"Managing this band is more like managing a sports team than it is a band. With the exception of the bass, we can switch up a lot of the different instruments," he added. "No two shows are ever the same."

This mobile big band can feature saxophones, trombones, trumpets and drums, which are all anchored by a battery-powered electric bass. Musically, they draw inspiration from a wide range of global influences, including Eastern European gypsy brass, samba, funk, afro-beat, big-band, jazz and rock.

The group performs all original material, with individual members writing independently and bringing tunes back to the group to rehearse, perfect and perform.

Working with such a large group of multi-talented artists over seven years, there have definitely been a few changes in the "team roster."

"The cool thing is that a lot of these people that used to play with us are still available as substitutes and things like that," he said.

The entire percussion section is very Latin-influenced, while the horns come from reggae, funk, jazz or big band backgrounds. On the whole, their sound is built on an instrumental foundation of percussion, brass and then bass. Lately, however, they've found themselves incorporating more and more vocals and guitars into the mix.

"So it's really starting to sound more and more like some alternative big bands," Averill said. "The thing I like, as far as songwriting goes, is that we can pretty much cover any genre of music that we want and still sound like us, which I find really fascinating."

Rather than identify with and confine themselves to any one genre, they've become almost like musical chameleons, exploring and assuming new musical identities.

"The interesting thing is, we haven't really gotten into collaborative songwriting, where a few different composers get together and create songs, and I think that's sort of the next step in our evolution," Averill said.

While the musical ensemble is clearly a huge part of their performance, a large aspect is visual spectacle. The band comes to the stage armed to the teeth with not only instruments but a gaggle of stilt-walking, dancing and Vaudevillian performers, all ready to wow the crowds with their antics.

"It's sort of like a team, in a certain sense," Averill explained. "We have a roster of probably 35 people, but we do a big anniversary show on March 4, and that's pretty much the only time of year where everybody comes out as sort of like the big, giant, over-the-top thing."

March Fourth has played shows with the likes of Fleetwood Mac, No Doubt, KISS, Blink 182, Galactic, the Neville Brothers and Antibalas, but they've only recently signed with an agency. They've also started garnering a lot more attention from the press and public, booking a wide range of festivals.

Last November, the band released their very first studio project, Rise Up , a full-length collection of the band's best compositions from the past three years. It's impossible to capture the essence of M4's live shows in a recording, but as Averill explains it, the goal is to have their music stand out alone, without the visual spectacle.

"Our second and third records are live records, where we try to give the best mix of a live show, and some of the tracks actually do kind of capture the energy. But if you're talking to people in the industry they say, 'if you really want to kind of transcend this thing you're in and become considered a real band, you have to make a record that's not live,'" Averill said.

These days, the band spends a lot of time touring around North America in the 1984 MCI coach they bought off of eBay and converted "Transformer-style" to fit the entire band (around 28 people) comfortably. It's equipped with bunkbeds, Wi-Fi, kitchen and a roof rack.

"It's a big beast to lug around," Averill laughed.

M4 will storm the Main Stage at 7:30 p.m. on Saturday to play the Telus World Ski and Snowboard Festival's kick-off party. The Mutaytor wraps the evening set, afterwards.