Married to the stage 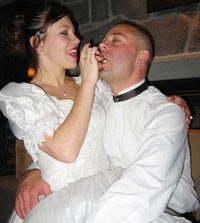 Where: The Westin Resort & Spa

The best weddings are not those refined decorous occasions laid out by the bridal magazine industry. They’re wild and passionate affairs full of incorrigible relatives with admittedly charming quirks. They’re the large, boisterous bashes. A house of cards of music, food, dancing, toasts and embraces all resting precariously on unpredictable human nature. For all the sweetness of watching two starry-eyed youngsters celebrate their love, there is the bittersweet flipside of jealous bridesmaids stuffed into unflattering gowns, tactless groomsmen, inebriated relatives, and the inevitable crash course of ideas when the pious and not-so-pious end up at the same table.

It just takes one of these wine-soaked, jubilant affairs to realize there’s enough human drama and zany comedy there for an entire play, which is likely how, 17 years ago, the idea ended up just that, an off-Broadway show called Tony ’n’ Tina’s Wedding.

An interactive dinner theatre/stage show fusion, each performance recreates a raucous Italian wedding to which audience members are invited guests. In 1995 Michael Fera, a small-time Gabriola Island theatre director and his actress wife Tanja Dixon-Warren, fell in love with the show after catching a TV feature on it and decided to stage it in Vancouver. It was an ambitious project for their meagre resources, and at the time they considered it a three-week blip on their radar. But eight years later, Dixon-Warren and Fera’s Horse Raven Theatre Company is still producing the show in Vancouver and they are the force behind its Whistler debut, a 13-performance run beginning this Monday evening at the Westin Resort & Spa.

Each night festivities kick off with the exchange of vows between Anthony Nunzio, played by Phil Trasolini and Valentina Lynn Vitale played by Cynthia Potvin in the "church-like setting" of the Alpine Ballroom. Guests and cast members then make their way through the receiving line to the reception in the Emerald Ballroom where an Italian buffet dinner created specially for the performance by Westin executive chef Hans Stierli awaits.

From this point on, anything goes. While Dixon-Warren notes there are scripted elements, much of the performance is improvised based on interaction with each audience. Just like at a real wedding, she says, audience members naturally display varying enthusiasm for the proceedings – some preferring to sit back and observe, while others dive in, dancing, embracing and helping the bridesmaids with their hair in the bathroom.

Dixon-Warren says the interactive element can appear intimidating but emphasizes the unique setting allows audience members to simply be themselves.

"Interactive can scare the heck out of people," she says, "but it’s basically going to a wedding so you interact the way you would at any wedding. Some people like to dance, some people don’t."

The other misconception, she notes, is that the performance makes a mockery of Italian weddings and culture, but Dixon-Warren says it’s more of a celebration, confirming it’s akin to the 2002 hit film My Big Fat Greek Wedding.

Of course, true to life, sometimes people don’t behave very lovely and certain characters are known to partake in what she calls "edgy" activities. A mother herself, she maintains the show is suitable for families since the characters are able to use their discretion and are adept at not parading their vices in front of children. Besides, she notes, "Italian weddings aren’t Italian weddings without kids running around and sitting under tables."

It’s the familiarity of the wedding setting that has been the biggest factor in the production’s incredible longevity and continued success says Dixon-Warren.

"The way we’ve chosen to direct it, it’s a celebration of the Italian community and their love of family and of food and of faith. That’s why it’s worked for so long," she says. "People come out feeling very happy and good and have laughed their heads off, and gotten to know a bunch of weird quirky characters. It’s that happy family comfort-level. It’s bizarre because it’s so real.

"Everybody’s been to a wedding where they have a funny story," she adds, "and this is hundreds and hundreds of funny stories in just one night."

Tony ’n’ Tina’s Wedding runs from Monday, Dec. 22 through Saturday, Jan. 3 at the Westin Resort & Spa. Adult tickets are $135 — $150 for regular performances, $160 for Christmas shows and $220 on New Year’s Eve. Christmas and New Year’s include expanded buffets. The New Year’s Eve performance also includes champagne and a countdown to midnight with the cast.