New Whistler website offers a hub of livestream concerts and archived shows
May 14, 2020 2:00 AM By: Alyssa Noel 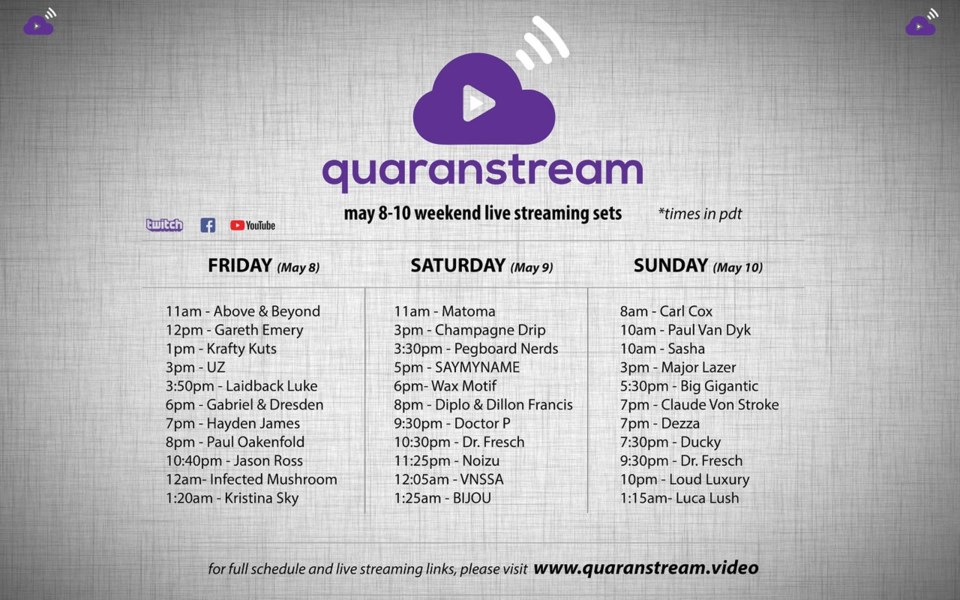 Quaranstream first launched in Whistler as a hub of livestreaming concerts and festivals. Photo submitted

Shortly after the COVID-19 pandemic hit in March, Shane Martz was hunkered down in his Whistler home and decided to tune into a livestream festival hosted by Beatport.

"I watched it with a few of my friends [remotely]," he says. "We were watching it together and chatting about it. I didn't know how enjoyable it was going to be. After it ended, I was like, 'That was a cool experience—watching it remotely with my friends.'"

Of course, it was just the beginning of a massive trend that's seen musicians, bands, and DJs perform for fans around the world via livestream. Martz points to a new study titled "Media and Entertainment in the Time of Coronavirus," which indicates that won't be changing any time soon.

The study found that seven in 10 concert attendees who have tuned into a livestream during quarantine would continue watching even after live music events return.

For his part, after that first show, Martz scoured the internet looking for more online gigs—only he realized they weren't that easy to find and, as they proliferated, they were harder to keep track of.

"You have to follow them all on their individual social media channels," he says. "It was difficult for me to find, so I was like, 'Here's an opportunity.'"

With experience building websites—including Ski Resort Jobs, a job board for ski resorts in Canada and New Zealand; Ski Resort Rooms, an accommodations site for resorts; and an Australian app called iBackpacker, a job app for backpackers—Martz saw an opportunity.

Last month, he launched Quaranstream, a website that collects information on upcoming livestreams, links to archived shows, features a calendar you can subscribe to for reminders of concerts, and, more recently, includes a Zoom watch party feature.

It didn't take long before Martz found himself overwhelmed with keeping the website up-to-date and promoting it. That was when a serendipitous direct message arrived via Twitter from Nick Gooding in Newport Beach, Calif.

"He was like, 'I was building something similar.' We should work together," Martz says. "Already, the work was piling up for me. We had a good video chat and our interest seemed pretty aligned. We both love electronic music and he had some good ideas about where to take the platform."

Gooding quickly came on board to handle the developer side of the website while Martz tackled the business and management aspects.

While initially Quaranstream focused on electronic music, it has since expanded to include pop and rock streams.

"People have been good about suggesting ways we can improve it," Martz adds. "It's a free services to use; we're happy to take anyone's feedback."

Under the province's phased restart plan, live concerts won't be returning to B.C. until a vaccine is widely available. To that end, Martz sees livestream concerts and festivals as a permanent addition to the live music landscape.

"I think it will stick around indefinitely even after the virus goes away," he says. "People are getting so much enjoyment out of it. In a lot of places, people can't go to festivals."

In the meantime, he says he's not alone in ditching streaming services like Spotify for background music and, instead, playing recent, archived livestreamed concerts in the background throughout his day.

"Long term, I want Quaranstream to be the go-to place to find upcoming and on-demand livestreams," he says. "You don't have to go to all the social media profiles. We're saving people time."

Check it out at www.quaranstream.video.