More than a Sublime experience 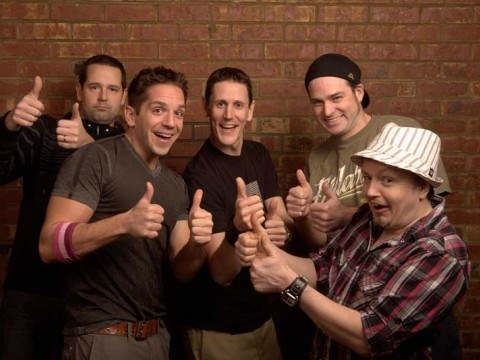 If you've lived in Whistler for any length of time, chances are you've caught a performance by the Redeye Empire. That's because even though these musicians live in Vancouver, their heart seems to remain in this mountain town, where their brand of upbeat reggae rock resonates with the laidback, party-hardy locals.

"They can relate to our music better than people in big urban centres, not that those people don't enjoy it," said Mike Redmond, vocalist and guitar player for the band. "There's definitely something in the music that I think that's for an outdoorsy, adventurous person."

With Redmond and Gabe Davis on vocals and guitar, Eric Stephenson on bass, Andre Arsenault on lead guitar and Ryan Davis on drums, the "Empire" has had a busy year.

This summer, rather than touring around the States, they stayed in B.C., touring mountain towns and the Interior to build up a stronger local fan base.

"We have an inkling to go towards the mountains," Redmond laughed. "So we spent a lot of time in Kelowna and Revelstoke and Golden and all those places. A lot of ski towns, which is unfortunate during the summer, because I'm a skier."

They've also been toiling tirelessly behind the scenes, getting their third album ready to unleash onto the masses. Named in honour of the region, Sea to Sky is definitely a solid choice to pop into the CD player when you're cruising Highway 99. It's a blend of reggae rock that also incorporates elements of ska, pop and funk.

While at least one of the tracks, Oh I Say, is an upbeat, poppy party rocker, the others are actually a bit mellower, by Redeye standards, with the majority of the tracks falling under the reggae/dub category.

"It's a lot more heavier and slightly slower beats and tempos," Redmond explained.

The group's writing approach is collaborative, with Redmond and Gabe Davis sitting around playing acoustic guitar and developing the general structure and framework for the songs, with some loose lyrics. Then, they take it to the rest of the group and they work on it together.

"It moulds and transforms as soon as everyone else starts putting their two bits in," Redmond said.

Lyrically, their music is inspired by "everything under the sun," with songs touching on everything from love to global issues. Even the cover artwork of Sea to Sky is a cut above the last, with a bright and vibrant illustration of a swooping eagle set against a backdrop of mountains and crashing waves.

They began recording the 11-track album in the fall, working with producer Ben Kaplan to create something that paid homage to their favourite bands, like Pepper, Slightly Stoopid and Fishbone, while still developing their own voice and sound.

With all of the members coming from different musical backgrounds and tastes - involved in jam bands and reggae groups - it took a while to merge their collective musical experiences and styles. But after almost four years of making music together, the group is finally satisfied with the cohesive sound that has emerged on Sea to Sky .

"I think this album definitely shows the most growth. I think in the past, we tried to overcomplicate a lot of our song writing. Now, we're kind of just getting back to the basics. We want things really simple, really straightforward, so I think in doing that, we've really established what as an individual, we like hearing in each song."

They'll be releasing Sea to Sky at an epic party at Dusty's on Saturday, Jan. 16. The show will feature a special Sublime cover set, with the band playing a selection of the infamous group's greatest hits as a teaser to get the dance floor seriously rocking, to celebrate the release of their latest album and to mark the Olympic closure of Dusty's. But they'll also be sure to play loads of their own original material so fans can check out what they've been up to.

The third time may just prove to be a charm with this B.C. band, which is set to embark on their third U.S. tour and release their third full-length CD. Never ones to rest idle, the Empire is now busily preparing for a tour that will see them working with G. Love and the Special Sauce starting Feb. 3 and running through the end of the month. That means they'll be missing out on the Olympic fun (or madness).

They're no strangers to supporting big name bands - they've already toured with the likes of Fishbone and Pepper, playing gigs in more than 30 American cities - but the Empire is particularly stoked on this tour. They will be opening 18 shows for G. Love and The Special Sauce throughout Louisiana, Texas, Arizona, California, Oregon, Washington and Idaho. They will also be playing at legendary venues like the House of Blues in New Orleans and the Fillmore in San Francisco.