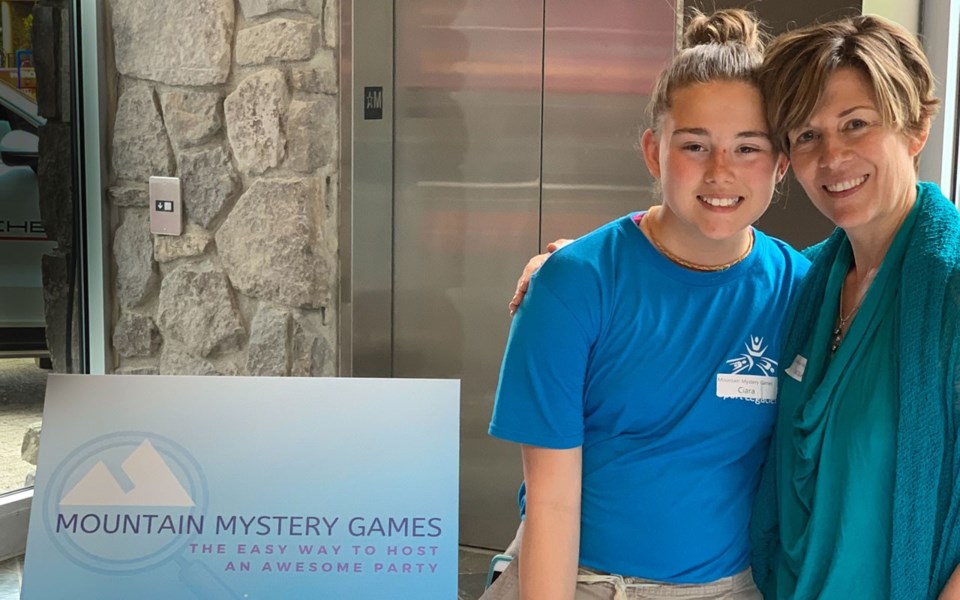 Last year, in the middle of winter, neighbours of Jacqueline Maartense and Ciara Giesebrecht showed up for a visit dressed better suited for a California afternoon than a snowy Whistler night.

"It was snowing out and one of them was in high heels, a neon pink dress with pink sunglasses and a wig," Maartense recalls. "Her husband came dressed up as well and sported an accent all night. It started out French and ended up German."

No, the couple hadn't lost their marbles—rather they were whole-heartedly embracing their duty of testing out Mountain Mystery Games' Avalanche. The Whistler-themed live murder-mystery game had started out last January as a fun way to fundraise for Giesebrecht's school.

It was a hit and Maartense, her mom, envisioned launching it as a company to help teach her daughter entrepreneurial skills (she's been teaching the Junior Achievement program in local schools as well), help people disconnect from their phones and reconnect with each other, and fundraise for Kiva, a global micro-lending, non-profit organization that helps support small business in developing countries.

"The idea behind it is that it helps female entrepreneurs in third-world countries," Giesebrecht adds.

Most recently, they were at Whistler's Inside Scoop Tradeshow last week to sell the game as a team-building opportunity for local businesses.

"We tested it with friends and family and locals. It was a huge success," Maartense says. "So we got extra motivated and decided to develop the story into a bigger business idea."

For the project, the mother-daughter pair wrote between 60 and 70 pages of character descriptions and scripts. It works like this: anywhere from eight to 100 people—ages 10 and up—are assigned a character or the role of detective. One person is the killer—but that remains a mystery to even the host assigning the roles until the end.

The game begins with audio and video from your phone (which you're encouraged to put away after the initial message and the character assignments). Then guests spend the evening interviewing each other about motives, means, and opportunity.

In the end, players guess who served as the killer. "After you pass accusations about why you chose each killer then you listen to audio and find out who it is," Maartense says. "Then you can put out prizes for best characters and best actors."

For her part, Giesebrecht, who's 13 and entering Grade 8 at Whistler Waldorf in the fall, is hoping to take the helm of a new storyline going forward.

"She wants to write her own for BratzBiz targeted at younger audiences," Maartense says. "It's going to be circus themed."

For now, though, the mother-daughter duo is focused on spreading the word about their game, which is available to purchase at mountainmysterygames.com. Because it's available entirely online, they're hoping to reach a market beyond Whistler as well.

"The real idea is to put (the phone) away and interact face-to-face," Maartense says. "That's the hope."