In 1981 there were plenty of ways for those interested to get involved in the sport, from novices to international competitors.
May 3, 2021 10:00 AM By: Allyn Pringle 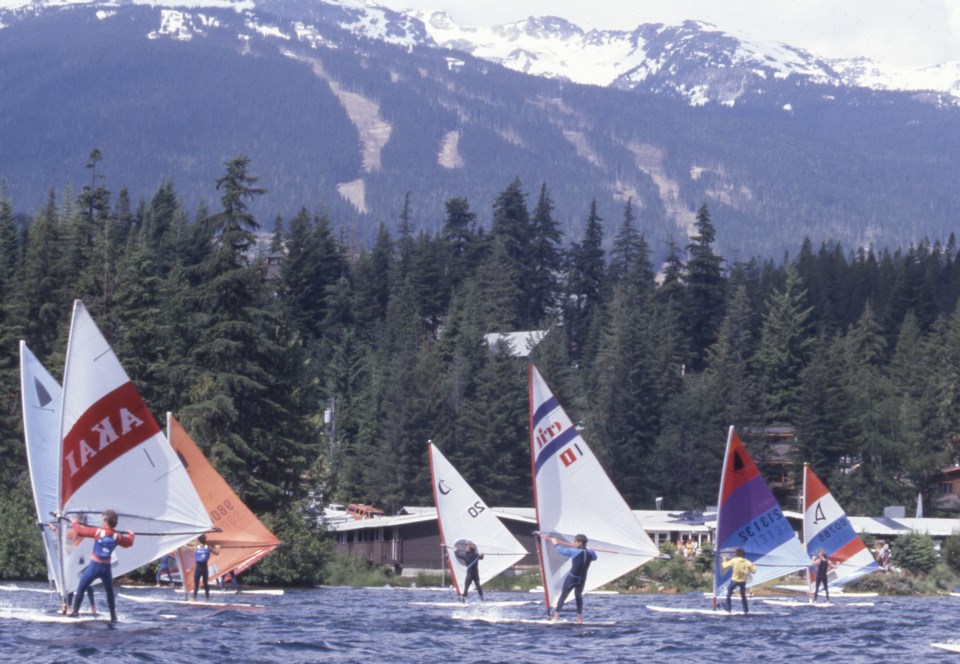 Windsurfers on Alta Lake, sometime between 1981 and 1983. George Benjamin Collection

Before summers in Whistler drew mountain bikers to the area, Whistler was gaining a reputation for a sport that took place on the water: Windsurfing. As the sport of windsurfing became more popular in the late 1970s and early 1980s, Alta Lake became a hotspot for many Canadian windsurfers, as shown in the many photos from the 1980s that feature windsurfers of various ages, skill, and standards of dress.

According to Jinny Ladner, a former Canadian windsurfing champion, the first board was brought to Whistler by Mark Dufus in 1975, though not many people in the valley knew much about the sport at the time. Looking at reports from the summer of 1981, however, it would appear that once windsurfing was introduced to Whistler, it took hold and grew quickly.

While you might think that May 1981 would have marked the beginning of the windsurfing season in Whistler, apparently a few hardy souls had already been seen with the boards on Alta Lake as of Jan. 1. For most windsurfers, however, in May the season was just getting started.

According to the Squamish Citizen Shopper, Whistler Windsurfing and Blackcombe Sports were the two main businesses offering rentals and instruction. For newcomers to the sport, the Citizen noted that, “in consideration of the fact that learning how to windsurf involves falling in the water quite a bit, anyone wishing to take lessons should be able to swim.”

In 1981 there were plenty of ways for those interested to get involved in the sport, from novices to international competitors. Blackcombe Sports offered membership to the Blackcombe Boardsailing Club, which included free use of a board for the summer, discounts on lessons and sales, and free entry into all club-sponsored events. Whistler Windsurfing co-sponsored an instructor course with the Canadian Yachting Association and the British Columbia Sailing Association. They also ran the Whistler Windsurfing Summer Series, a series of weekly races beginning in early June. Race results were tallied to come up with a monthly winner and at the end of the summer, the monthly winners would compete to become the overall winner.

Other windsurfing events held on Alta Lake that summer included the Whistler regatta in June, the British Columbia Championships in August, and Whistler’s first Great Waters Race in September, though the Great Waters Race was not strictly speaking a windsurfing event. As part of the Whistler Fall Festival, five-person teams (at least two of which had to be women) competed in canoeing, swimming and kayaking along with windsurfing. The windsurfing portion of the race may not have been the most successful, as it was later described by the Whistler Question as “a paddling race due to lack of wind.”

Whistler residents were well represented at the Canadian Windsurf Championships in September that year. Jinny Ladner and Andrew Stoner (one of the organizers of the Summer Series along with Doug Schull) earned places as two of the five Canadians travelling to the Windsurf World Championships in Okinawa later that year.

Windsurfing remained a prominent sport on Alta Lake through the 1980s and 1990s, but the sport experienced a decline in popularity in the late 1990s. While it is less often that you will come across windsurfers on Whistler’s lakes, windsurfing has seen a resurgence in the last decade and windsurfers and kitesurfers will often be found in Squamish.