Music coming to the mountains 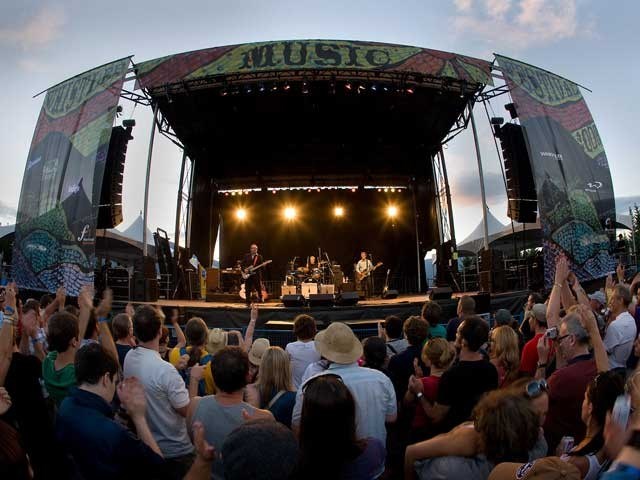 More Music Last year’s Whistler Music Festival had an impressive line-up, but didn’t draw the crowds that organizers had hoped for. Photo by Brad Kasselman, coastphoto.com.

All is not lost for Whistler's many music lovers. While Pemberton Festival may be on hiatus this summer, and the Festival Network has called it quits after the first Whistler Music Festival, a local company has stepped up with plans to put on yet another outdoor music event.

Sue Eckersley, president of Watermark Communications, is organizing the inaugural Mountain West Music Fest, which will take place from Aug. 21 to 23, featuring a diverse offering of four to five acts per day. The festival will kick off on Friday night with shows at local bars, and move to the outdoor realm of the Whistler Golf Club driving range on Saturday and Sunday, aiming to draw a crowd of 2,000 to 5,000 people per day.

"I think that, for me, there isn't enough great music in Whistler," Eckersley said. "There are only a few opportunities a year to go and experience a great festival scene, and it seems like it's such a good fit for this community. It seems such a shame not to have this opportunity available to Whistler and its citizens, but also to the visitors."

Though Eckersley wouldn't announce details of the lineup just yet - they're still in negotiation stages with many of the groups - she emphasized they have been careful to pick real "festival bands" that will appeal to a wide range of music lovers, and ones that already have loyal followings of fans expected to snap up tickets to the event.

"We're not going small in terms of the bands that we're looking at," she added.

One of the headlining groups has been to Whistler before, and Eckersley is confident that the two headliners would each sell 800 tickets to just the local crowd. The Rastrillos, a 12-piece Mexican reggae band, has been confirmed as one of the opening acts, set to take the stage on Saturday.

"The real challenge in the summer is that there are so many summer festivals that the good artists that we're talking about - the ones that sort of sit in that zone that makes sense for us - also make sense for a hundred other festivals."

While they haven't finalized ticket pricing, Watermark's aim is to keep the cost reasonable. They've already budgeted for staging and sound, received permission for placement on the driving range from Tourism Whistler, and are in the process of securing sponsorships and partnerships to help mitigate the financial risks.

Eckersley has been kicking around the idea of a summer music festival for about four or five years and was thinking about trying to stage one last summer, before she heard plans for Pemberton Festival and Whistler Music Festival.

"Obviously, it's pretty risky for, us especially in this economic environment, but it feels like it's the right thing to do," she said.

In the future, Mountain West could expand to a 10-day event that would take place on Celebration Plaza.

"I don't care if I make a penny. It would be nice to," she said with a laugh. "...But that's not the goal. The goal is to put on an event that we're proud of, that we can again show what Whistler has to offer, to boost the people that live here and the people that visit, and just have a great time over a weekend."

Arlene Schieven is the vice president of marketing for Tourism Whistler, which is playing an active role in supporting Mountain West Music Fest. Tourism Whistler is helping with things like marketing, advertising and public relations, without taking a role in the planning side of the event.

"With Watermark's experience in producing events and their interest in putting this on, we were very happy that they were stepping forward," Schieven said. "...We're really looking forward to having a successful event. It really helps the summer business, and we can see from other events that it definitely does drive room nights."

"In the end, I think they put together a really good lineup, but the problem was it came out far too late. So in terms of the marketing effort that went behind it, people had already made their plans - it was far too late to get the numbers they needed to make it a successful event," Schieven said.

Watermark is taking a bit of a different approach to its music festival, focusing on developing a solid lineup of talent, keeping tickets affordable, and utilizing lead time to market the event properly.

"The most difficult thing about the Whistler market is that we don't have a big enough market to support these big events on their own, yet our market is constantly transient, and I don't mean transient by our Australians or our workforce," Eckersley said. "But as in, like, somebody flies in for two weeks from France, well, how do you manage to hit them with effective marketing about this event that's coming?"

In this case, they'll be relying heavily on visitors from the Lower Mainland.

"I think that one of the unique positions that we're in is that we have resources that aren't cash-connected. We can work with Tourism Whistler, we can work with Whistler Blackcomb," Eckersley said.

Watermark is already pretty entrenched in the community, organizing events like First Night, Cornucopia, and the Telus World Ski and Snowboard Festival, so they're familiar with the Whistler market.

But ultimately, Eckersley believes the success of the event will depend on whether the community comes together to support it.

"One of the messages I'm going to be trying to get out to the community is, 'this is your opportunity to support a festival that is owned and operated in Whistler. Either support it or don't, but this is probably our last kick at the can.'"