Musical mirth at MY Place

An evening of humour and song with Canadian comedian Lorne Elliott
Oct 2, 2009 8:37 AM By: Holly Fraughton 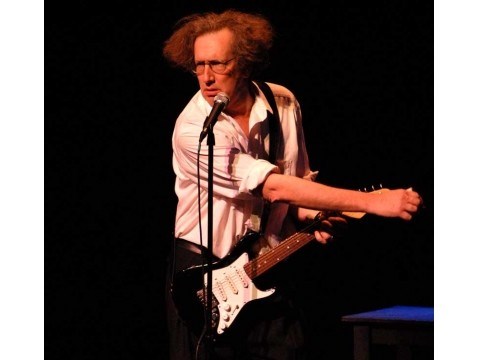 The mere idea of standing in the spotlight with the sole purpose of making an audience laugh is the stuff of nightmares for most. But not Lorne Elliott.

This Quebec-born comedian has gotten quite comfortable on stage since he made his debut in the early '70s. But he didn't set out to launch a career in comedy; he was interested in being a musician.

"At first, it was music, but music kind of gave me the license to get on stage," he said in a recent interview.

At the age of 17, he moved to Newfoundland to go to school and ended up learning the ins and outs of folk music, stepping onto the stage for the first time.

"It's Newfoundland, so to get through a night in front of an audience, it behooved you to know a couple jokes and also a couple Newfoundland folk songs," he said.

He also used to perform the odd Irish "drunk rock" set at the infamous Lower Deck pub in Halifax.

"I was very lucky that it was kind of a gradual thing - I didn't have to go on stage with 15 minutes of material or half an hour of material. It was always like a song and then, if a string breaks, you tell a joke. And I've always written, so I figured I'd write jokes."

Music is still very much a part of his life, and his act. Today, Elliott crafts fun ditties with amusing lyrics to incorporate into his act. Hits like When Granny Gets Plastered and My Dog Has Fleas have become audience favourites.

"I've always liked variety and the audience seems to like it too, so I'd be a fool to give that up," he said.

He is continuously writing and making music that he works into his comedy act, which in the end, makes for a much more dynamic performance than just straight stand-up.

"Once stand-up comedy became a force to be reckoned with (in the mid-80s), immediately, this class structure, hierarchical structure (emerged) with pure stand-ups up top and comedians with guitar, and then jugglers way below," Elliott said.

On top of his work as a humourist, musician and all-around storyteller, Elliott is also a playwright. In fact, his play The Night the Raccoons Went Berserk won the Best New Play Award at the Quebec Drama Festival in 1983. More recently, he produced a musical about a fictitious country pop, rock and roll singer from Newfoundland.

"It's just because a lot of theatres are doing these clone shows of Creedence Clearwater Revival and I thought, to me, theatre should be about more than that. So I thought I'd do a tribute show to a band that never existed," he laughed.

His creative process is intentional, but fluid, with room to change.

"I try to think of an idea and if it suggests a musical treatment, then I'll go in that direction, but if some of the jokes don't really work in the song form, I'll take them out and put them in the show, so it can end up either way," he explained. "I just keep toying with it."

He also manages to include a healthy mix of observational, regional humour into his live performances.

"It keeps me in the moment and thinking about where I'm at," he said. "...You're responding to the environment that you're in, and if people share that environment, they're likely to share the same relevance to what you're saying."

So, for example, here in Whistler, we can probably expect a few cracks about the Olympics.

"I'm from Montreal," he said with a laugh. "We're still paying the damn thing off."

With such a diverse range of interests and talents, it should be no surprise that Elliott's live performances are truly original and engaging for just about anyone in the audience. Any given show includes monologues and snappy, timeless one-liners coupled with the odd laugh-inducing song, which he sings while he plays the little guitar that he casually loops around his neck.

You may recognize Elliott's name and distinct brand of humour from his weekly CBC Radio Comedy Series, Madly Off In All Directions, which was taped at concerts across Canada and aired for 11 seasons starting in January 1996.

Over the years, Elliott has also taken his one-man show to theatres, universities and clubs throughout North America and even further abroad. He was a regular for years at the annual Just For Laughs comedy festival in Montreal and has opened for the likes of Rodney Dangerfield and Jay Leno. Now, he's kicking off a month-long tour of B.C. with his show The Collected Mistakes and Whistler's on the list with a performance on Saturday evening.

A chorus of boos ensued.

While Elliott hasn't been to Whistler for three or four years, he is sure to be met with a much warmer reception, here (let's hope).

"We started coming about 15 years ago and it was a sleepy little ski town, and every time we come back, it's been more elaborate, like this fold out toy," Elliott said.

Elliott will take the stage at MY Millennium Place on Saturday night to kick off the Whistler Arts Council's annual Performance Series, which runs from October to May, 2010.