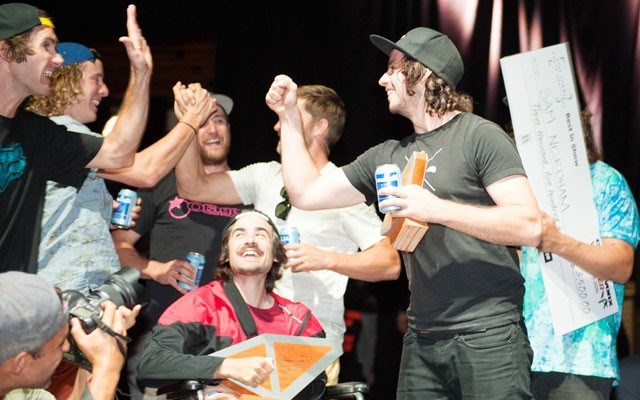 British photographer Sam Needham is the King of Deep Summer.

"It feels incredible. I actually didn't think I'd get that. The competition was really tough," said Needham, in a release.

His photo slideshow, "Life is a Journey" tells the story of a day out riding on the trails of Whistler — and includes a side trip to the Whistler Health Care Centre to treat a broken ankle, and drinks at the end of the day. It took home first place and $3,500 at the Crankworx competition.

Needham says he aimed to capture the fun of the resort.

"You don't come here to have a crap time. You come here to ride bikes, party, chill — that was the vibe we were going for, and hopefully it came across," he said.

Their slideshows were comprised of photos taken over three days around the resort and region.

Three distinctions were awarded for the best photo in three categories — Black Tusk, which went to Crossman-Emms, and Garbanzo Tree Island Hip Jump and GLC Drop, both of which were won by Needham.

His slideshow told the story of the connection of nature to the region and opened with comments from Josh Anderson of the Lil'wat Nation.

The prize was awarded by the audience and by online votes."This year the emphasis has been on breaking the mould and making photographers push themselves to get under the veil and present the true story of Whistler," said Seb Kemp, Deep Summer organizer."We've selected some truly expressive and artistic shooters to come to Whistler and interpret what a thousand people have done before them. The photographers... really think hard about how they express themselves and challenge their capabilities."

The Whistler Writers Festival is holding a competition to win a pass to this year's event.

In addition to the all-inclusive festival pass, the winning entry will also receive two nights' accommodation at the Fairmont Chateau Whistler, partner hotel of the festival.

To enter the contest, entrants need to visit the festival's website, and suggest an idea for an event or a favourite author they'd like to have participate in a reading or workshop in a future festival.

The Whistler Writers Festival will choose a winning entry. The contest closes on Friday, Sept. 18, and the winner will be announced on Monday, Sept. 21.

The festival takes place from Oct. 15 to 18, 2015. Visit www.whistlerwritersfest.com to enter the festival.