Never fear, The Enigma is here

Celebrated sideshow performer brings his Show Devils act to Merlin’s this Friday and Saturday
Nov 23, 2011 10:02 AM By: Stephen Smysnuik 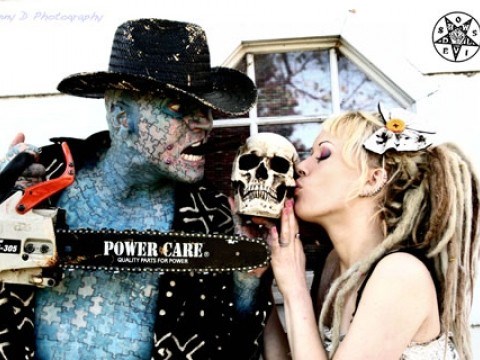 Freak shows are all the same. Hollywood is essentially a carnival human curiosity exhibit on a much larger scale. The main difference between the Elephant Man and, say, Heidi Montag is time and place. How - and why - the audience reacts as they do has remained the same for over well over a century.

It's a concept that The Enigma, the sideshow performer best known for his full-body jigsaw puzzle tattoo and his appearances on X-Files and Ripley's "Believe it or Not?" , knows very intimately.

"When you can exploit your own self, then you know you have a steady product. You're in it for life," he says with a laugh. "Even people back in the day, it's the same then as it is today. It's always been a capitalist market. Those who can make an income based on what they do or their appearance even, that's what makes money, that's what draws. People want to see interesting people."

In that way, the tabloids documenting Hollywood's plastic surgery nightmares, which are appearing more frequently, are a descendent of the carnival sideshows. In the case of Heidi Montag of The Hills, who underwent dozens of plastic surgeries (and 10 in one day) to dramatically alter her appearance, the world zeroed in on her surgeries as the extreme end result of a culture obsessed with appearance.

TV programs and blog posts were dedicated to analyzing the culture that allowed this to happen. They analyzed Montag's psyche but discussed why this event was an event at all - why this was a matter of importance to the person writing the blog post.

"People love people who really are themselves," The Enigma says, simply.

He has, not surprisingly, faced his share of scrutiny. In 1992, he appeared, along with the rest of the Jim Rose Circus, a troupe of sideshow performers he co-founded in 1992, on Sally Jesse Raphael, that bastion of talk-show sensationalism where murderers, child molesters and freaks of all sorts were invited on to bear public scrutiny.

He speaks with the clarity and depth of a philosophy major, interjected with slices of black humour. He says he had no intention of tattooing his entire body. It came about as a mere flight of fancy.

"But I take my flights of fancy seriously," he says. "It was all just a whim but life itself can just be a whim. A lot of people do art in their lifetimes and some people live their life as art and that's what I'm trying."

Born Paul Lawrence, he was raised outside of Seattle, "living off of comic books and casseroles, as it were." He was taking music, singing and dancing lessons by the age of six. By 15, obsessed with sideshow performance art, he began swallowing swords, pounding spikes into his skull and eating fire.

He began tattooing the jigsaw puzzle in 1992. He's also had two subdermal implants on his forehead, creating horns, and re-shaped both his ears to resemble jigsaw puzzle pieces. For 20 years, he's married his sideshow performance with the song-and-dance training of his childhood.

For six years, he travelled the U.S. with the Jim Rose Circus, a maniacal, masochistic stage show if there ever was one. He'd swallow anything and everything: bugs, swords, fire. The Circus gained notoriety as part of the 1992 Lollapalooza tour. In 1995, he made his infamous appearance on the X-Files episode "Humbug;" an action figure was later made of his character in the episode.

He left the Circus in 1998 to tour on his own, perfecting his act into what would eventually become the Show Devils, which he promises, is more dangerous than any show out there.

Together with Serena Rose, they put blindfolds on, they put apples in their mouths and they carve them up with chainsaws...among other things.

"These aren't cool juggling chainsaws with fake blades or anything like that, because that would take away the fun for us," he says.

Some may question the necessity, or the sanity, in this line of work, but for both The Enigma and Serena Rose, it's pure art. Some people do art in their lifetime, he says. Others live their lives as art.

But, beyond that, by demonstrating the impossible, The Enigma is offering the regular working folk a chance to glimpse "real magic."

"You're going to school, exchanging dreams of boundless grandeur for realities of very little worth. You're always looking for that doorway to another dimension, that magic ring of invisibility or something, but here (is) real magic because when everyone believes one thing and you show them another, the truth appears as magic," he says.

But perhaps most important of all: Serena Rose has seven secrets. She will reveal them all. The Enigma divulged none of them but laid a hint: blades penetrate body parts that, well, shouldn't be penetrated.