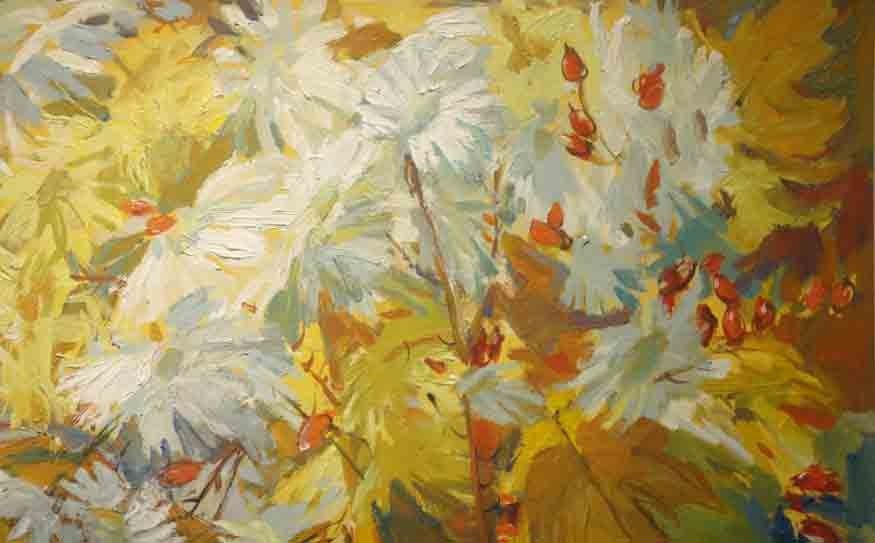 Three out of four valuable pieces of art that recently came into the Re-Use-It Centre in Function Junction have new homes.

New owners have snapped up three of the works while a fourth will hopefully find a home over the holiday season through a new marketing approach.

Re-Use-It manager Cheryl Skribe announced this summer that four rare works left with the centre would be auctioned off. While the high-end art market isn't a customer base the Re-Use-It Centre is accustomed to serving, the Whistler Community Services Society (WCSS) received the proceeds from three sales.

Yellow White and Gold."That piece did not sell, so the WCSS and the White Dog Studio Gallery are collaborating on this and future pieces as a way to gain some credibility for the art," said Eder.

Lorna Van Straaten, the executive director with WCSS, is a friend of Eder and Van Straaten's jewelry creations are sold at the White Dog studio. Together the pair concluded that featuring the Bice art work in the Art — Out with the Old event made sense.

Eder is encouraging art owners who want to make room for new pieces by clearing out some old art to bring the old works to her studio for evaluation before Dec. 29. From that date through to Jan. 3 all the art brought in for auctioning will be available to view and bids will be accepted.

Eder said she plans to put a minimum bid of $750 on the work by Bice. She noted that along with the art by Bice the holiday auction would include at least one sculpture and seven other pieces of art.

Eder pointed out that works by Bice have sold at auction for up to $2,500.Bice died in 1976 and in his life he wrote and illustrated children's books while also working as a curator. Bice's body of work includes landscapes and portraits.

He was made a member of the Order of Canada in 1973 for his contribution to the arts."It's got some really interesting writing on the back," said Eder. "He absolutely was a very thorough artist to have everything documented."

Eder believes the piece was the 16th piece he made in 1976. The Bice painting and the other pieces will be sold through a silent auction.

Whatever price the Bice art sells for, Eder said the result will be a win-win with the new owner getting a fabulous piece of art while the WCSS will also get a needed infusion of cash for community programs.

Egg Nog is pretty foul stuff (and not just because its French name translates back to "Milk of Chicken") but otherwise Christmas is pretty fun. Trees, gifts and good movies in the theatre. Early press deadlines mean I'm unsure what's happening at the Village 8 next week, but keep your eyes open for Killing Them Softly, the new gangster drama-comedy starring Brad Pitt, James Gandolfini, Ray Liotta and the always awesome Richard Jenkins.

Katherine Bigelow and writer Mark Boal (The Hurt Locker) have a new film out called Zero Dark Thirty about the hunt for Bin Ladin. There is a lot of thought put into it and some gnarly torture but it's making a lot of noise and will be worth seeing. Also, Quentin Tarantino's latest drops Christmas day. Django Unchained is some kind of slavery/western/revenge/manhunt flick that sounds like the perfect 2-hour-46-minute Christmas gift to myself. Jamie Foxx, Kristoph Waltz, Sam Jackson and Leo DiCaprio star.

But Christmas is also a good time for not leaving the couch. Everyone loves Bill Murray in Scrooged, Chevy Chase in National Lampoons Christmas Vacation and Macauley Culkin in the first Home Alone, but these classics are overplayed. What about the lesser-known Christmas movies? The ones that don't hit you in the face with a snow shovel full of holiday cheer or schmaltzy family messaging?

Here are the red-haired stepchildren of Yuletide films — Five Christmas movies your grandmother will probably hate.

Treevenge (2008) — Always topping the list, this short-film environmentalist masterpiece stars J-Roc (Jonathan Torrens) and was made by the Canadian filmmakers behind Hobo With A Shotgun. It's freely available online and is a standard Christmas-night viewing at my place.

Gremlins (1984) — The "Mowgai" was a Christmas gift gone wrong. Produced by Speilberg, directed by Joe Dante (who made the original Piranha) and featuring Phoebe Cates (the girl from the pool in Fast Times at Ridgemont) delivering one of the best stories ever — "...and that's how I found out there was no Santa Claus." Plus, this one has aged well. The animatronic monsters only look better after almost 30 years.

Beat Street (1984) — It's Christmas in the Bronx and Santa ain't bringin' nuttin' so if you want to make it as a DJ/B-Boy/graffiti artist or promoter, you'd best get your hustle on and make that shit happen yourself. Hip gop culture has always embraced Christmas and this is a classic (plus The Treacherous Three lay down a pretty killer "Santa Rap" to boot).

Go (1999) — The lesson to be learned here is: giant Christmas Rave or not, one should never buy or sell drugs from or to strangers. Go is a comedy of errors with a few extra bumps. Starring a sackfull of now-known actors (Katie Holmes, Sarah Polley, Tim Olyphant), Go was the movie Doug Liman made after his big-time success with Swingers but before the Bourne stuff. It's a gem.

Night of the Comet (1984) — I've actually never even seen this one but it's apparently about a huge, mysterious comet with an orbit that brings it close enough to earth to kill us all! And it all goes down on Christmas Eve 1984 (which is close enough to December 21, 2012 that it makes the list.)

Watch them all with a double Rum and Chicken Milk. Merry Christmas.